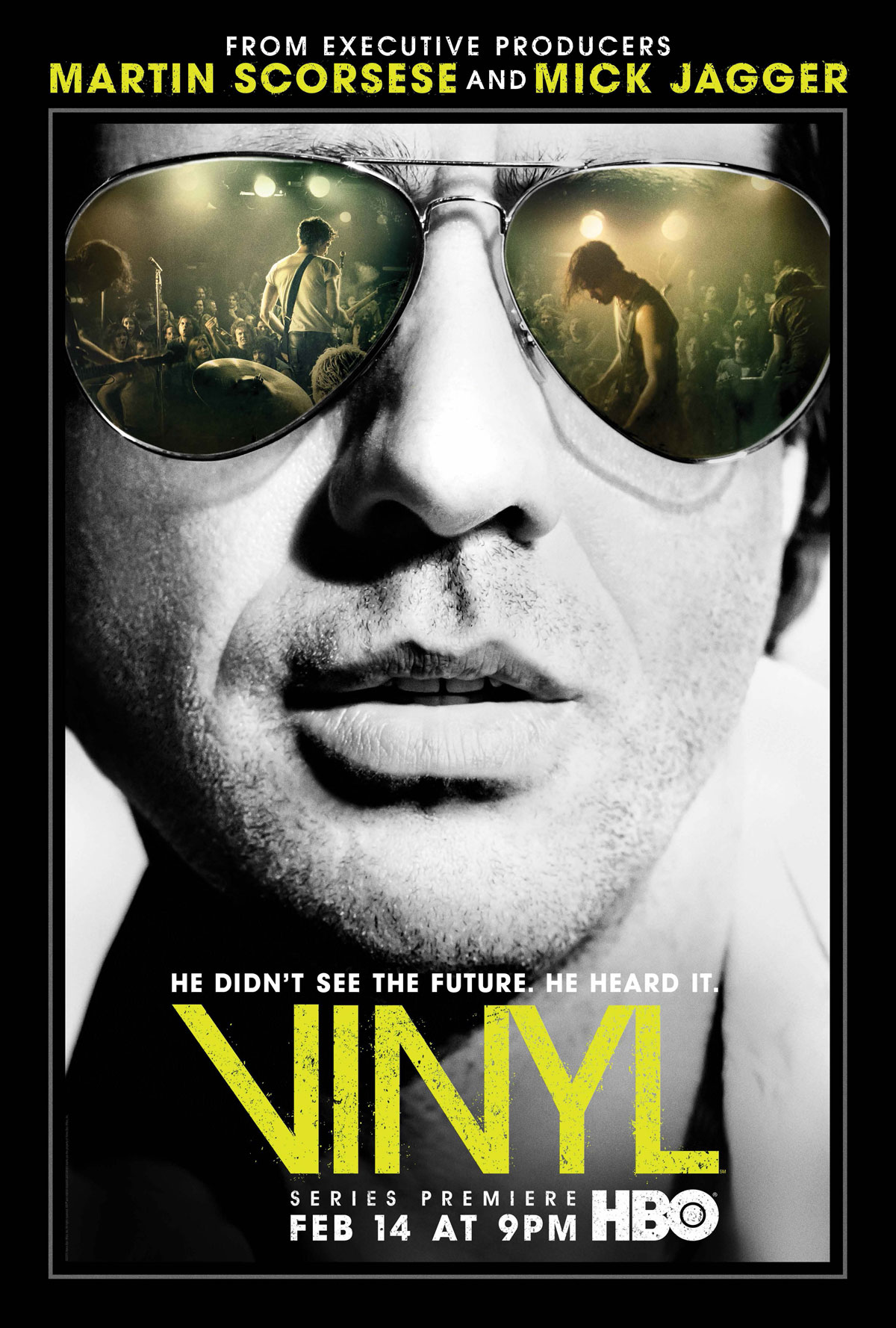 This is a show whose tagline is “He didn’t see the future. He heard it.” Thing is, after two episodes of Vinyl, we could see the show’s future, and it didn’t look so hot. That despite (or perhaps because of) some really great set design and clearly a lot of thought put into the period 1973 look of the thing. And that’s kind of where the wonder stopped. After all, music is subjective and this particular era of music is something that in this day and age of self-serve digital tunes is super-niche and really only interesting to an aging group of white New Yorkers who vaguely remember a time when guys like Richie Finestra (pictured in his mirrored shades on the poster) were cool, let alone a thing that actually existed. When I say “payola” or “record executive” or “radio programming” to anyone under the age of 45 their eyes glaze over and they generally look down at their iPhone to see if they’ve caught a Pokémon. Granted, it’s something — as a person who enjoys music, has listened to a lot of radio and old music and has worked at music labels — that definitely interested me, so color me old as shit. Throw in executive producers Scorsese and even a post-Freejack Mick Jagger and it gives it even more of a level of interest, because who would know that time better than the lead singer of The Rolling Stones and the director who made some of the coolest movies of that age?

So in my mind this has fun written all over it. But then we get Bobby Cannavale in the lead role. I don’t normally mind him much, as he’s usually like the abusive/dumb boyfriend or the bully or the cop or whatever. But as the lead his manic energy and completely over-the-top acting gave the show a really weird vibe. It could have been the coke he was snorting every two seconds (which, by the way, never having done coke, can’t possibly be as intense and annoying as he made it look) but the guy spends 90% of the show ranting and throwing himself around like a rhino in a closet. There is absolutely nothing subtle about his performance and after a while I just felt I needed to pause the show to give myself a break from his franticness. I mean for a guy who claimed to care about the music so much, he really didn’t seem to give a shit at all. And there’s the crux of the issue, and probably what got the show canceled: all the beautiful (and extraordinarily expensive) set decoration in the world and all of the talk of “it’s the music, it’s the music” only works if the people on the show and the viewers at home actually care about the music. It seemed, however much they preached it, that Scorsese and company didn’t trust that the music was enough and had to stick all this side bullshit in with gangsters and Forest Gump-like run-ins with historical figures to spice it up, and ultimately all that side-action was its downfall. There was too much in the way of eye candy and kitschy moments to make for a cohesive show, and when they weren’t bringing in scenes involving Warhol or Elvis Presley, they were showing us esoteric dealings with a Sam Goody store over Donny Osmond record returns. And there go those eyes glazing over again, because if there’s anything the kids love more than radio station politics, it’s record distribution and sales finance.

That’s not to say it was all bad. There were times I was entertained, but there were also a lot of Cameron Crowe moments they went for that just fell completely flat. The scripts felt hokey and the filming did too. There’s a scene where Richie, in a stroke of “genius,” decides that in order to think differently in trying to modernize his music label, gives all of his employees bottles of spray paint and the green light to essentially smash and dismantle their offices. It makes absolutely no sense. And makes even less sense after those employees, who then had to work in the space, completely destroy it. Woohoo, how punk. And don’t get me started on The Nasty Bits. Fronted by Mick Jagger’s son, James, they are what amounts to a pretty basic English garage band that Richie claims is going to be the savior of their stupid music label. Really? A band in the age of radio play who would never in a million years get radio play? A band they think will financially save them? It’s the equivalent of A&M Records thinking that they could save their sinking ship by signing Jay Reatard. But like Jay Reatard if he had absolutely no talent (and wasn’t dead) and basically ripped off old blues tunes from his manager’s old catalog. The issue was that there was nowhere for this thing to go along the main storyline. There were some side tangents that involved a murder, gangsters and the NYC art scene, as well as lots and lots of Richie’s personal life. But to watch the label deteriorate and fall into the dust of history just didn’t seem like a place from which it could come back.

That all said, there was something here. Something that died in the bright light of vanity or poor planning. Something that we apparently will only get one season of — until someone reboots it in 2026 as a 2016 nostalgia piece for the nostalgia of 1973.