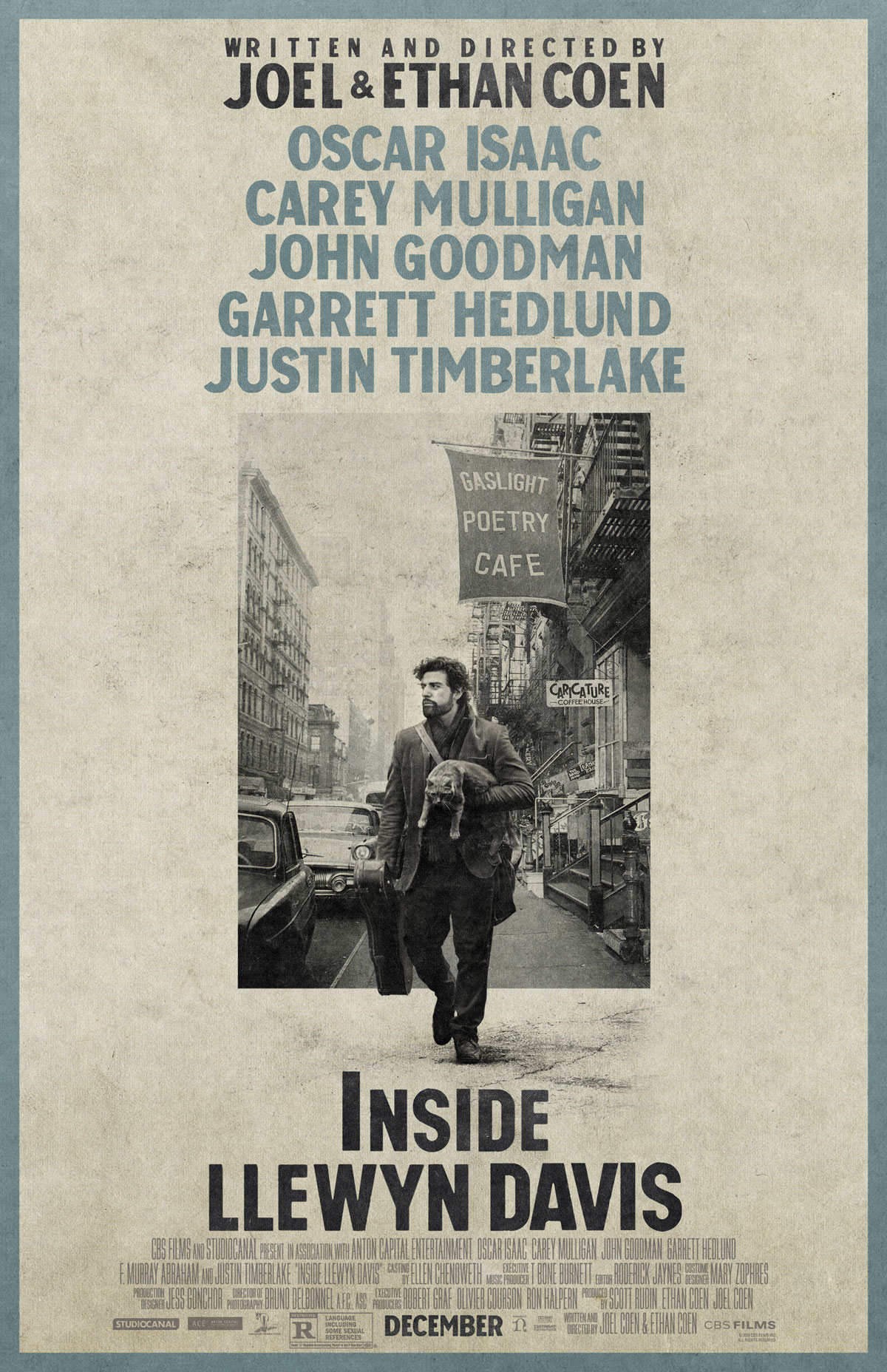 The Coen Brothers are so good at making these subtle period pieces that have next-to-no plot, but somehow convey a depth that movies with much more complex narratives can’t. You’re just kind of dropped into a world, live in it for a bit and come out the other end with a real sense for things. And sure there are some goofy things that occasionally happen in them — unlike The Coen’s intentionally goofy films. And some goofy characters. But they’re serious life movies without the weight of being super-serious. Or at the least the veneer of being heavy.

Set in 1961, Inside Llewyn Davis is just that slice-of-life, ambling portrait of an artist set in a time when artists were weirdly considered both serious and un-serious members of society. Llewyn Davis (Oscar Isaac) himself embodies this duality. He seems objectively talented, but spends a good deal of the film trying to figure out whose couch he can crash on or which doctors can provide abortions to the girls he’s knocked up. He suffers for his art, but not willingly. And not intentionally. The movie starts with him being beaten up in an alley by some Southern dude for something that we only find out at the end of the film is completely dumb, avoidable and pretty childish. Not something a master of his craft would be subjected to.

Davis plays cafes and clubs around Greenwich Village in NYC. It’s the traditional folk music that was eventually popularized by dudes like Bob Dylan. Woody Guthrie and the like. To rich folks on the Upper West Side he’s a cool bohemian who they’re happy to show off to their friends as their “musician” friend. He gives them downtown cache. While they give him a sofa to sleep on when he’s out of options. We get to see, however, that his existence is anything but cool. He’s a wandering, deeply unsatisfied soul. He’s a dude on the subway with someone else’s cat in his lap. He’s a man sleeping with another man’s wife, who seemingly hates herself for doing it. He comes to the realization more than once that there is no mountain top. That living hand-to-mouth and subsisting on begging for gigs that he seemingly doesn’t even want to play is the only life he’ll ever live. He can’t have it all. In fact, he can’t really have anything.

The thing that really makes this movie sing (pun sort of intended) is The Coens’ look and feel and Oscar Issac’s acting. I don’t recall ever really seeing him prior to seeing this film. And he’s really amazing. Put aside the fact he actually performs the songs in the film, he just inhabits the character so fully that you forget you’re watching a dude perform from a script. Granted, the movie is very well-written and staged immaculately, but he just feels so incredibly natural as imaginary, disillusioned folk singer, Llewyn Davis, that I had a hard time believing he wasn’t this dude. I mean, the Coens are really good at putting sardonic, put-upon characters up on screen, but this one is pretty close to the top of the pile. He’s not weird like Barton Fink, or a nebbish like Larry Gopnick from A Serious Man (both awesome characters), but a much more “normal” dude. He could be that friend from college who used to charm girls with his guitar ballads who decided to “make a go of it.” And got a tiny, tiny taste of what passes for minimal success, but struggled and struggled. But he’s still that guy whose guitar got him chicks. And nobody thought he was serious, but you half-admire and half-loathe his stubbornness.

I know I’ve described next to nothing about the film, but it’s not an easy one to put into words. It’s a vibe. And even though there’s no real narrative per se (not unlike The Big Lebowski), the film bookends in a way that makes it feel whole. It’s a parable in a way. Though, honestly, the professionals do a much better job of explaining what the film is actually “about.” Whereas I just enjoyed watching it, guessing and soaking in the richness it has to offer.