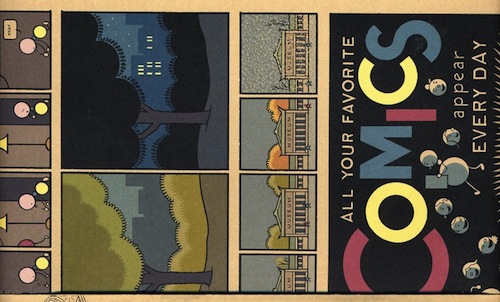 So, much to Mrs. Hipster’s chagrin, I decided to subscribe to McSweeney’s literary journal. She thinks all that crap is overly-high-minded, elitist and snobbish. I completely agree, and ask her if she’s ever read my damn site. Just to compound her scorn, I had to send several stern (yet self deprecating, snarky and intellectually worded) emails to their subscription department to get them to send me my first issue. After a couple promises, the thing showed up. I was immediately impressed with the quality of the book. The cover to this thing is a really cool comic folded up to create a perfect wrapper, with a couple mini-comics tucked into the nooks and crannies. The rest of the hard-bound book is immaculately put together. Oh, did I mention this issue is all comics? Yeah, this seems to be a recurring thing with me over the last six months or so. Never having read a graphic novel or comics growing up, the whole world of illustrated story-telling has really escaped me. No matter what efforts have been made of late to legitimize this art form as serious literature, I’m still resistant. Granted, Chris Ware (this issue’s guest editor) did certainly make an impression on me with his über-depressing graphic novel, Jimmy Corrigan: The Smartest Kid on Earth. Despite my fascination with that, my first foray into the world of speaking doodles, I can’t help but feel creepy and somewhat lame reading comics in front of other adults. Reading this compilation, though, I realize that most non-superhero comics out there these days are essentially illustrated blogs. I’d say ninety-percent of the comics in this issue are autobiographical in nature, with one hundred-percent of that ninety-percent complaining about their loserish lives and horrible self-esteem and crushing anti-social phobias. There is very little in terms of story-lines in these things. It’s like reading a day in the life of that guy you see at the bar reading some ragged library book and drinking tea in his horn-rims and ratty cardigan. Sounds kind of hipster-ish, but is really just dorky (like any girl who blogs about her cats and her boyfriend that works at the photo lab and always forgets her birthday). I honestly got pretty bored with a lot of this stuff, and prayed for somebody to shoot a web out of his fist or something. I guess I still haven’t been converted to the dork side. But I can’t wait for issue fourteen of McSweeney’s, which will hopefully be lighter on the graphics and heavier on the snobby literature.