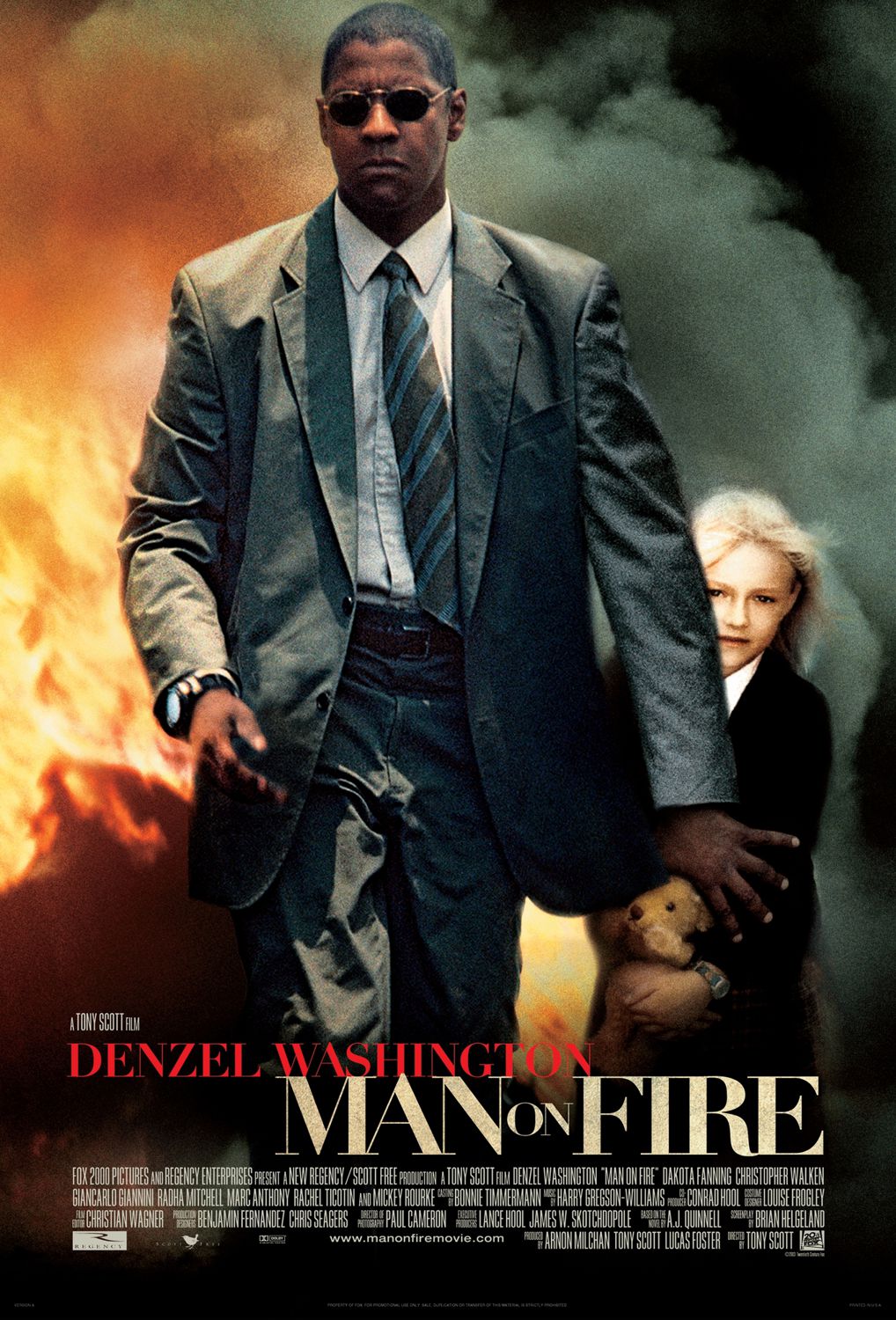 Sometimes I’m actually willing to give a movie a break. Sometimes there’s that certain something that strikes a nerve in me that makes me ignore plot holes, bad dialogue, plausibility, etc. Such is the case with Man on Fire. The moodiness and visual craziness of the film is so overwhelming and cool that I’m not even sure I heard any of the dialogue. Every scene is just packed with so much to look at that I may have to see this a second time just to pay attention to the plot. The Mexico City setting, with its folk art, iron work and architecture ads an artistry to the film–a backdrop that is more like an old painting than a modern day cityscape.

The director, Tony Scott, ads his trademark flash-cutting, slow motion, super-saturation and close-ups that also ad to the kind of surreal feeling of the whole thing. Denzel is his usually cool self. And, unlike his overrated performance in Training Day, he manages to not overact in a role that could have certainly sunk to that level. After all, playing a washed up drunk former government assassin could certainly open itself to melodrama and yelling. No, this was more of the understated power that Denzel is so good at portraying. See Glory if you want to see the ultimate display–I dare you not to get a lump in your throat.

And, as much as I hate to admit it, that Dakota Fanning girl is quite a little actor. So many child actors are so poised and polished at such a young age that it just comes off being creepy. But Fanning manages to be so natural in her role. It’s not like watching a weird undersized adult act, but more like a young girl going about her business while a film crew follows her around. It is a little weird that she is supposed to be half Mexican, but I suppose being a chameleon isn’t in the acting, merely the casting and makeup department. And, yes, I know about genetics and recessive and dominant genes, but does she really look like she could in any way be related to the singer Marc Anthony, who plays her father in the movie (and is, in fact, of Puerto Rican descent, and not Mexican)?

That little whatever aside, Marc Anthony actually isn’t horrible in the movie. With Jennifer Lopez’s career choices of late, maybe he’ll be the movie breadwinner in the family and not J Lo. After all, there are all those juicy roles out there for Latin men, right? I mean, there’s… uh, okay maybe not, but Jimmy Smits was hot for like a couple years there, and I hear Cheech and Paul Rodriguez are on the comeback trail.

Oh, so there is lots of gunplay in this movie–as there is in most vengeance films, which is basically what this thing is. Well, vengeance and redemption. Basically Creasy (Denzel) is a former US government assassin (as I’ve already mentioned) who has a little trouble with the booze (as I also tipped you to), and he has either been fired from his job, or leaves it, and comes down to Mexico on the advice of one of his old co-workers to work as a bodyguard. Apparently the big thing to do in Mexico City to make extra cash is to kidnap rich people’s kids and hold them for ransom.

Samuel (Anthony) and Lisa (Radha Mitchell) are just such a couple. Only thing is, they are a little down on their luck in the cash department, but of course the bad guys out there don’t know that. Regardless, they need to get a bodyguard for their daughter, and the only person they can afford is an out of work drunk ex-military assassin. A fact that Creasy readily owns up to. He almost doesn’t want them to get their hopes up. It turns out that he is not only a drunk, but also an anti-social, suicidal drunk. Just the kind of guy you want to guard your child.

So the inevitable happens, and Pita (yes, as in the bread) gets her ass kidnapped, and Creasy must go on an all-out crazy adventure to get her back. Of course in the interim between Creasy getting hired and her getting kidnapped, she had broken through his tough shell, and they had become good friends. That’s always the kiss of death.

So Creasy does everything in his power to get Pita back–both for her and for himself–vengeance and redemption. There is a lot of shooting, torture, explosions and general tough guy stuff that goes on, and all of it with the utmost in cool direction and cinematography. There are also some plot twists along the way, and Denzel gets himself real fucked up, but in the end we are satisfied with this man’s life.

I just kinda wish they didn’t use the weird painting for the movie poster. Photoshop isn’t that expensive in the scheme of things, and they really should and could have done the one sheet using a photo of the two stars with the flames and stuff just layered into the background. I wouldn’t be surprised if some folks stayed away from this film because of the bad painting job of Dakota Fanning alone.