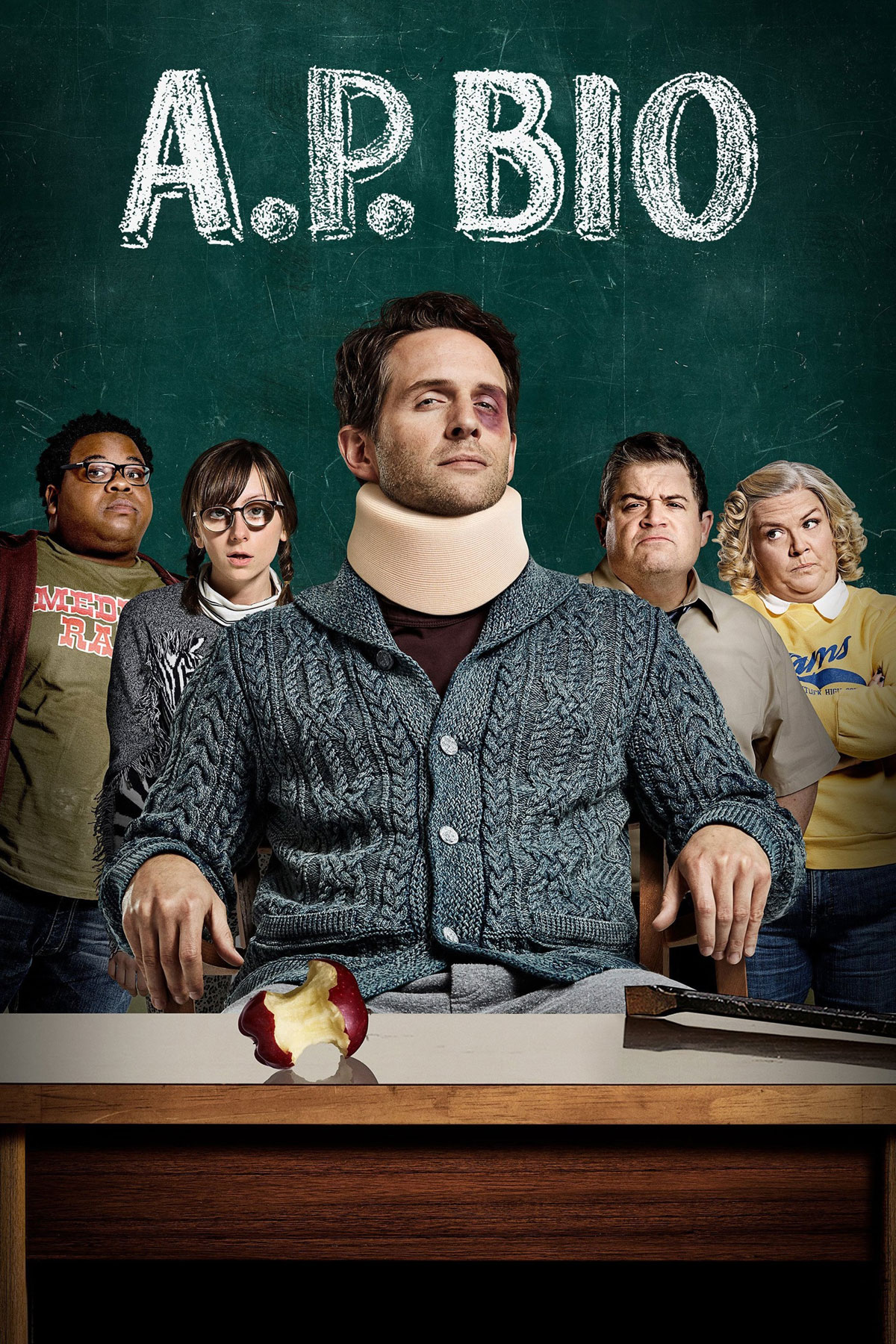 Things are getting desperate. In the time of COVID I’m reaching for canceled NBC sitcoms like A.P. Bio so I don’t have to watch another series about child murder, rape or bad white men doing bad things. Thing is, it turns out A.P. Bio is kind of about bad white men doing bad things. Or, rather, one bad white man doing specific bad things in the presence of school children. And, look, if you liked the Jeff Winger (Joel McHale) character from Community, you will love Glenn Howerton’s protagonist, Jack Griffin.

Yes, I know sitcoms are formulaic. That’s why the word ‘situation’ is right there in the name. The show’s creators set up a situation and each week the characters surround that situation. And all plots run through it. In this case you have a disgraced Harvard professor, Jack Griffin, who is forced to return to his childhood home in Toledo, Ohio to teach high school. Just like disgraced lawyer, Jeff Winger, was forced to go back to community college to finish off college credits he lied about getting. They both think they’re above the situation. And constantly remind everyone around them how much better they think they are.

So, there’s the “situation.” A snobby intellectual is put into a situation in which he thinks he’s too good for everything. The people, the job, the town. And hilarity ensues. Because, as we know is the case, he is in fact the damaged, infantile shitheel. He’s the jerk, not the people who surround him. And therein we know he’s going to be the one taught lessons, not the ones he feels he can enlighten with his worldliness.

The question now is, what’s the weekly plot that runs through it? Well, put into a classroom of smart kids who he refuses to teach biology, Jack realizes that he can use their smarts to plan petty revenge on his rivals. His old co-workers, boyfriends of old girlfriends, college deans, people who delivered him cold pizzas and on and on. The weekly plot generally involves him walking into the classroom, haphazardly throwing his apple toward the garbage can, telling the students to shut up and then drawing a crazy plan on the chalkboard of how they’re going to get someone fired, get him laid or unwind something stupid he’s done. It’s a decent conceit.

Let’s get this straight, though. Jack isn’t supposed to be a sympathetic character. He’s an asshole. He’s snobby and dismissive and hurtful. He’s screwing over a group of overachieving kids by not teaching them and essentially blackmailing them into doing his bidding. But — and this is the trick — the show’s writers have to soften him over time without having him do something that’s completely out of character. They can’t have this completely damaged man all of a sudden grow a heart. He has to remain selfish, but somehow work his way into being more human. Which brings us the the principle character, Ralph Durbin (Patton Oswalt).

Ralph is the sad sack, but eternally optimistic/clueless character who is a wet blanket, but truly selfless person who is the light to Jack’s darkness. Again, so very typical of a sitcom, but Oswalt brings that type of character to another level. His physicality and his demeanor and everything about his person is sympathetic and knowable. He is the perfect actor for the role. His interactions with his assistant, Helen (Paula Pell), are hysterical — especially in Season One. His straight-man thing and her serious Chris Farley energy make for some really fun stuff. I don’t know where Pell has been all my life, but she is off-the-charts amazing. Granted, it’s pretty clear someone watched Ferris Bueller about a million times and was like “We need our version of Edie McClurg’s Grace character!”

So we know that Jack is obnoxious and relatively horrible from episode to episode. How do we break up that overwhelming presence? By giving you a classroom full of kids with different personalities that can also be spun into comedy gold. We know they all have to be nerdy, so we have to take those nerd stereotypes and play up all the subcategories. The know-it-all. The weirdo. The psycho. The gay kid. The my-mom-says-I’m-awesome kid. The overachieving, Tracey Flick-type who is constantly trying to undermine the teacher who is actively trying to keep his students from learning. Because she wants to go to Harvard — where he went. A few kids rotate out after Season One (including one of the best ones: red-headed, no-necked, sax-playing Tucker Albrizzi), but they manage to keep a group of kids that are generally funny and engaging. I do think they sneak a few in here and there who were clearly not in the class to begin with, but it’s television. Whatya gonna do?

As far as sitcoms go, this one was pretty darn watchable. The first season is probably a bit better than the second, but it maintains mostly throughout. It could have gone sappy with things, but it does so relatively subtly and still has a little bit of an edge with Howerton’s performance. It made for a really good binge, honestly. It had just enough continuity between episodes to keep you engaged, but also enough episode-by-episode plot so that you can multitask and not miss too much. Apparently, despite being canceled by NBC after season two, they are going to bring it back as a Peacock original for a third season. I’m not sure what that means for the “kids” on the show (most of whom are probably in their twenties anyway), but I, for one, am excited to spend another semester (or whatever) with this group of actors and their zany antics at Whitlock High.