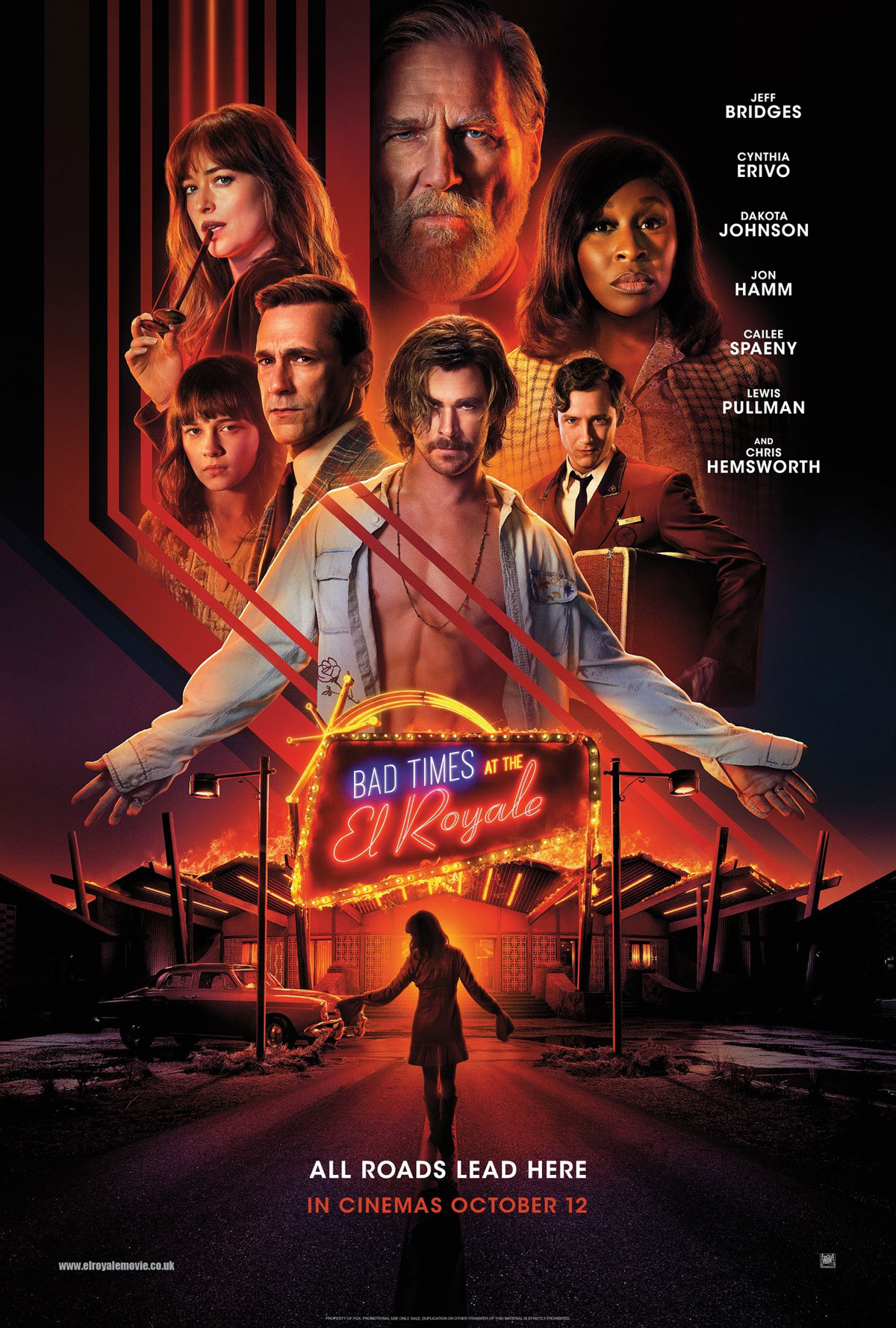 Bad Times at the El Royale

There is a weird, rambling quality to Bad Times at the El Royale. As if the title and the 140-minute runtime weren’t enough of a clue, its feels like in a perfect world this would be a six-part limited series. Otherwise, you have an intriguing crime film that definitely is feeling its Tarantino feels, but meanders in a way that yearns for some tightening up.

The set up of this movie should feel incredibly familiar to anyone who has ever watched a Hitchcock film or basically any ensemble cast movie where you stick a bunch of disparate folks in a place together by chance or by design. You lock in some people, some genuine and some pretending to be something they aren’t, in a singular location and let wackiness ensue. It’s Clue. It’s Murder on the Orient Express. Quite frankly, it’s Reservoir Dogs. It’s any number of stage plays. Interesting because this movie starts with a long scene on what looks remarkably like a stage (clearly on purpose) of Nick Offerman pulling up a bunch of floorboards in a hotel room and burying a bag underneath it. It’s a framing mechanism that sets up this locked-in drama (to coin a phrase) of this group of strangers interacting in the somewhat spooky, abandoned confines of the El Royale hotel.

The narrative definitely takes its time to get anywhere. The entire beginning scene takes what feels like an hour and feels, again, very much like a stage play as several characters exchange pleasantries, philosophies and establish some clear energy that nothing is as it seems. Super Tarantino, a la Hateful Eight. Once we get all the characters together, they then all go off to do whatever it is they came to the El Royale to do, which in most cases is not what they claimed when together in the lobby. And each, in turn, gets his or her backstory preceded by a title card. This is where the movie would have been better off as a television show. Or done more skillfully.

The things they are doing in their rooms expose the reason for them being in this weirdo hotel near Reno that literally straddles the California and Nevada state line. My initial thought is that they were all there to find that mysterious bag buried in the floor. And I think that would have honestly made for a better, more concise movie. If their backstories all connected to that bag somehow — instead of just one of them — and the rest of the folks just landing there by coincidence, or for reasons above and separate from recovering that satchel. Mostly they’re just there by coincidence. Which seems, well, too coincidental. They all show up to check in exactly at the same time and happen to be the only guests in this hotel that clearly hasn’t had any guests in some time? Hmmm.

Anyhow, things get crazy and spiral and then this whole other group of folks show up and that kind of removes the insular spookiness of the thing and, ultimately, seems kind of odd and vaguely out of character with the rest of the film. In fact, the cultish Chris Hemsworth character and that whole side story feels like it didn’t need to be in there at all. Especially when we have this shadowy “management” that could have been a cool direction, but turns out to be more of a red herring (or a lost narrative path) than anything else. It would have been just fine if Hemsworth and company just stayed the hell out of it. His character as a whole make no sense to me.

This is all to say that this was a super-ambitious attempt. And if someone got ahold of the script and chopped away some of the fat and kept the story between our main group, this could have the makings of a cult classic. Or if they’d pitched it as a multiple episode series. But they got a little convoluted with the plotting and weakened the core by committing to too many tendrils — including the big bad, whose back story belies where his character ends up. They tried to set it up like that horrible Negan character from The Walking Dead, but it just didn’t work with the rest of the movie’s noir flavor. I finally realized what all the fuss is about Cynthia Erivo is, though. She’s pretty damn amazing.