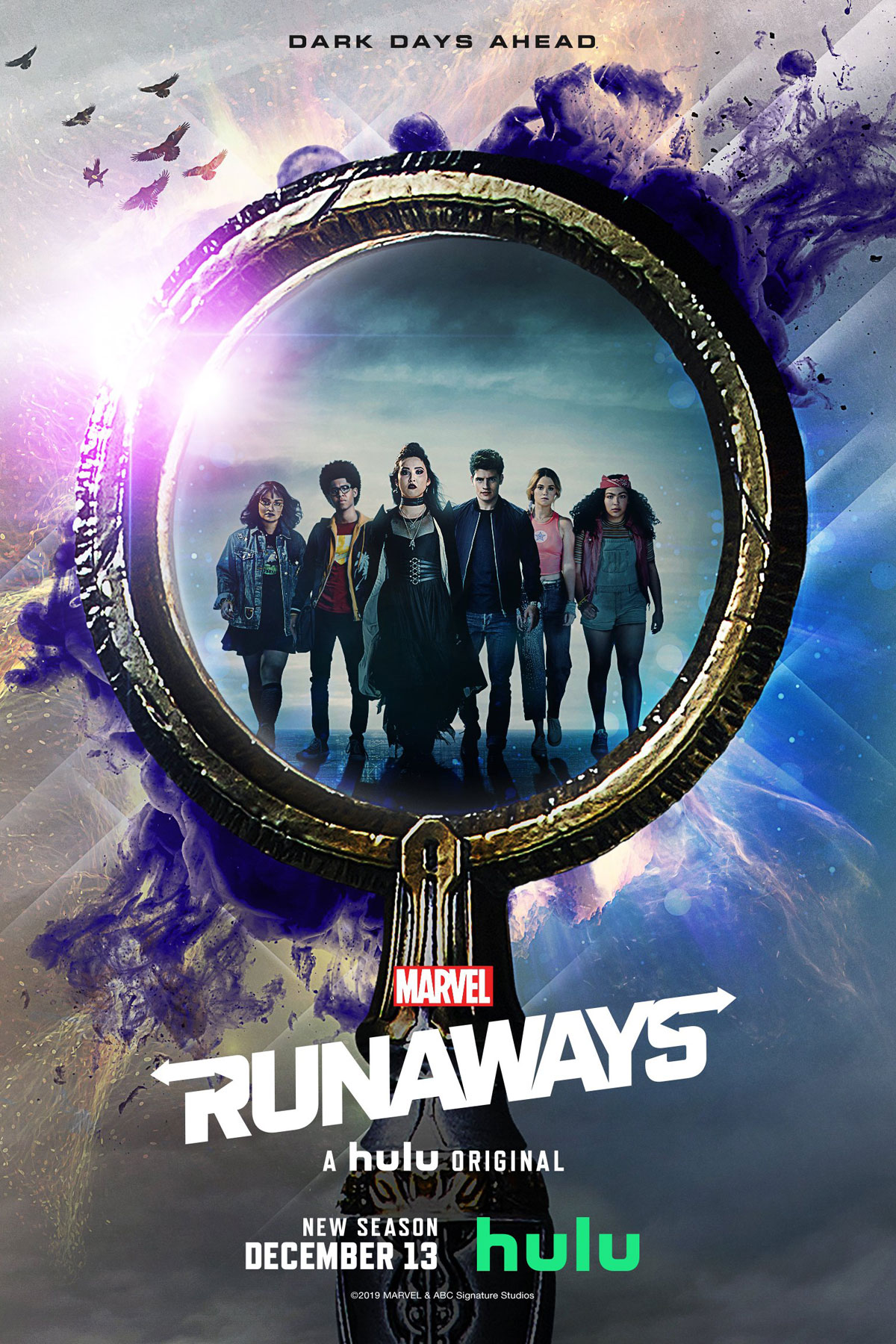 This show, Marvel’s Runaways, was not built for a man my age. That should be evident from the poster. And the name. And the fact it’s a Marvel show. Even though there are weird adults who are really into this stuff. You know, teenagers with powers and whatnot.

But, no, I didn’t pick this up by myself. Hipster Jr. Jr., who is herself a little bit of a Marvel connoisseur agreed to watch it when I scrolled by it one day. I honestly didn’t expect her to be into it or stick with it, but she did. Which at first was fine. But then I realized I had committed myself to three seasons and 33 hour-long episodes. And, let me tell you, it was a bit of a slog.

The plot here is pretty basic. Hell, it’s right there in the title. A group of high school teens, who have known each other since they were little kids through their parents, are like The Breakfast Club of some fancy LA private school. They’re a bunch of privileged kids who have grown apart, each one basically taking on a character from that seminal teen movie. Their parents continue to meet as part of this ostensibly charitable organization called Pride. Completely glossing over the fact that “Pride” sounds like a gay awareness organization, Pride is clearly up to something more than charity.

Meanwhile, these old chums find each other again, figure out their parents are evil and… they run away! Well, they run like five miles from home. But I suppose this group of almost-adults living in the Hollywood Hills constitutes running away. And, in running away, they realize they all have special Marvel-like powers. Or do they?

One kid can control a dinosaur that her parents created in a lab. Another has super strength. Another is a Wiccan and can control a magical staff that’s pretty cool. One girl is made of light or something and can shoot beams and float. Another guy has these laser-shooting gloves. And the last guy is, uh, good with computers. Some of the powers are alien-based. Some are of unknown (and unexplained) origin, one is from some sort of glowing rock infection and then the last two have absolutely no discernible powers at all. It’s a little weird.

So, the whole series is basically the group of teens running away from their parents, who are trying to get them back. While also being murderous weirdos all in service of some alien dude who has something to do with a Scientology-like church. There’s lots of teen drama as some of them date each other and break up and accuse each other of betraying the group. Over and over again.

It’s clear to me that they didn’t really plan out past season one and a half. The aforementioned dinosaur pretty much vanishes. Which I attribute to a lowered CGI budget and/or lack of workable plot. But without her dinosaur, that main character’s powers are basically what seems to be a case of on-and-off anxiety and myopia. The guy with the laser gloves? They work about 20% of the time and don’t seem to do anything much. So he’s like a decent high school lacrosse player. And the guy with the computers is pretty much only useful when he has his 2002 laptop thing that seems to be able to do a lot of stuff it could never actually do. But he’s basically a really decent IT guy.

On the other side are the asshole parents, the evil alien dude and that’s about it. The kids want to murder them. And then not murder them. And then be their pals and then not. It’s confusing. And then Morgan LeFay (Elizabeth Hurley) comes along and it turns into this weird interdimensional witch thing. Again, it seems like a plan that just came along and had nothing to do with the main narrative of the show. But it takes over. Because, again, nobody is particularly interesting. The situation is convoluted with the whole alien plot and things just end up going in circles.

That all said, I’ve seen worse acting from young casts. All the players are pretty decent, with a couple exceptions. The writing is kind of mid-level CW Network type stuff (or what I imagine it’s like) and it’s really targeted at teens and young adults. They do some light swearing and stuff and there is some sex stuff, but it peaks at a PG-13. There are also some weird scenes of adults attacking teenagers, which I suppose could be disturbing. But most disturbing is the fact this thing got a three-season run when it ran out of steam after one. The good thing is, it’s done now and nobody can make me watch it again. Unless she asks nicely.
https://www.youtube.com/watch?v=X11RrTLA-E8