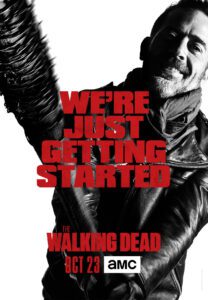 As if watching this Negan shithead the whole season wasn’t bad enough, now we have the confusion of which stupid walled-off town each one of the characters lives in / belongs to. And are they all within walking distance? I mean, dudes, just move to another state for fucks sake. But, seriously, Negan. That actor is the worst. The worst. His head bobs and his other ticks are enough to make an already repetitive-ass show feel like Groundhog Day-level torture. Every time he comes on screen, I want to throw something at my TV. And not because he’s just so damn evil, but because he’s so damn annoying. And, honestly, so is the whole damn show.

How many ways can you kill a zombie? The answer is: an infinite amount of ways. You can stab them and shoot them and run their heads over with cars and you can burn them and drop them from heights. Or you can somehow have a whole pile of them come out of unexpected places or drop from the sky or hang around carnivals. But, rest assured, whatever clever way you have to get around them will either collapse or disintegrate or somehow structurally fail right at the wrong time so you find yourself unexpectedly surrounded by a bunch of extras in dead-eye contact lenses and latex. And the writers of the show will have you do something disgusting to them. But they’re kind of running out of methods, so they’re getting more and more absurd and sometimes it feels kind you can just feel the writer’s room white-boarding new ideas and just kind of going, “Yeah, why the fuck not?”

Did we mention that the budget (or some need to keep production in the Atlanta area) limits the sets from season to season? So much so that characters can be stuck on the same farm or the same prison or the same town square for entire years at a time? And that the generic woods that surround these areas are probably re-used from show to show for seasons on end? So much so that fans have just given up that the characters will ever think to maybe movie somewhere where the undead can’t sneak up on them through thick trees. It’s tiresome and at times it feels like the showrunners are playing us for fools.

Oh, and we also get less and less professionalism behind the camera — never as evident as this season. I think the make-up assistant directed a couple episodes this year. There were some shots that were so awful that Ms. Hipster and I actually laughed out loud. Instead of taking a second take when characters accidentally have their heads cut off by a shot, the shots don’t align and/or things are framed so amateurishly that even a 12-year-old with a bad YouTube channel knows the shots look like shit, they seem to have done the classic “we’ll fix it in post.” Thing is, they don’t fix it in post and those terrible shots make it to the final product and it feels, at times, like we’re being punked. If I actually paid to watch the show, I’d demand my money back until they applied some quality control on the production process.

And Rick’s accent. I mean, c’mon man. Nobody’s fooled you’re not British, but let’s try to keep something consistent. One minute you’re a relatively generic American and the next you’re Hopalong Cassidy from god-knows-where made-up Southern state. And let’s wash Darryl’s hair. Or cut it or something. And don’t get me started on Carl’s hair. Luckily he disappeared for the second half of the season (probably busy studying for his freshman exams or something) but his hairdo was somehow more distracting than his super-fake missing eye socket. Cut that shit, man, you’re using up all the post-apocalyptic conditioner! I was also thinking about contact lenses. Yeah, contact lenses. Think about all the people you know. Now think about how many of them either wear glasses or contacts. Now, how many people on The Walking Dead wear glasses? Pretty much zero. That means that in order for them to see, they’d need to be wearing contacts. But you know they’re not. I mean, the actors are, but I’m pretty damn sure there are no non-expired lenses floating around. So are characters just walking around blind, or have all the near-sighted humans gone the way of the dodo? A kind of natural selection of people with properly-shaped corneas?

My obsession with stupid details aside, this show — while never terribly dynamic to begin with — has just become a slow-moving slide into the swirling morass. They figured for season seven they’d come up with yet another cartoonish, super-sized bad guy who is remarkably similar to all the other cartoonish baddies — but more annoying. And rather than kill him off in some giant battle at the end of the season as we would expect, we are left with what we know will be a season eight filled with him and his stupid bat. Unless, of course, The Walking Dead throws us one of their famous curveballs after a season full of head-fakes, and offs the dude in episode one of season eight. Either way, with each passing season (or half-season, or whatever silliness they tease us with every year) it gets harder and harder to want to tune in to watch our characters tromp through the same forest, kill the same zombies and essentially walk in the same sucky circles with no forward motion of any kind. I’m amazed that this show still has an audience, as watching it has become the television equivalent of staring at a fish tank in the doctor’s office: you’re in a place you don’t want to be, but it’s easier to watch the fish aimlessly circle than blankly stare at a wall and obsess over in the inevitable.

I’m not one to get excited about this thing coming back on the air, what with its weirdo half-season schedules and plotlines that all seem to blend into one another, but I’m sure my DVR will alert me to the AMC hype machine when I get the oddball “first-look” episodes and “making of” and whatever the hell else they want to throw at the adoring public to push yet another eight or so hours of relatively humorless and boring gore and sorrow. Or perhaps for season eight they’ll pull a Scrubs, Community or even True Blood and do the “wacky” version of the show and really throw us a bone and get us out of the endless cycle of suck this show has become.