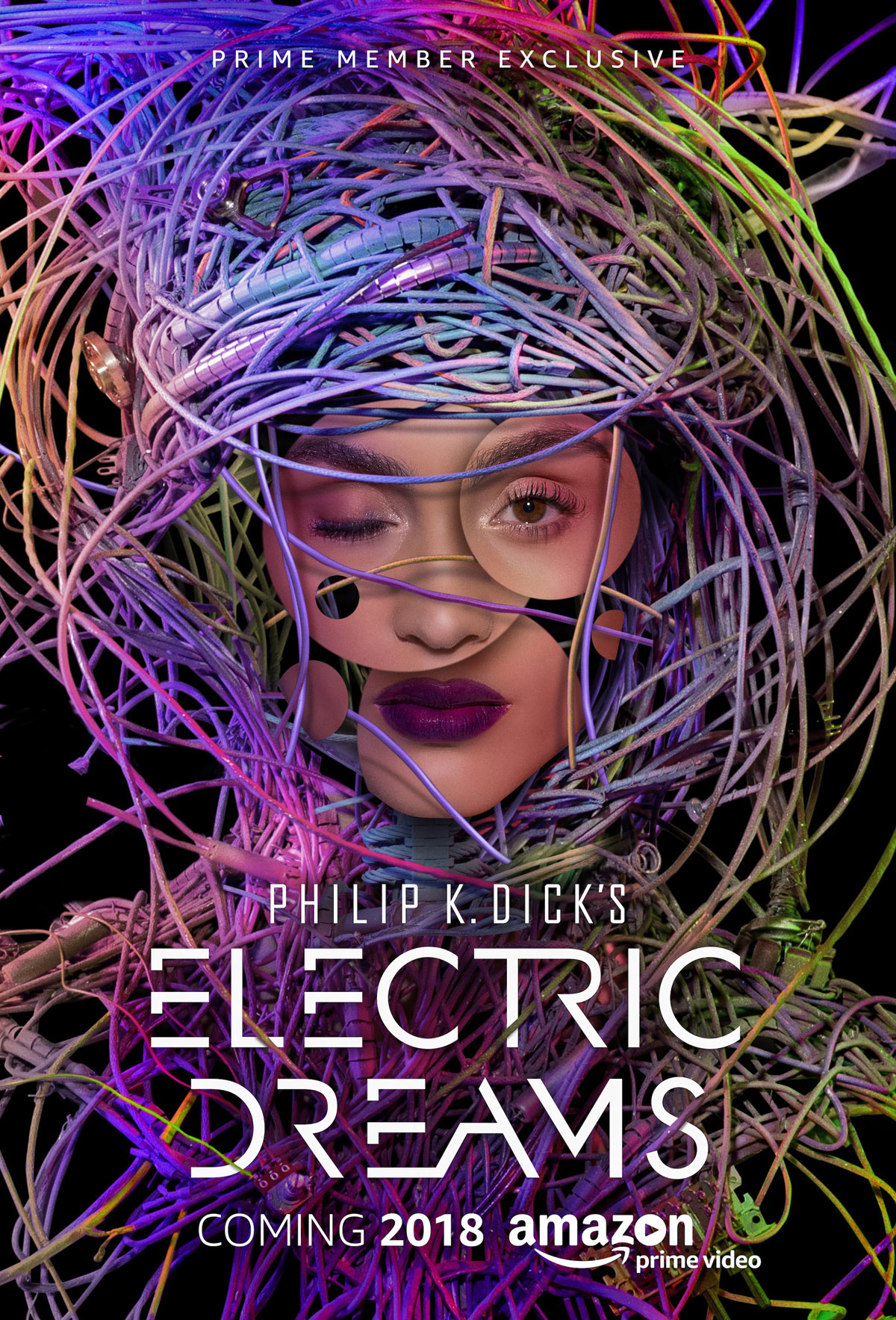 I gotta say that I was super-psyched when I heard there was going to be a Philip K. Dick anthology series. I’m a kid who grew up watching The Twilight Zone and watched both the original Alfred Hitchcock Presents and the updated series that ran for like four years in the late 80s. I just love a well-told story that involves a devious twist that turns all of your thoughts and expectations on their head. So Philip K. Dick was an obvious next step in my evolution, as I watched great movie adaptations of his books in Blade Runner, Total Recall and Minority Report and not so great adaptations in movies like Next and The Adjustment Bureau. And read his books like Ubik, A Scanner Darkly and The Man In the High Castle — the second two of which were turned into a movie and an Amazon television series respectively. So, I guess that makes me a bit of a Dickhead?

It seemed to me, after hearing this exciting announcement, that Amazon wanted its own version of Netflix’s Black Mirror. After all, there was buzz and cache around that show since its early UK days, when it showed on the same UK network, Channel 4, that this series also premiered on. Black Mirror is a super-disturbing series about technology and its dystopic effect on human beings. Or at least that’s kind of the overarching theme that wends its way through all of the episodes. Electric Dreams looks to follow suit if you are to just look at the poster and watch the opening credits of the show, which are really pretty terrible and intentionally weird in a way that comes off as oddly anachronistic and cheap, though not on purpose. But what we are really in store for is a series of episodes with little to no continuity of look, feel, theme or quality. They are all supposedly loosely based on Dick’s short stories, but I believe some of them are seriously changed and/or bear little resemblance to the source material expect in very superficial ways. I just felt right out of the gate that something was wrong with the show. I still can’t quite place it. Maybe it was budget limitations, maybe it was the inconsistency that I mentioned, or perhaps it was just missing that usual Dick magic that I expected.

I wanted the twists and the turns. I wanted the mind-fuckery. I wanted the trippyness that sometimes attends his stuff (the guy loved drugs). But I also wanted the darkness. Dick was a dark dude. And his tales were often pitch black. They were often bleak and ended like many of those classic Twilight Zones and Alfred Hitchcock episodes, where the presumed hero or the protagonist in which we’ve invested is left helpless or hopeless. The twist put them in a deep, dark hole. Black Mirror gets it. But this series just doesn’t. It almost can’t help itself, flinching when it shouldn’t, turning away when it should turn into things and sparing us the misery that we deserve.

Here’s a quick recap of the episodes.

Real Life
This is one of those twisty-turny reality ones. It’s sci-fi where a woman puts something on the side of her head (Black Mirror loves these things) that allows her to take a “vacation” from her traumatic, real life and live in an alternate reality that is way more awesome. We go back and forth between the two realities, and through some intentional confusion become unsure which reality is the real one. The concept is actually pretty great, and the acting is waaaay over-the-top because of course it is when it involves Anna Paquin and Terrence Howard are involved. Thing is, the concept is good, but the execution is flawed. They get to the emotional layer, but then bury it in confusion and trickery. At least this kind of felt like a Dick story, but the end result was disappointing and muddled.

Autofac
Ironically (or maybe not?) this seems to be a story about Amazon taking over the world. In the apocalyptic world, we focus on this town in which a factory belches out smoke so it can deliver a bunch of packages via drone to a bunch of rag-tag folks who didn’t even order the shit that’s being sent to them. It’s kind of like The Terminator where machines have taken over the world and all they want to do is send people sneakers. This one is kind of a mess as well, as the whole concept is just kind of stupid. But it does make you wonder of Bezos feels guilty about destroying the world.

Human Is
Look, I loved Breaking Bad. Heck, I even liked Malcolm in the Middle. But ever since watching Bryan Cranston in Sneaky Pete, he annoys the crap out of me. His acting is weirdly stiff and, honestly, kind of trash. Perhaps he’s really just not very good at playing a bad guy, which is basically what he plays here as a future military guy who is abusive to his wife and just basically a misogynistic dick. The plot is really quite simple, as he goes away to fight some alien race and comes back a changed dude. Did his brush with death at the hands of aliens really chill him out and make him realize that his wife is an important thing in his life, or is something else afoot? You already know the answer to that, and, unfortunately, so did I about two seconds after he returned.

Crazy Diamond
Now, this feels right. It’s a really trippy and weird and twisty noir tale that involves a schlub and a femme fatale and a heist plot that makes as much sense as a Coen Brothers’ movie. It’s not often you find loose sci-fi, so it’s kind of a joy. Steve Buscemi was born to play these down-on-his-luck characters, and he doesn’t disappoint. While this one definitely felt different than the rest of the series, I’m thinking that if they do a second season, they should definitely use this one as a template to infuse some humor and really just embrace the strangeness that embodies the series’ namesake.

The Hood Maker
It feels like perhaps this was the one they wanted as the show’s centerpiece. Another pseudo-noir set in the future where telepaths are running around the always-rainy streets, reading people’s minds, but mostly being prostitutes, where, because of their powers, they can project experiences into people’s minds without actually touching them (think sexless sex). One particularly attractive telepath partners with the hard-boiled cop to track down the hood maker, who has created these creepy masks that block the telepaths’ ability to read the wearer’s mind. I’m honestly still uncertain why this enterprising dude is a problem, but the telepath and the cop really want to get him. This is clearly a story about the surveillance state and looks nice at times, but is a little bit clunky as it roils toward its conclusion.

Safe and Sound
They really bungled this one. Each episode seemingly attempts to make bigger points about society — this one more than any other. I think (think) it’s about terrorism and why the feeling of “otherness” emboldens or creates terrorists? I’m honestly not sure what the hell is going on, as we watch Maura Tierney be the cranky, hippy political mom from one of future-America’s “bubble” communities in the middle of the country, as she moves her and her daughter to one of the modern communities on the coast. The bubbles are maybe supposed to be innocent Middle America, or maybe they’re Arab states? And the modern city they move to, with its surrender to surveillance and privacy, is maybe the elitist coast or America to the bubbles’ not-America? I don’t really know, as they mix up the casting and the “bad” guys in a way that is unclear. Also, the twist is such a thud that they kind of have to go back and explain it in what almost amounts to an epilogue. Again, done better, this could have been interesting, but the whole thing is clumsy as hell.

The Father Thing
I think this was supposed to be an attempt at a Spielberg-like tale about parents being taken over by aliens and their kids’ attempts to fight back. Cute. But not at all, because we have to be tortured by this idea that fathers and sons sharing their love of baseball trivia is somehow a thing in 2018. The banter about stupid wins and losses is about as real as me chatting with Hipster Jr. Jr. about the intricacies of Fortnight. This one was a total throw-away, and it seems even the actors knew it. Try, try again, Mr. Kinnear.

Impossible Planet
This one is more in the classic mold and was a decent episode. The gist is that there are these two dudes who run a space tour in the future, as all humanity apparently lives in deep space somwhere. The tour itself is a bit of a slight of hand, as they play some visual tricks on their space tourists, but give them a show they won’t soon forget. So who is it hurting that they’re enhancing the experience with some trickery? They’re just trying to make a buck. But along comes this very old woman, who asks the pair to take her to Earth, where her grandmother once enjoyed skinny dipping in some lake in “Carolina” as a young girl (people seemingly live to be like 500 in the future). The two, after being offered a very large sum of money, take her on that journey, despite the fact they have no idea where Earth is — or if it even still exists. The story, ultimately, is a love story, though a pretty convoluted one. Whatever faults the plot has, the actors are great, the story memorable and the plot at least 75% solid. So, definitely in the top couple of the anthology.

The Commuter
I kinda liked this one too, despite it making close to no sense. It just didn’t try too hard and featured a normal, working guy and no sci-fi at all. It was in more in the Twilight Zone vein, as a sad man with a sad life discovers that he can escape that life via an unplanned train stop that leads to a magical, perfect town where all your troubles just fall away. I’m still not certain about the mechanics of this town and exactly how it works (despite some convoluted backstory), but there becomes this whole conundrum where the perfect life away from his imperfect family may not be as perfect as one would think.

Kill All Others
This one I really hated. You’d figure they’d stick one of the stronger ones last, but this was some sort of “message” one where the message was completely garbled. I still have no idea if it’s a statement about unions or is kind of about hate speech and authoritarianism. Honestly, I totally didn’t understand what the hell was going on. I mean, maybe a story about a candidate in a race where she is the only candidate (and is actually called “The Candidate”) and has a motto of “Kill All Others” is just too unsubtle. I thought it was going to be a good Dick paranoia piece when it started, but like some of the worst episodes in the series, it veers into politics and fails in ways I have trouble even explaining.