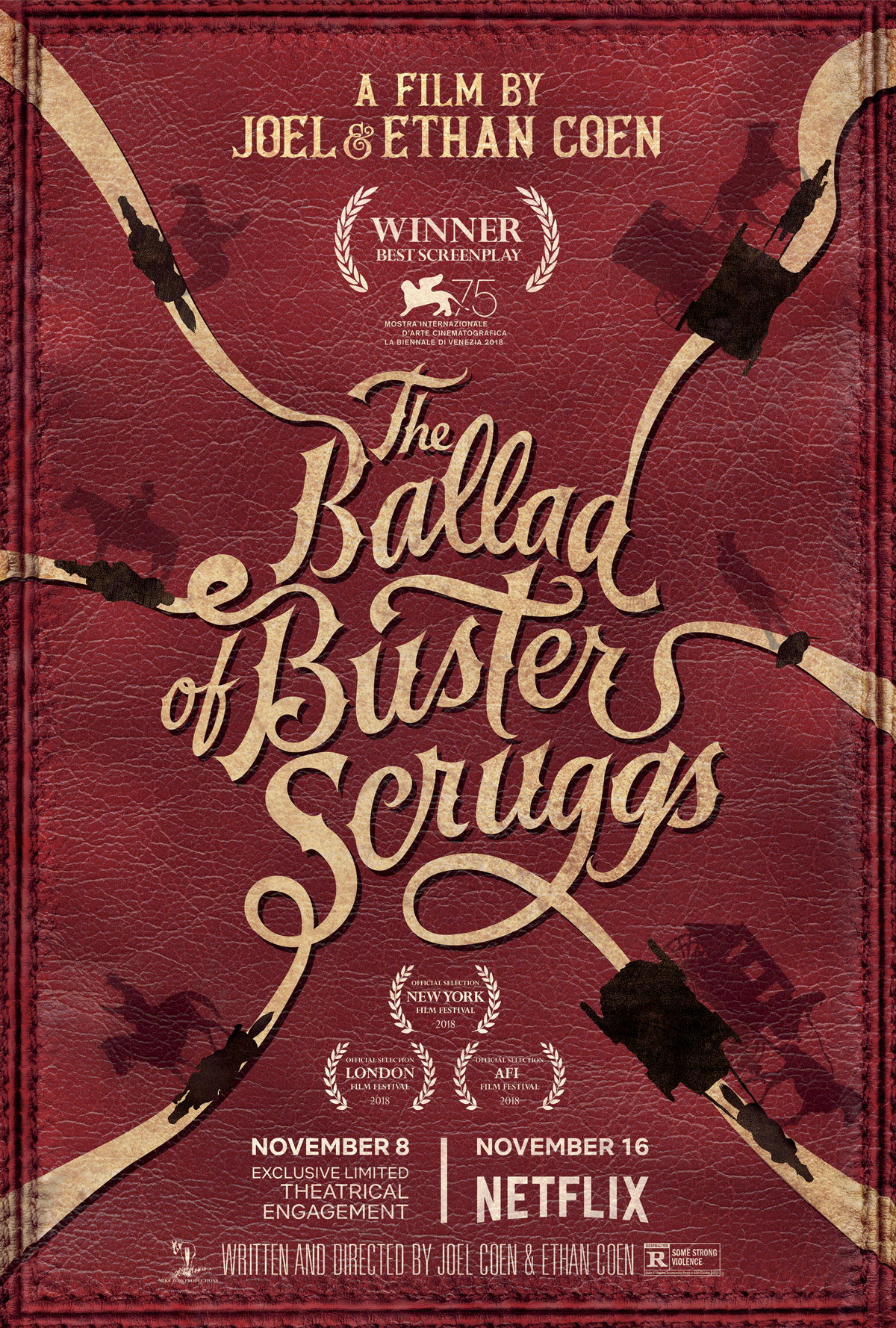 The Ballad of Buster Scruggs

This is ostensibly a Coen Brothers movie. But, honestly, I debated whether to stick it under the television or movies category. I mean, I think it was entered in some festivals and maybe played in a couple theaters in LA and NYC, but for all intents and purposes, it came out on Netflix and is available to stream like any of their other “original content.” The melding of our cultural mediums is complete!

The movie itself is made up of six tales of the western variety. Only the first in the series is actually called “The Ballad of Buster Scruggs,” however. And he, Buster, never makes an appearance after that first tale. Which, in and of itself is odd. Like you expect that Tim Blake Nelson, who plays the so-named Buster Scruggs, will somehow show up in the other five stories. Of course — and this is a spoiler alert for at least episode one — he dies. Though, after singing his way through a series of Coen Brothers wacky setups, which include some pretty violent, but almost slap-sticky stuff, he gets his head essentially shot off and then turns into an angel and floats away while singing another diddy, complete with wings and a lyre. It’s pretty cartoonish, but not at all outside of something like O Brother, Where Art Thou? in the Coen Brothers’ filmography.

Trying to find that through-line in any of these individual little filmettes is a tough one. I suppose they’re all filled with a kind of irony, which is something that the brothers like to explore. But I’m really wondering why they didn’t just make it a six-episode television series? I mean, the total running time is about two hours and fifteen minutes, so each episode could have been the average length of a half-hour network show (not including the commercials). I’m sure they’re loathe to do television, but these anthology movies are always a little wonky, as the themes, and even the feel from segment to segment, kind of takes you out of the flow. Or at least it did for me. Although I think each story had its strengths, but I just couldn’t hang with the anthology of it all.

You already heard about the first story. Here’s a quick take on each of the others:

Near Algodones
James Franco — who I swear was a pariah and was never supposed to work again — is a bank robber on the plains of somewhere in the middle of nowhere. Turns out he’s not a very good one and gets in a shoot out of sorts with Steven Root, who basically plays the Stephen Root character from Office Space (but with a gun). There are a couple quick twists and it ends in ironic fashion. It’s a pretty breezy one, kind of funny, but ultimately pretty disposable.

Meal Ticket
This one stars an almost unrecognizable Liam Neeson as one of those dudes who has a wagon that turns into a stage that he brings around from camp to camp with entertainment for the people. His entertainment happens to be an armless, legless dude who spouts classic literature and speeches from Lincoln and whatnot. It’s almost an entirely wordless script save the performance of the legless man. It’s a pretty disturbing, boarding-on-uncomfortable watch that spins into almost a Coen Brothers Twilight Zone episode with their own Coen Brothers twist. It’s a good one, though it really pushes you to the edge of your patience before you get to the pay off.

All Gold Canyon
This one stars a crazy-looking Tom Waits as a lone gold prospector digging holes looking for a gold vein on the banks of a beautiful river valley. Like Meal Ticket, the wind-up is really, really long and there is a whole lot of repetitive action and a wonder of what the hell it’s all about. Unlike Meal Ticket, it doesn’t really pay off in the end, but it’s certainly one of the only tales with a somewhat positive ending.

The Gal Who Got Rattled
Starring a couple of folks who look familiar, but aren’t the household names like the ones above, you have the very popular wagon train genre. Actually, I have no idea if that’s a thing, but there’s a wagon train and a dead husband and a budding romance between a woman and one of the dudes who leads the train. Though it’s a very chaste, conservative type of romance that involves a lot of ma’ams and pledges and those type of things. It’s one of the talkiest of the stories (save the last one) and is well formed and written. I’m always a little squeamish when it comes to native Americans versus cowboys or, in this case, pioneers, but I suppose it’s another genre thing, so I don’t have to be all crazy PC about it. So, when the Indians attack and things go sideways, the Coens use their typical cool, distant emotional cudgel to great effect and make one of the best of the tales that feels almost a little Raymond Carver-ish in its cruelty.

The Mortal Remains
This one takes place almost entirely inside a stagecoach, and is the most schticky of all the tales. You have what amounts to the Coens doing their best Tarantino Mexican standoff dialogue (sans the actual standoff) as the five characters volley insults and tales at each other in very close quarters, building and then releasing pressure with no real idea where it’s going to end up. It’s a fun little romp, but really only for the true dialogue heads.