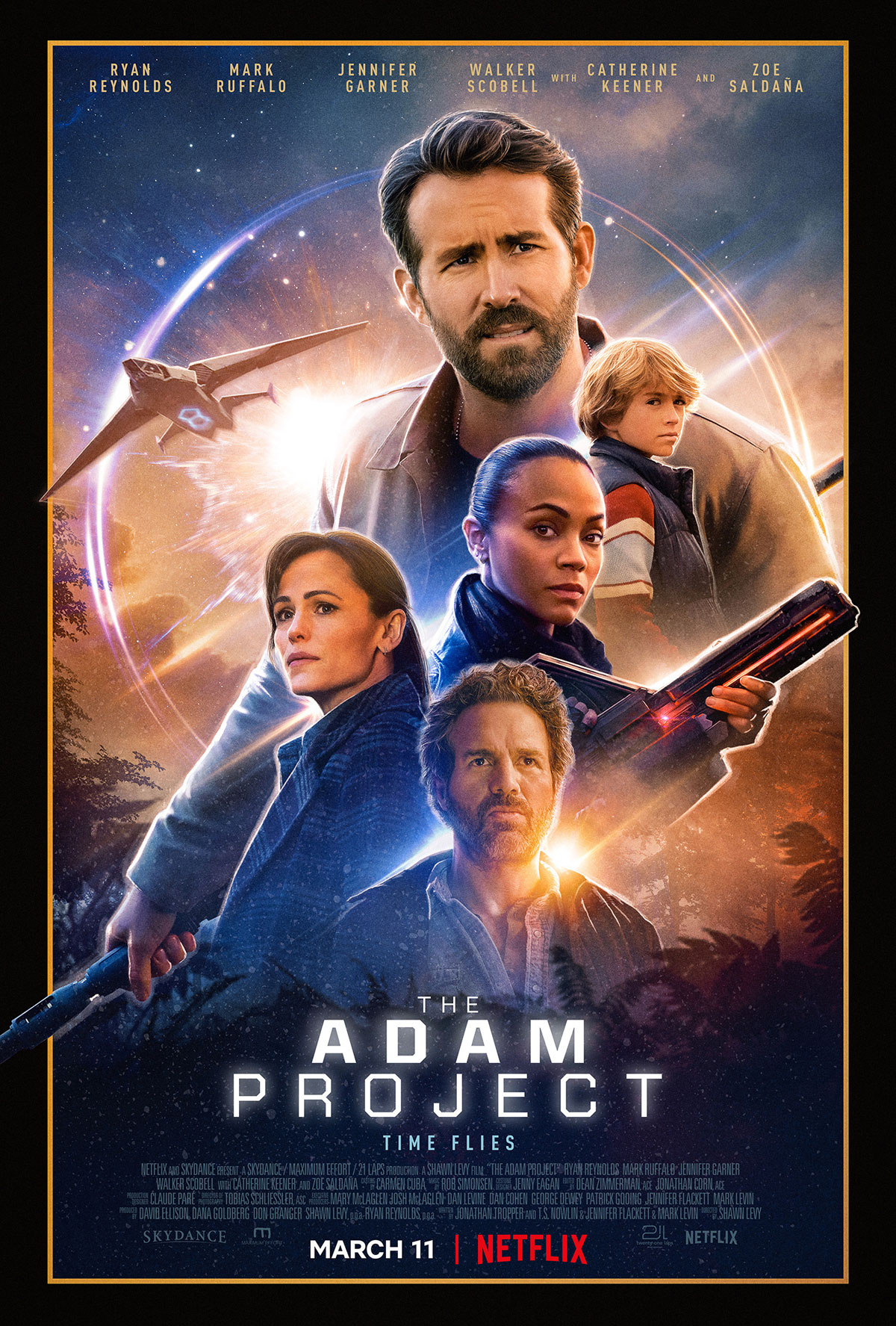 Apparently I only watch Ryan Reynolds movies now. Reynolds, who has in recent years become kind of mid-career Tom Cruise. Starring in some samey-samey sci-fi action films, and generally being a movie star who dates movie stars. And seemingly owns like a digital bank and a Welsh soccer team and whatever the hell else he does. I don’t believe he’s a Scientologist. Though he is Canadian. So that’s pretty much a draw. Point is, he seems to be the dude they plug into these ostensibly comedic action pictures that require some humor, some physicality and a plot that one can usually take or leave.

There is a reason that time-travel stuff is complicated. First, you have the rules of time travel. And each film seems to use the rules that work best for it. So it’s inconsistent. Second, there is inevitably a lot of hand waving and ignoring shit that has to happen. Especially in movies like The Adam Project. For instance, do you remember what you looked like when you were twelve? Do you really look that much different now than you did then? Like enough so that if your forty-year-old self came back from the future, stood in front of you and hung out for a while you wouldn’t recognize yourself? Like wouldn’t even have an inkling that you were looking at an older version of yourself? Seems like a stretch. As is the “time jet.” Which is like just a jet that travels through time, I think? That exists in 2050, which is like only 27 years from now. At which point the world is a dystopia… that has advanced jets that can just travel though time. It’s all a bunch of nonsense.

And, frankly, that word kind of sums up the film as a whole: nonsense. Someone somewhere was allowed to bolt together this script that clearly wanted to tell a father-and-son / mother-and-son tale, but needed to throw in the insanely convoluted time travel thing into it. Funny enough, the mother is played by Jennifer Garner, star of insta-aging film, 13 Going on 30. Which also stars — ta-da! — Mark Ruffalo. Who plays Ryan Reynolds’ father in this movie! And this is exactly the type of movie this thing used to be. This is basically the 2022 version of a body-switching / insta-aging film. But with so much yada-yadda fake science bullshit it’s incredibly mind-bending. And therein lies the issue.

Reynolds’ character, boringly named Adam Reed, goes back in time to save his also-time-traveling pilot wife, Laura (Zeo Saldana). (Side note: I’m actually happy to see that they hired an age-appropriate actress to play a woman who is actually supposed to be his age. So at least I don’t have that to complain about.) But he undershoots the time travel and lands in 2022 instead of 2018, where his wife has travelled. Instead Adam runs into his twelve-year-old self, which is great because he needs his DNA to run his space plane. With the assistance of alt-timeline, 2022 Laura they manage to get back to 2018, where Adam now gets to hang with his dead father, Louis (Ruffalo), who died in 2021. So now adult Adam and twelve-year-old Adam get to see the father they both know dies a year from then. A father who also happens to be the dude who came up with the algorithm that makes time travel possible. Man, this is getting crazy! And, honestly, the interactions with Ruffalo and Reynolds are just fine. And Jennifer Garner is a warm and decent actress. The kid is decent, too.

But all the stupid garbage with bad guy, Sorian (Catherine Keener), and her goons is just goofy and unnecessary. It’s the by-the-numbers greedy corporatist baddy that you once trusted as a partner narrative that you could just tack onto anything. And it’s never good. There’s like a boss battle that is asinine and pretty lazy. It’s a shame, really. They have a group of charismatic actors, and could have made a decent “family” film out of this thing by leaning into that side of things rather than feeling the audience needed to see explosions and stupid time travel stuff. And this is from a guy who generally likes time travel stuff. There is also something inherently cheap-feeling about the film. Yes, I know it was essentially made for Netflix, so I probably had an instant bias against it. But some of the battle scenes and whatnot gave me SyFy channel vibes. Or like some of the cheaper Disney+ shows. Also, this was clearly shot in Canada. Maybe Reynolds would only sign on if they filmed near his house?