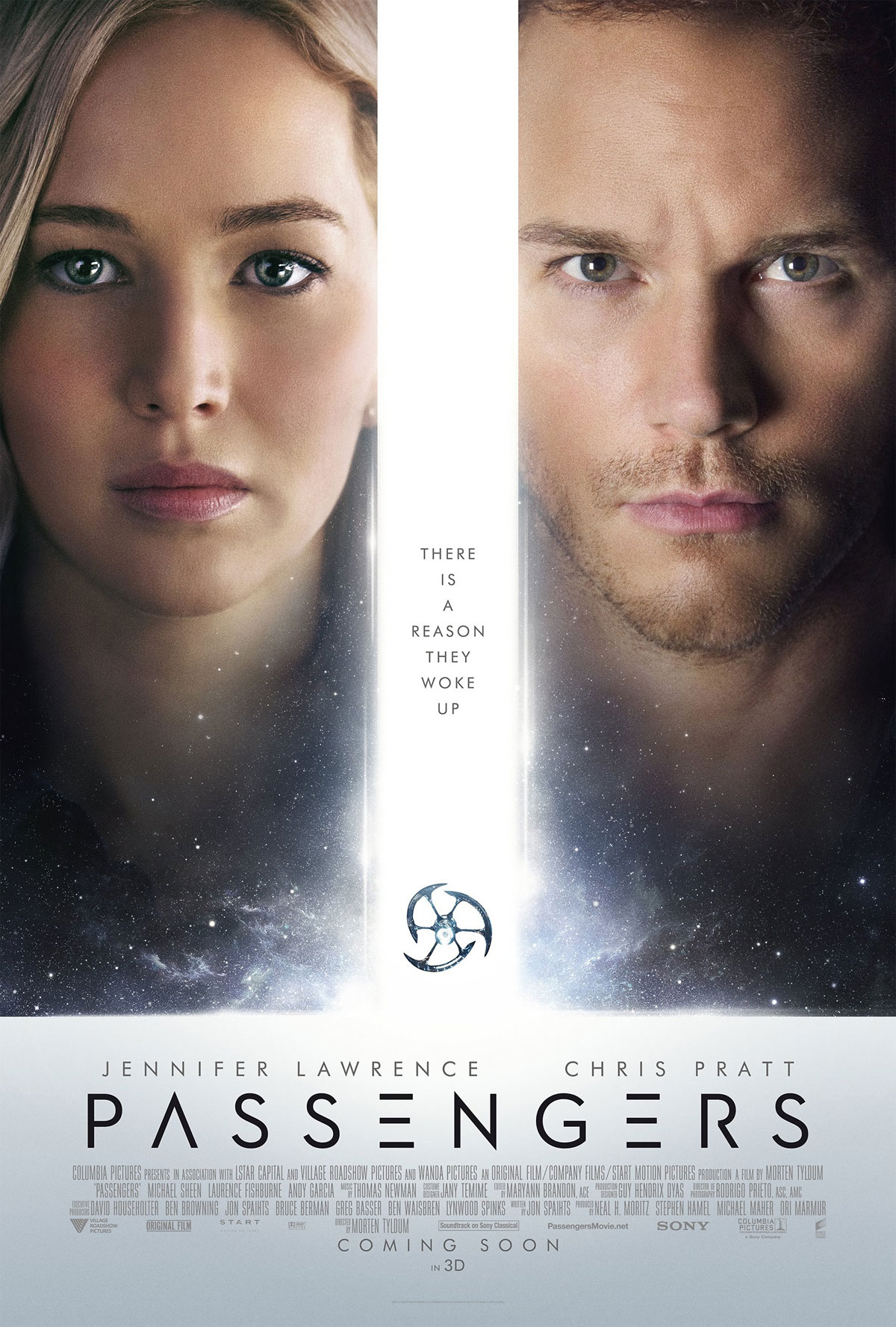 This seemed like a spectacular way to take two of the most popular actors working and somehow swing and miss so badly. Seriously, though, how do you write what amounts to a two-person (and one android) stage play with the two most charismatic people on earth set in space and make it completely conventional and dull? I would have to try hard to make Jennifer Lawrence boring. And Chris Pratt is a funny, engaging guy normally, but in this part is just kind of reduced to a few red-eyed, far-away looks and shrugs.

That all said, the movie had promise in its set up. A space ship on a 120-year voyage to settle a new planet is a mere 30 years into its trajectory when a space rock of some sort strikes the ship and causes damage that somehow manages to bring just one of the 5,000 or so inhabitants out of cryosleep. As luck would have, it’s Chris Pratt, the good-looking mechanical engineer. That coincidence aside, we set up a conundrum for Chris. He has 90 years of a journey ahead of him, utterly and completely alone. Obviously he will die of old age before they arrive at their destination, which is no bueno. So there’s a whole goofy sequence where he goes around the ship, playing some sort of VR dance-battle game, finding out that as a non-gold member he is only allowed to have regular coffee and not the fancy stuff, and interacting with various Spanish and French-ish robots in the different restaurants on board. This whole eating and drinking thing is a gigantic plot hole among a multitude of plot holes that are so big so as to be almost overwhelming. All of the exposition comes courtesy of an android bartender in a bar that is decorated to look exactly like the bar in the Overlook in The Shining. And, obviously, the bartender is the stand-in for that movie’s bartender, Lloyd, who Nicholson speaks to in his wandering delusions. The initial silly montage sets the scene for a light-hearted film. But then the clear The Shining reference makes us think something darker is going to happen.

After a year of wandering around with nobody to talk to, Chris (Jim Preston) starts wandering around amongst the sleep pods and discovers Jennifer Lawrence (Aurora Lane). For some reason each passenger apparently has a video Q&A about in the ship’s system about why they want to be a pioneer. He watches her videos and reads all of her articles (she’s a reporter) and “falls in love” with her. His conundrum set, we quickly get into the moral question of whether or not it’s ok for him to wake her up. But of course it’s not. He’s going to die on the ship because of an accident. Waking her up (remember, he’s an engineer and figures out a way to do it) means essentially sentencing her to death as well. Not cool. My first issue here is that they should have had him be alone for more than a year. For some reason that seems short to me. They should have had him be at at least a couple years when he started considering his treachery and then wrestle with it for at least a couple more. This could have followed the darker path the movie should have taken. His hysteria and loneliness driving him to obsession and an eventual rash decision. But we know that you don’t hire this actor to play that part. You hire him to play the hero, not the dark, plotting lunatic. So we know the film only has one direction to go when he wakes her up and proceeds to chastely pursue her admiration and, eventually, her love. And you just know that she had to find out the truth at some point and then he has to be redeemed for what is ultimately a terrible, selfish crime.

Thing is, I wanted to see that dark film, not what amounts to a space rom-com. I mean how many movies start off with the crime of omission (I’m not really a lawyer, I’m a bank robber, etc) which leads to romance, which gets undone when the lie is revealed and then the man spends the back half of the film showing the woman that he is a great guy at heart and though he lied to her at first, he’s been real about everything else since? It’s a classic. And this is that with a little sci-if mixed in. But it might as well have been You’ve Got Mail (also staring two very popular, very charismatic actors).

Did I mention Larry Fishburne shows up for a very short stint? He doesn’t seem to know what movie he’s in and his role is superfluous and just kind of a bridge to get the characters to act three. And his acting is, well, embarrassing. The other two are their usual selves. Pratt plays the goofy stuff well and is good at acting with his face (including facial hair) and she is an expert cryer and does her usual good job at not seeming like she’s reading from a somewhat awkward script. But the whole tone of the film is wrong. It’s like they couldn’t decide if they wanted to just do a light space rom-com or make some bigger point about corporate opportunism or the trite “don’t let a good thing slip away even if the psycho woke you up and essentially killed your opportunity to keep living.” From scene to scene it’s unclear what the film’s point of view is. It’s all just kind of a mess. But, I’m telling you, the dark version of this film could have been pretty spectacular. Or at least not a dull thud of a flick.