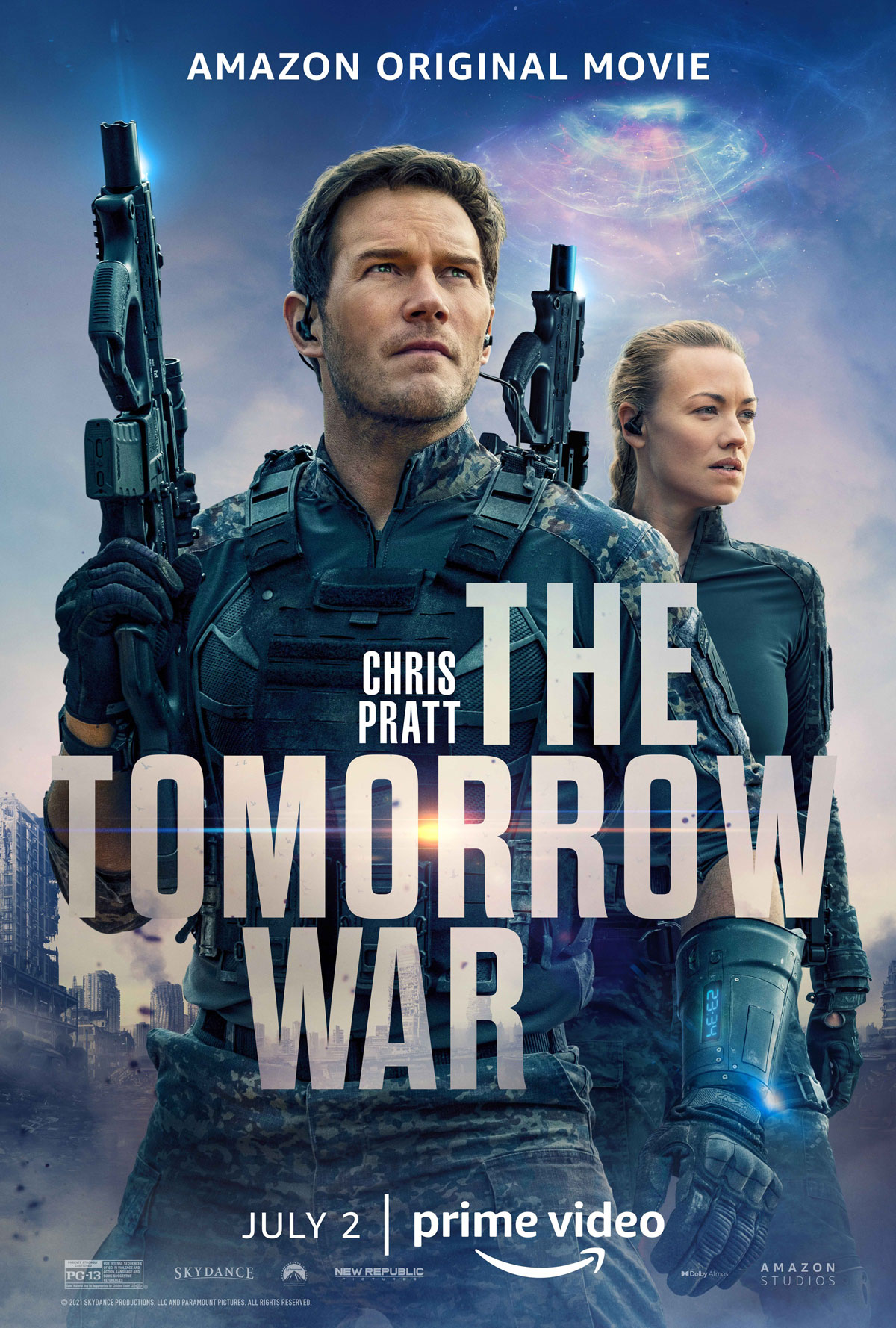 I’m not sure serious Chris Pratt is our favorite Chris Pratt. Watching him as a competent, smart hero-type feels antithetical to what makes Pratt Pratt. Like in Jurassic World he’s a little too self-important and macho to be likable. But in Parks and Rec, where we first came to know him, he’s a lovable, dumb lunkhead. And in Guardians he’s en earnest, quipping man-child. That’s the Pratt we like and deserve. So you know when you see Chris in the poster in his futuristic soldier suit holding a big gun while staring out into the distance that this is not necessarily going to be what we look for in this Chris.

Truth be told, I spun this one up because I wanted something mindless to put on in the background while a storm rolled in on our vacation house. I should know better, however. Because I have real trouble not paying attention to things I’m watching. Even the worst movies or shows draw me in and and distract me from whatever it is I’d planned to be my primary activity. Why else do you think I watched the entire The New Adventures of Old Christine series, or two seasons of Men of a Certain Age? So, there I was watching every explosion, every alien attack, all while doing my usual thing in trying to not get annoyed by the time-travel dynamics of the thing. Because, alas, this is yet another time-travel, sci-fi flick. Because of course it is.

At least they kept the plot relatively simple. Dan Forester (Pratt) is a high-school bio teacher. But he’s also an ex-green beret! And also a brilliant scientist of some sort (on this point they’re vague), who is frustrated with his lot in life and has just missed out on some prestigious consulting job. This is all set up in a super-vague and rather snoozeriffic couple of scenes that feel like incredibly bad exposition that bog down what is otherwise a pretty bang-bang-bang act two. At two hours and twenty minutes, they could have easily trimmed a bunch of this backgrounder and been fine. The weirdest part is that we’re introduced to a house full of suburban Americans celebrating Christmas by watching what I think is supposed to be the World Cup. Which makes no sense since the World Cup is traditionally played in the summer. Unless it’s supposed to be the 2022 World Cup, which is scheduled to end on December 18 because it’s about a billion degrees in summer in Qatar. Whatever the case with the dates, there’s an immediate disconnect watching all these traditional southern white folks watching European football.

I suppose the whole reason to show the World Cup and not like a Christmas NFL game is what happens next. A group of futuristic soldiers crash the game (literally) and announce that the world is at war with aliens in 2051 and they need people to go into the future to help fight. You know, since the aliens have already wiped out most of the human race. Hipster Jr. Jr. pointed out that the main soldier somehow made this announcement in a giant stadium without the aid of a microphone — which seemed like a pretty big oversight — but I’ll let that go. Sort of. Anyhow, making it the World Cup, rather than a nation-specific sporting event, makes it so the entire world hears this announcement. So I get it. But it still felt weird.

So, this introduces plot hole number one. We understand these scary aliens have wiped out most of humanity and overrun the Earth, so it makes little sense that sending these very small groups of barely trained draftees into the future for a week would make a lick of difference. Let’s say they’re even beaming in 500 people at a time for these one-week tours of duty… How is that in any way going to combat an entire planet filled with aliens? We understand most of the people don’t last the week anyway. So what’s the point? It seems like a giant waste of time and a serially bad way to spend human capital. You’d think it would be more advantageous to take those same groups of people and start erecting walls or researching how to kill the aliens when they show up 30 years in the future. Seriously — this plan is as shitty as it sounds. There is also the issue of all these people from 2021 dying in 2051, which would preclude them from procreating any time after 2021, thus lessening the population that is due to fight the aliens in the real 2051 timeline. Anyway, it all seems self-defeating.

After all this, the thing basically turns into a shoot ’em up with the usual time-traveling complications thrown in. You know, dating your own mother, being your own son, accidentally inventing time travel itself. Actually they don’t do a whole lot of that bootstrap stuff or time traveling theorizing. I suppose this is a little bit of a spoiler, but it happens pretty early on — but Forrester goes 30 years into the future only to be under the command of his own daughter! The one who was just a small child hours before! And now she’s the evil blonde woman from The Handmaid’s Tale, Yvonne Strahovski. She’s also a bad-ass soldier/scientist just like her dad. And boy does she have a tale of what happened when her dad got back from his one-week tour of duty fighting aliens. Or at least I think that’s how that timeline worked. Of course then we get into some of that time-travel confusion. If she’s telling him what he’s going to do when he gets back, then he can change it. But wouldn’t he have met her the first time as well and not been a douchenozzle when he got back? I think that’s what we call paradox. But they don’t really go into that here, because this is less a time-travel movie than a family war movie. So the mechanics are kinda squishy.

And then there’s the kind of end feint. There’s this whole cockamamie plan to take something back from the future in order to kill the aliens in the past before they can take over the world. The plan is really dumb and Pratt’s role it in kind of foggy. But this act three is bisected into two parts. It felt not unlike A.I. — a film I dug, but everyone else hated — where you thought the thing was over, but then there’s this whole other piece to it that is, frankly, kind of a mess. Like the way the characters go about it is moronic. I don’t want to spoil it, but suffice it to say that it would be the equivalent of having the drop on a bunch of enemies in a valley from a perch above them. And instead of sniping them, you stand up and run down the trail toward them yelling, “hey we’re here to shoot you!!!” Dumb.

Ultimately, you could watch this as I originally intended and eat up two-and-a-half hours watching aliens get splatted. While enjoying a still-charasmatic Pratt play action hero. While you do online shopping. Or play one of those games that people play on their phones. Or maybe smoke something, get a big bowl of Doritos and a couple buddies and pretend this is a not-so-good version of Independence Day. It’s fine popcorn fare, but is too generic and is a little too vague and unsure of itself for its own good.