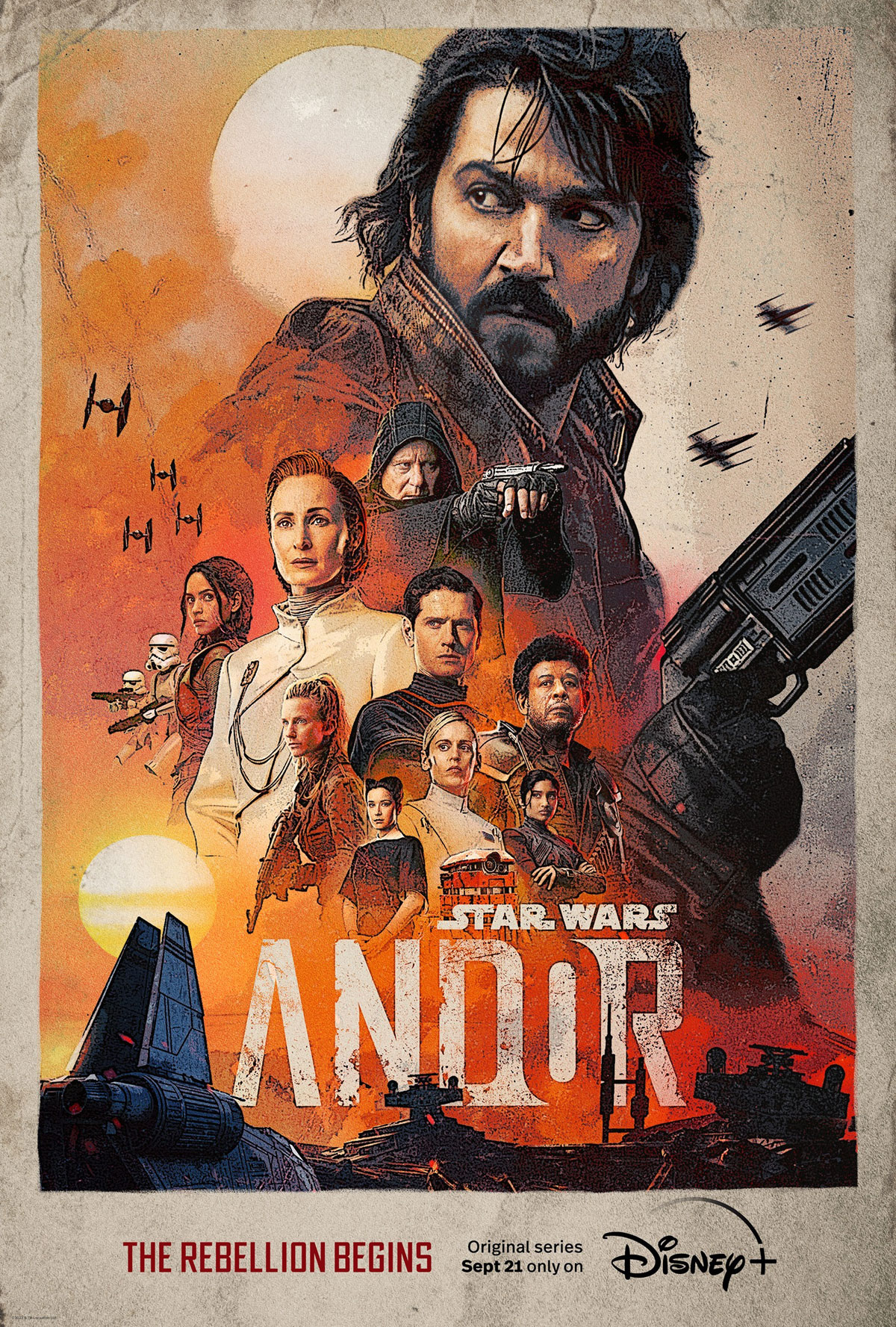 I feel like Rogue One is a criminally underrated film. Not even from a Star Wars perspective, but just as a film. Easily in my top two or three of the entire Star Wars universe. However, I had no idea the universe was as large as it is outside of the main movies and the various Disney+ series. There are cartoons and all sorts of stuff that is apparently canon. I don’t follow any of that stuff. But hell yeah to a prequel of Rogue One. Which, in itself is a prequel to A New Hope (aka Star Wars). Andor comes to us with a lot of hype. Platitudes and lots of praise about just about everything. I mean, the poster is pretty rad, so…

I’m not a person who is great at remembering names. Especially nonsensical names. Made up planets and people and robots and shit. They’re not Robert and Steve and Jupiter. And sometimes these sci-fi series get deep in the wacky names and I end up pausing to be like “Who the hell is Magmana-Mamna versus Magmana-Muftasa?” It’s like a space-aged Gabriel García Márquez novel. And it’s not good for my enfeebled brain. Now, Andor has quite a bit of this — as does every Star Wars tale — but in the capable hands of Tony Gilroy, I was way less confused than I normally am. Subtle on-screen titling, just enough exposition, flashbacks and repetition of names and backgrounds keeps the story moving, while also keeping my old brain from bumping on the administrative stuff. Clearing the way for narrative and visual enjoyment.

Looking back, my absolute favorite thing about Andor is that they didn’t do the stupid George Lucas shit. Not prat falls or childish, goofy characters or broad robot comedy (that is entirely not funny). And no cheesy, embarrassing dialogue. It’s the same reason I loved Rogue One. It’s something that has also bothered me about some of Spielberg’s films — who, of course, is a protégé of Lucas. I don’t mind the schmaltz, but you’ll be rolling along and out of nowhere you’ll get some dumb comedy that may be funny to a five year old, but is just jarringly stupid to any adult in the room. Andor remediates any and all of this. Sure, it has the adorable stammering robot, but it doesn’t like shock someone in the nuts or fall over in the mud and have a dog pee on it, or whatever. Because nobody wants or needs that.

So, here I am in fourth paragraph and I’ve actually said very little about the show itself. Mostly because you’re either going to watch a Star Wars show, or you’re not. For instance, Hipster Jr. Jr. makes me watch every superhero show with her on the Disney+ streamer, but has no interest in watching this thing. Though she was excited for and did watch The Mandalorian. I’ll chalk that one up to Baby Yoda. This one is going to appeal to Star Wars completists and even fans of grittier heist films. Because that’s ultimately what this thing is. Our main character, Cassian Andor (Diego Luna), just straight-up murders some dudes. That is just not your typical Star Wars hero. Though if you’ve ever heard of a minor character named… Han Solo, you’ll probably recognize his resistance to furthering the rebellion cause in favor of self-interest. Only buying into the aforementioned huge heist to help the rebellion with promise of a big pay day. The dude is not political. Or principled. Until they kill his dog! Sorry, that’s John Wick. But, yes, other shit happens to him, and we are shown what happened to him in his past, that would motivate most people to be huge supporters of the contra-Empire movement. He’s just slow to get there.

The series looks great. This level of special effects is amazing for a television show. In fact, it looks better than most of the films I recall — save Rogue One. In fact, the aesthetic is remarkably similar (I’m sure intentionally) to Rogue One. It’s a great job of creating that continuity in reverse. Presumably season two will carry that look and feel forward, so that one could watch the two seasons of Andor, followed by Rogue One in succession and it would feel like a cohesive and seamless experience. Pretty cool. Now, your milage on Luna’s acting may vary. At least mine does. I think he’s a decent face actor. He looks appropriately put upon, and his greasy mane is a vibe. It’s just that Gilroy stuffs a lot of very smart dialogue into the mouths of his characters, and Luna is not a native English speaker. His English is fine, mind you, but some of the nuance of the delivery is lost in his accent and inflection. Lines that I’m sure are awesome on the page don’t quite hit with the same impact, as Luna struggles at times with patter that the script seems to demand. I’m sure if the script was in Spanish, he would absolutely kill it. But next to the rest of the native English-speaking cast, there is sometimes an obvious gap. Even in scenes with the awesome Stellan Skarsgård, who isn’t a native speaker, but has probably been speaking English for the majority of his 71 years, he just isn’t quite at their level.

This little quibble aside, I did very much enjoy the series. It suffered at times with a little bit of drag — especially in the prison work scenes, which were almost intentionally repetitive — but it also didn’t rush things or feel overly shoot ’em up. Gilroy really likes to take his time. And, yes, there are big battles or set pieces, but each one is built up to in a considered way. They all have purpose and direction. And you can see how each scene kind of builds on the next. This goes back to what I was talking about way back at the beginning of this review: the show is just planned out very well. It makes the narrative easier to follow (even though parts of it can be pretty complex) and the action of it more compelling. We see the evolution of Cassian’s feelings. As well as the evolution of the other secondary characters, even on the Empire’s side. The working stiffs who aren’t inherently evil, but are motivated and ambitious in a seemingly innocuous organization meant to maintain order, but is, in fact, a fascist, totalitarian regime. But, hey, who hasn’t perpetuated evil accidentally? Ultimately, this is a really great looking show with wonderful dialogue and, obviously, a ton of lore from which to draw. It’s kind of a home run on paper, and is translated amazingly to the screen. I’m excited to see how season two falls perfectly into place. Because, again, the most impressive part of all of this is the planning.