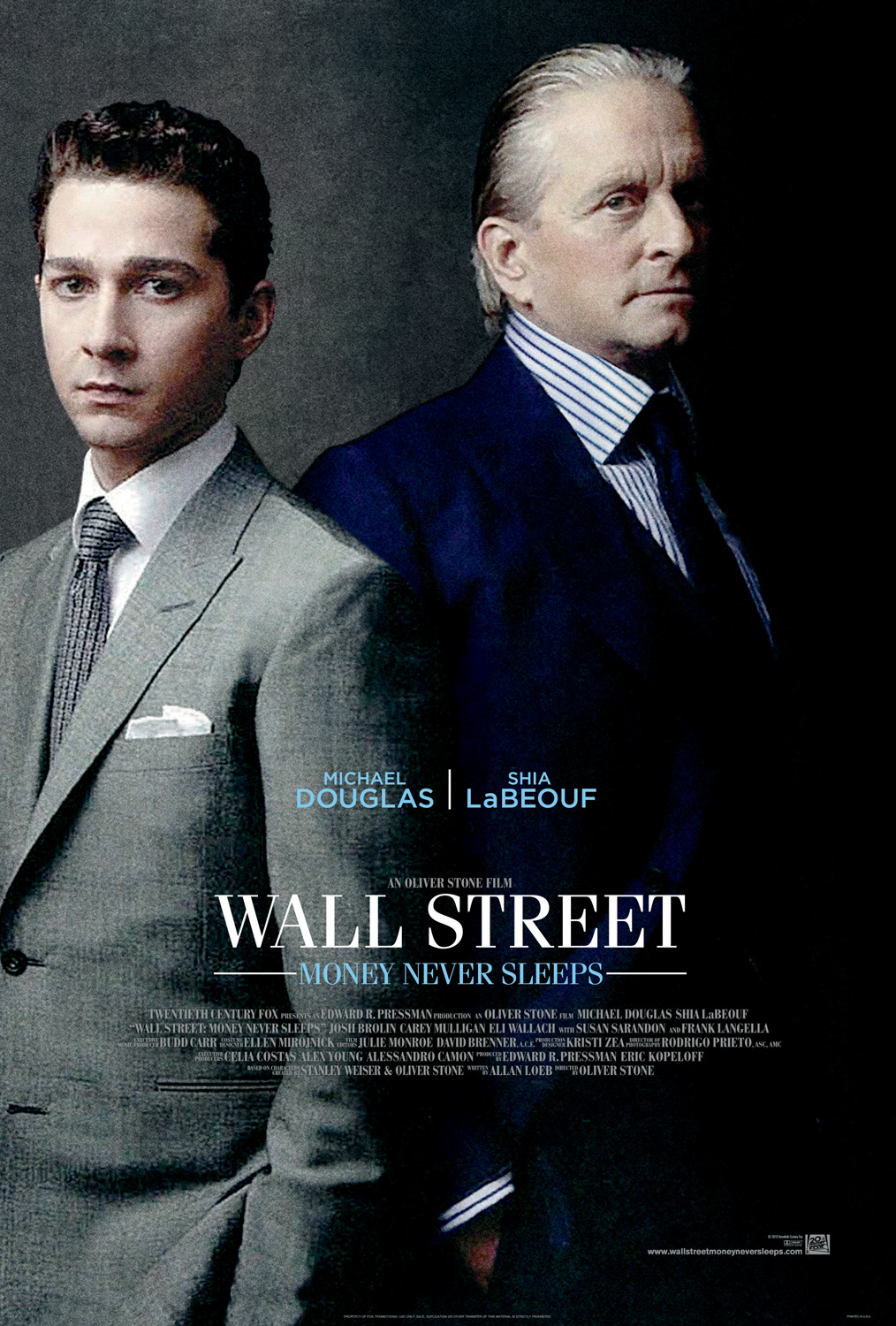 A film for our time. A film out of time. A film from another time. All could describe, or have been used to describe, both the first Wall Street back in ’86, and now this follow-up Wall Street: Money Never Sleeps. It just seems that the general public is way more versed about how Wall Street and the economy works these days because of our “crisis” and the Professor in Chief, Mr. Obama. And, believe me, an educated public is a good public.

Back in the day, those Wall Street guys were just dudes in big-shouldered suits in ivory towers and limos filled with coke and silicone. They were the men of Bright Lights, Big City, The Bonfire of the Vanities and the Wall Street original–at the front of the line at trendy clubs, running over innocent victims with impunity and taking baths in unicorn semen. They were gods walking among us–or so those films/books would have you think. Viewers and readers wanted to hear about how much they were snorting, who they were fucking and how many planes they had simultaneously aloft. All of the financial stuff was secondary. After all, their wealth was their wealth. Them getting rich didn’t affect us. They got paid in Jesus bucks and shat diamonds, where as the rest of us deposited a paycheck with little to no connection to their doings. Clueless public. And then the housing bubble burst and financial meltdown occurred and everyone and his mother starting caring about credit default swaps, derivatives, bailouts, balance sheets and Wall Street bonuses. They knew who Lloyd Blankfein was and cared that Tim Geitner reminded them of that ineffectual, stammering math teacher they had in high school who was hired just because he happened to be the coach of the US junior Olympics water polo team. In other words, all this stuff mattered now that they realized that those damn Bud Fox and Gordon Gekko characters and their propensity for risk halved their retirement savings.

Enter the new Wall Street–a timely narrative chock full of financial buzz words and dealings that ten years ago would have bored an audience into comas. But now things like margins are exciting and high energy. Granted, despite being with Ms. Hipster since even before her early days as a financial reporter, I have gained no more than an once of understanding about the fed, debt, stocks and any other manner of financial nonsense. So the movie, while dumbed down for the general public, still made little to no sense to me in terms of the main plotline. I was told afterwards by several people way smarter than me about this kind of thing that they really only got the financial meltdown thing partially right. Although they may have had to cut corners on the details so slackers like me could even keep up. But, as you can imagine, the movie is set against the real backdrop of Wall Street and the eventual crash. Of course, this is Oliver Stone, so it’s done with all the subtlety of a freight train running through an egg factory. One particularly cringe-worthy scene showed children playing with soap bubbles in Central Park right after the black week of October 6, 2008. Shia LeBouf walks by and the camera follows the large bubbles up into the sky as they burst with an audible (and cartoonish) popping sound. Ew.

Stone does have some very nicely filmed scenes in and around NYC, including a crazy crane shot (or something that approximated one) that twirled up the outside of the Lipstick Building. And lots and lots of helicopter and swooping shots through and over midtown Manhattan. Pricey to be sure. His script, though, jumped around like a bunny ablaze. Not content to follow one narrative, he spins out in several directions at once–trying to cover the larger story of the crisis and the internal struggle of the newly free Gordon Gekko, Shia LaBeouf’s Wall Street trader character, Gordon’s daughter/Shia’s girlfriend and a cast of bad guys, bureaucrats and random celeb appearances. The funny part is, this plotline actually takes a more traditional Hollywood turn, becoming less of an insider dealing approach and more of a straight forward scam/twist thing. You’ve seen it in every con/bank heist movie ever written. There’s a bunch of money that everyone thinks they are in control of and then one day they go an office that their “business” partner has been working out of only to find it completely emptied and the money gone. The moral of this story being, I suppose, that you should never trust a greedy asshole cuz he’s always going to be a greedy asshole? And that seemed to be the end of that, until that greedy asshole shows back up and everyone seems to forgive him. Cue the credits. Cue the groans from the audience.