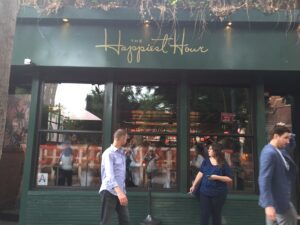 It’s not enough that I walk into work every day and feel goddamn ancient. Then I have to go to an early bird dinner for a drink and a burger and have to be bombarded with the needling chatter of the young. Like tables and tables of them. And they’re all so peppy, and the guys are so beardy and thin. But in like a completely inoffensive way. And the help is also young and hip and they actually smile a lot and are quick with the food and seem okay doing the job they’re being paid to do. How absolutely un-Gen Y of them.

But the real reason I was there with Ms. Hipster was not to ogle millennials in their natural habitat, but rather for their Eater-approved burger. Yes, the lowly burger, ever since Sang Yoon bought Father’s Office in Santa Monica (a joint I formerly hung out in before it got all upscale) in 2000 and put a bunch of fancy shit on it and charged a ton of dough for it and allowed not a single substitute, has become something gourmet and revered and talked about in ways only their more kingly cousin the steak used to be talked about. And it’s amazing. So The Happiest Hour consistently makes some of NYC’s top lists, but gets on there in a classic burger sense and not a foie burger or laden-with-craziness way. And that’s how burgers have made their way into the food-o-sphere these days, as delicious hunks of meat, classically prepared and endlessly edible.

Surrounded by a retro tiki-by-way-of-Australia decor, which just makes everything much more merry, I went with The Happiest Burger. Described simply as: “Two all beef patties, American cheese, lettuce, tomato, pickles, confit onions, special sauce,” it is indeed nothing but simple. I generally get my cheeseburgers “plain,” which at some place like McDonalds means that sad patty with a slice of fake American cheese (which is redundant, I know) on that Nerf-like bun. Here, I decided to actually just go with what they served, including the “special sauce,” which was probably some combo of something that I would normally shutter at and would reject out of hand. Here, I gladly ate it. Why? Because the critics told me I should love it. And, honestly, it’s no Minetta Black Label Burger. Or even The Spotted Pig’s wacky roquefort burger. Or even the old McHale’s burger or Old Town’s burger or even some other old-school joint like Peter McManus that has been seasoning that grill since 1936. That’s all subjective, of course, but with the exception of the first two I mentioned, I’m happiest with a greasy bar burger on a bloody paper plate, served with overly-hot fries and a pickle wedge. That said, this is a tasty burger kind of in the spirit of those older-school burgers. I wouldn’t kick it out of bed for bleeding on my… Ok, that’s not attractive. Anyhow, I learned, after wolfing my burger with all the fixins (and pairing it with a decent Manhattan), that perhaps there is something to this burger thing — and I think it’s on its way to stickin’ around.