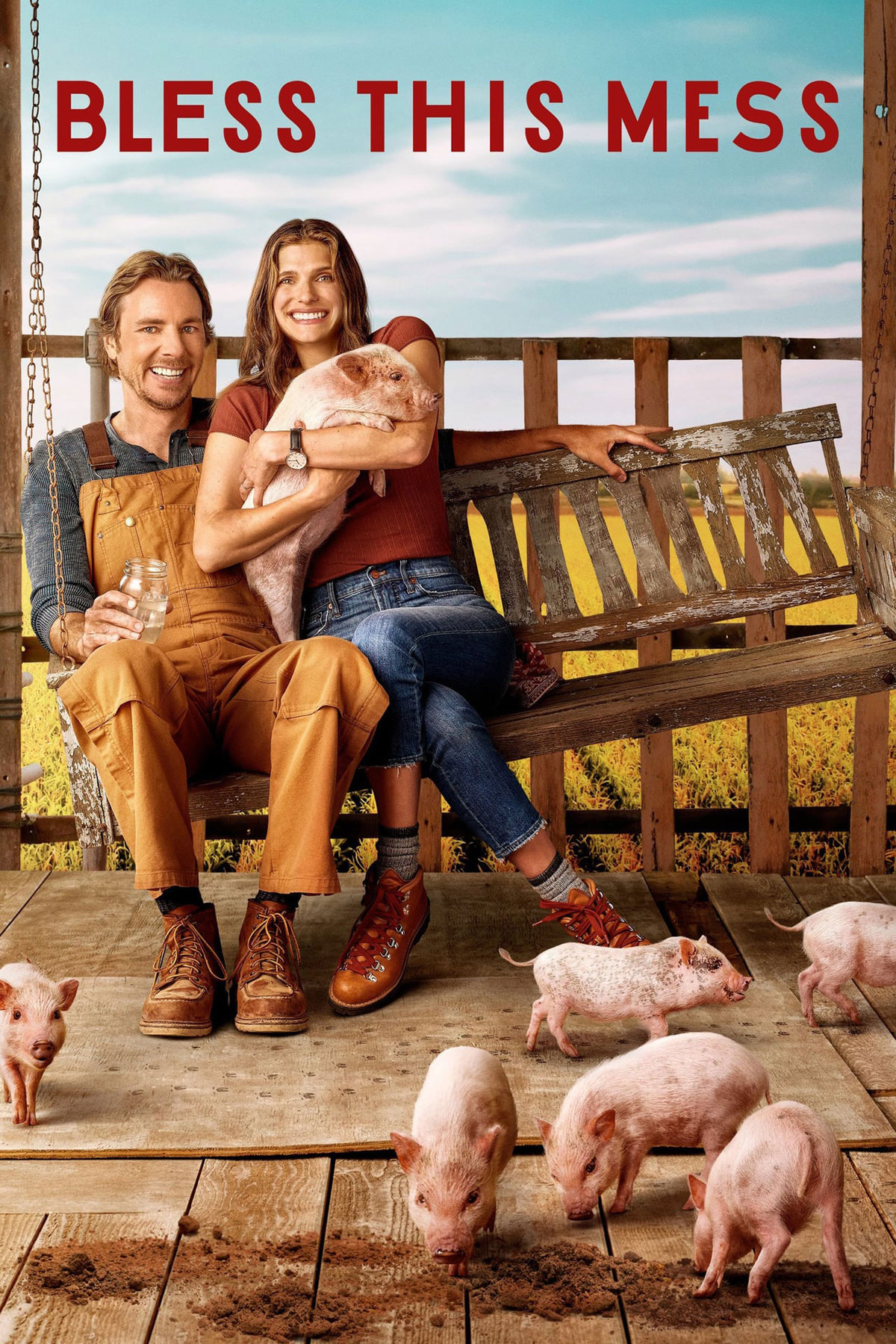 Look at me going all mainstream with this Bless This Mess thing. I mean, an ABC sitcom fer god’s sake? Have I lost my mind? Actually, I’ve gone with this exactly to save my mind. All the darkness and chaos in our programming, paired with the darkness and chaos in our real world made me reach for this sunny piece of nonsense in order to just counteract everything going on. Even though I’m generally against the whole naming a movie or show after a song lyric or homey kitchen signage.

Turns out that the show — or at least the first season — isn’t half bad. I have a vague notion of the show Green Acres, of which this show seems to be a remake. And, like that show, it is light as air. There are no heavy topics or anything even remotely political in a show where a couple of NYC lefties up and move to the reddest of red country. Nary a mention of anything controversial or even serious. This could be a show in any era. It’s timeless (save some Internet dating and porn jokes) and unafraid to be completely devoid of substance.

And, again, when I’m looking to just put this shitty time in history behind me, I am just fine with an escapist fantasy land that throws jokes at me every couple of minutes. Because when a music journalist named Mike (Dax Shepard) and his therapist wife, Rio (Lake Bell), and their hyphenated last name, Levine-Young, give up all their fancy-pants lattes and move to Bucksnort, Nebraska, everything is just funny. Even Bucksnort is just this incredibly generic Midwestern town, which could just as well be in Indiana or Iowa. Missouri or one of those other I or O states. It’s the LA writer’s idea of what one of these towns looks like in a funhouse mirror. No red MAGA hats. No racism. No obesity. No opioids. No Thursday night at the Golden Corral. And that’s just fine.

Instead you have this fish-out-of-water tale with a couple sheltered city folk who inherit a broken-down house on a farm and have to learn how to be human beings. They have wacky neighbors and what appears to be a brain-damaged Ed Begley Jr. living in their barn with a goat. The entirety of the first season is literally watching Shepard misremember past summers spent as a child in Nebraska, the town’s memory of his past dorkiness and the clear point that being a music journalist prepares you to be absolutely nothing useful. And Lake Bell, who seems to be one of the worst therapists ever. Because, like most therapists, she is herself a mess.

So we are reliant on our two stars being funny. Having decent interactions with each other. And chemistry with the rest of the cast. I know it’s been years, but I still can’t help but think about Shepard being Ashton Kutcher’s dumb friend on Punk’d. But somehow he got Kristen Bell to marry and procreate with him, so my respect level has gone way up. And he’s funny. I’m not sure I buy him (or most anyone else) as a music journalist, but he has this affable air and pretty decent comic timing. Lake Bell, likewise, is actually pretty great as the Jewish princess plunked down in cow town. She is all nervous energy and fast talking. It draws a nice contrast and gives us costal elite types someone to anchor ourselves to.

The thing is, fish-out-of-water is such a tried and true formula because it works. There are a bunch of different variants based on perspective, but it’s generally funny watching people constantly discovering how they’re stupid, ignorant and dumb in new and inventive ways. In this case we get to laugh at the big city folk as they bumble and fuck everything up. Fixing a house, growing crops, buying chickens and harvesting eggs (if that’s what it’s called). Their idiocy about practical things has no end. Granted, their cluelessness is a bit hyperbolic, but busting on and stereotyping educated white New Yorkers is completely acceptable. And, as one, I’m all for it. Even though I have an extensive vinyl collection and a subscription to The New Yorker (that I don’t read), I would suck at tilling a field.

There are enough jokes and Shepard and Bell and their co-stars to keep the “we’re new in this weird world” going for one season. But like most tales of its ilk, things become not so fun once they master their surroundings in the season one finale, as that’s their logical arc. Because then we just limp into plots that could be happening in any situation. Couples are struggling with relationships. Nice, because, remember, Bell is a therapist! Oh, there is a local paper. Cool, Dax is a writer! Sort of. Uh, we didn’t talk about this before, but maybe the two of them are worried about having kids, so maybe it’s time to try. Maybe. Which, again, could be a recurring plot on any show not set on a farm with a couple Gen Xers.

Also, Bell is 41 and Shepard is 45. And, yes, they’re both very attractive young-ish-looking people, but I’m getting tired of characters in their forties just kind of getting to the discussion about kids. Dudes, you ain’t 27. Shit, you ain’t 37. This happens in films and shows all the time. Who is still panicky and unsure about having kids years into their relationship when they’re practically at the end of their egg reserves? Biology, people! But I know this is a sitcom, so I’ll just ignore it. Anyhow, there is still some funny stuff in season two, but it’s a shadow of the high points of season one. The energy just isn’t there and the gags not anywhere as sharp. So, my advice is to binge season one as a background show if you’re feeling like this world is just too damn dark. It’s light and breezy and Bell is nice to look at. And Pam Grier is in it! And you also don’t have to worry about a third season, as ABC reached the same conclusion I did and axed it after two.