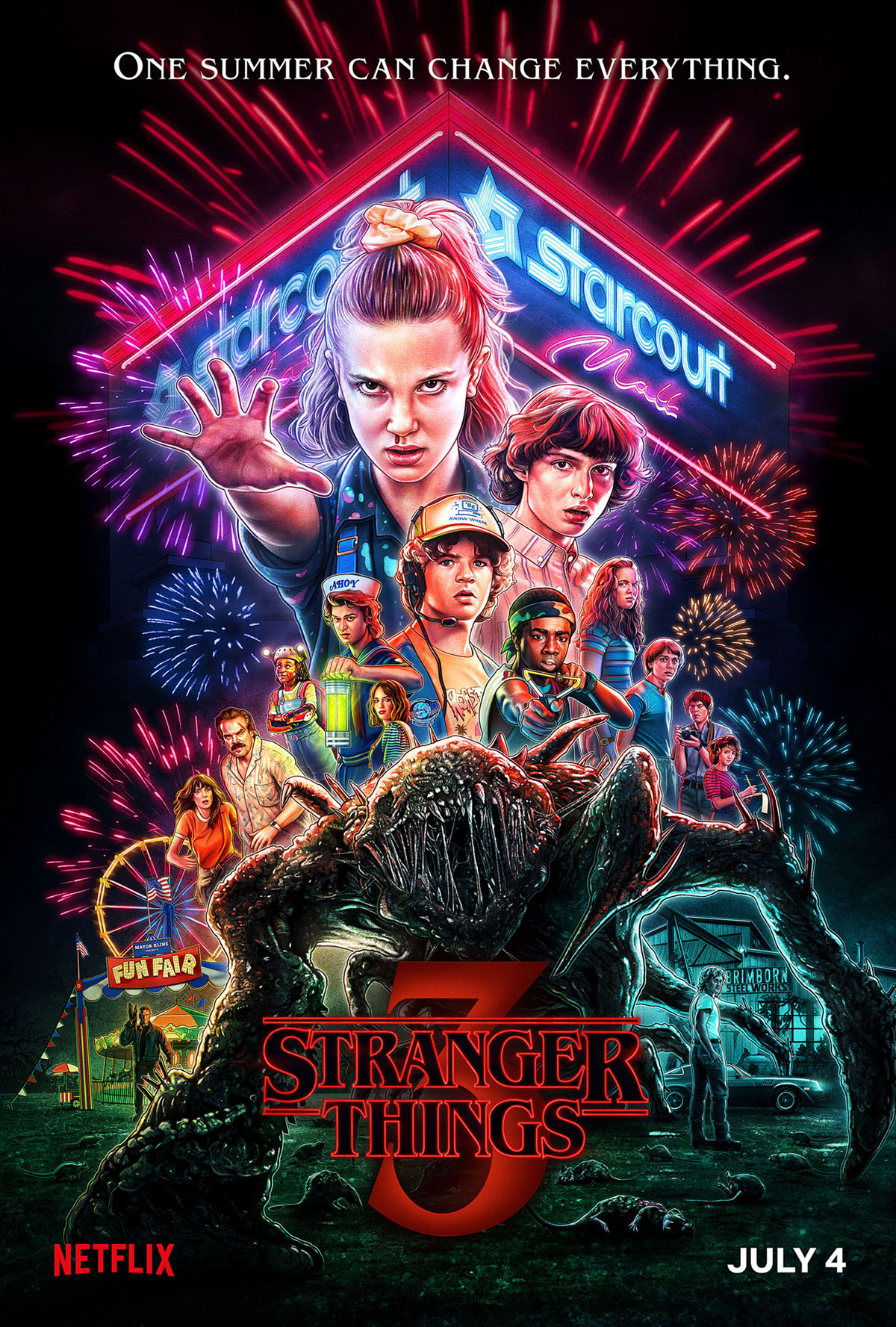 What can I say about a show like Stranger Things that you haven’t already heard? Casting a series that heavily features children is a risky endeavor?  They grow and become less cute. And all the child-like things that were once adorable are now being perpetrated by stinky teenagers and their hormone-riddled bodies. There’s certainly a story to tell there, but it’s this very tale that the creators and one of the actors in this extremely popular show kind of botched.

And the botcher-in-chief is David Harbour himself. I mean, what in the ever-loving glory hole that is this universe happened to this man’s acting? We get it. He’s now Eleven’s defacto dad. But of all the tropes for the writers and him to play on, we’re going to go with murderous rage because Mike and Eleven are making out in her bedroom? Like over-the-top, throwing himself around like his intestines are twisted because of some kissing? Watching Harbour huff and puff and turn all red in his manic panic over his teenage daughter is absolutely ridiculous and annoying beyond comprehension. All the wrong-ass energy we hated about Joyce (Winona Ryder) in the First Season somehow transferred to Hopper for the first chunk of season three, and I was not down for it.

That aside, the creators of the series have taken an odd meta-approach to the show. Folding in not only things from the 80s (video arcades, bad haircuts, short-shorts), but 80s movie references themselves. Not like there weren’t odes to 80s movies like E.T., Poltergeist and Firestarter and direct references to Ghostbusters in prior seasons, but this season seemed to almost steal from other movies. Witness the very Terminator-like baddie, complete with indeterminable accent, Schwarzenegger haircut and unkillability. And the very Red Dawn / WarGames rip this season. I appreciate the Easter eggs and stuff in the show and the 80s references, but when they borrow whole chunks of plot not from the decade, but from the movies of the decade, it’s a little too too.

We also run into the problem of the ensemble cast. At only eight episodes, there definitely didn’t feel like there was enough for several of the characters to do. Poor Will is an afterthought. Jonathan, besides looking completely strung out, does next to nothing. He and Nancy have kind of melded into one useless wet-blanket character anyway. Joyce doesn’t do a whole lot, but at least her character is way less annoying next to Hopper’s new anxiousness. Honestly, it turns into the Steve, Dustin, Robin and Murray show. Who the hell is Robin you may ask? Well, it’s Steve’s workmate at Scoops Ahoy played by Maya Hawke, daughter of Uma Thurman and Ethan Hawke. And she and Steve, paired with Dustin, are the sleuths who crack the Russian’s code. And Murray? That would be Brett Gelman as Hopper’s conspiracy nut friend who just happens to speak fluent Russian. He’s a scene stealer.

Let’s get this straight: the plot this season is nonsense. They’ve definitely leaned more heavily into the horror genre, but have mixed in Russian invasion elements as well. Gone is the Demogrogon in Joyce’s wall and visions of the Upside Down. This season we get the big bad, the Mind Flayer itself. And apparently the Russians are trying to free it into the world. Why? We don’t know. Presumably to harness its power somehow. Though, as we see, the Mind Flayer can be put off its game by a kid with an axe and a box of off-the-shelf fireworks. So, is the Mind Flayer really that much of a threat to anything other than the Starcourt Mall? Something that a very small cadre of dudes with some heavy arms can’t stop? Seems not. Then why are the Russians investing all of this time and money to free the thing? Nobody knows, and the show creators don’t really care to tell us.

There are a multitude of other things plot-wise that make no sense. How do the Russians build a gigantic and elaborate compound in the middle of town in a couple years without anyone knowing? Is Hopper only one of two cops in Hawkins? I feel like we saw some others in the past, but they are absent this year. That also assumes that Hopper is still employed as a cop, as there is no evidence that he still has a job other than sitting around drinking and making sure Eleven doesn’t touch Mike’s junk. I spent many years in the 80s buying a multitude of walkie-talkies (mostly from Radio Shack) and none of them worked beyond like 100 yards. Yet these kids’ might as well be cell phones for all of their range. Eleven kills several people. And we’re okay with this? The kids seem to be, and don’t even mention it afterwards. Robin picks up Russian (and code breaking) really quickly. Like she should reconsider her Scoops Ahoy career and go into the CIA immediately. Billy and Heather have become Mind Flayer zombies and nobody seems to notice their extremely peculiar behavior, including Heather’s parents, who sit across the dinner table from them and Max, who doesn’t question her half-brother’s weird personality shift. There are a million other issues/questions we’re left with this season, but this post is already too long.

That all said, I was entertained by these episodes. Could they have been better? Or made more sense? Oh, for sure. Was I disappointed that they weren’t better? Definitely. Thinking back, though, most of the enjoyment was in the moments of levity between Steve and Robin. They tried the 80s sassy young black girl trope with Lucas’ little sister, Erica, who was meant to be a foil to the Dustin character, which sometimes hit and sometimes didn’t. But at least they tried something that wasn’t watching Nancy and Mopeyface run around. And The Neverending Story duet was quite fun. On to season four, I suppose. Let’s hope for more fun character stuff and myth-building and less confusing gross-out silliness.