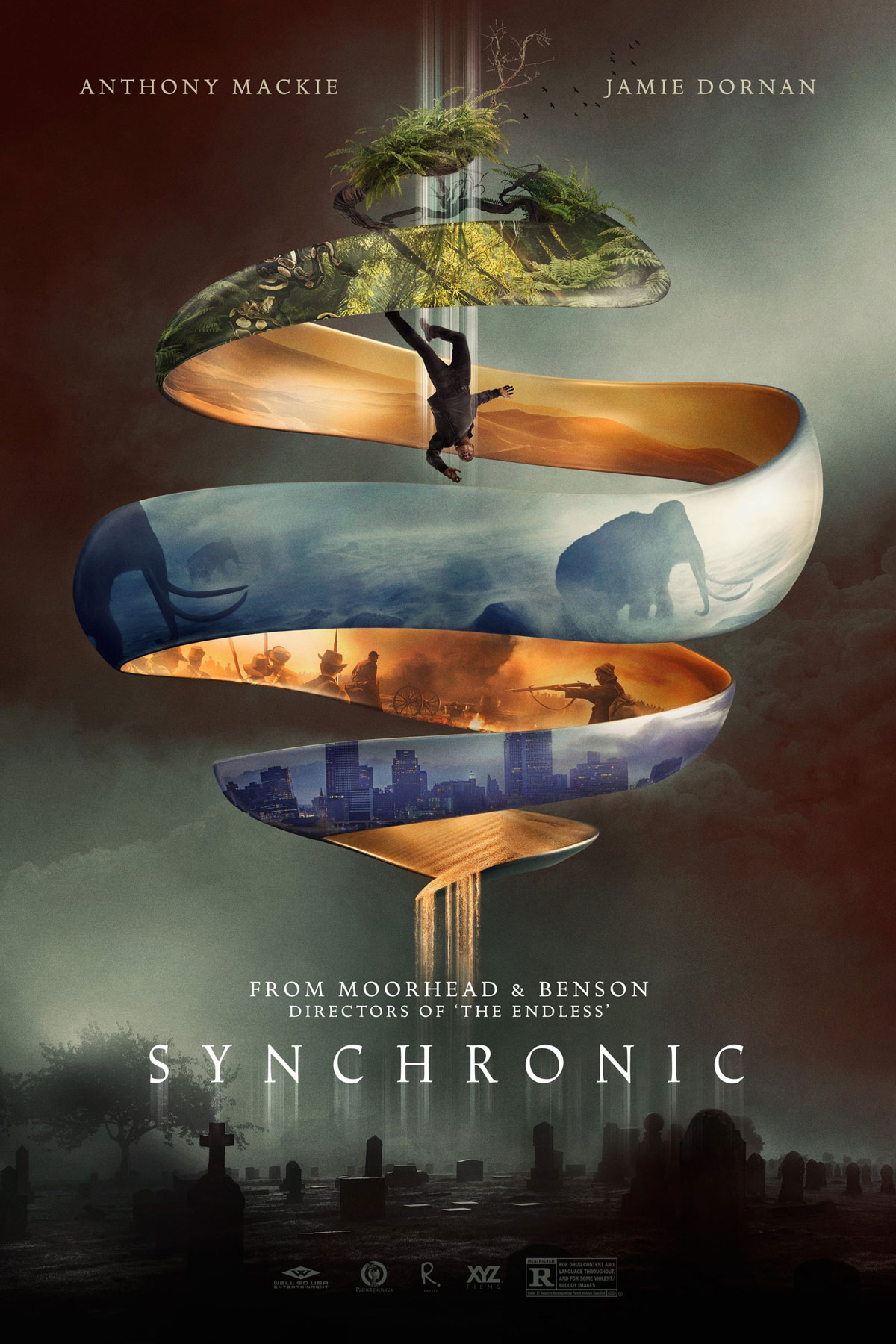 There are films that clearly spawned from a two-sentence pitch after which the creators looked at each other and were like, “Holy shit, what the hell are we gonna do now?” Turns out the answer is to make up some nonsense time-travel shit that is predicated on the time traveler being young-ish and taking some designer drug called Synchronic that is apparently only available in some random smoke shops in New Orleans? I can’t say this enough, but the explanation that sci-fi movies aren’t really about time travel, but about the choices we make (blah blah blah) is absolutely no excuse for just completely ignoring and being incredibly inconsistent with the rules of the sci-fi you’ve created. After all, sci-fi is supposed to be based in science. Otherwise they’d call it b.s.-fiction, I guess.

And, look, my whole review shouldn’t be me shitting on the film. Because it’s not all bad. I mean, it’s a lot bad. But just not all bad. After all, I’d just watched Aaron Moorhead and Justin Benson’s previous movie, The Endless, which also had sci-fi roots, but kind of gave over the sci part for more of a supernatural-ish thing. Which, again, was a bit a cop-out, but is more forgivable given its super-low budget and very indie-feeling flavor. I was indifferent to that movie much in the same way I was indifferent to this one. Because shit just didn’t make sense.

New Orleans is cool. I’ve been there a couple times in my life and it is very specific, very crowded and very atmospheric. Even in an oldy-timey movie like Interview With The Vampire, New Orleans just drips with personality. So it’s interesting that Synchronic and its two EMTs, Steve (Anthony Mackie) and Dennis (Jamie Dornan), seem to drive through deserted streets that could be just about anywhere, go on late-night walks in non-descript neighborhoods and generally run into very few extras in a city teaming with people. It creates an almost eery feel to the film — and it does look cool at times — but you really miss out on what makes New Orleans special. Seemed like a big miss to me. Especially considering a large part of the “message” in the time travel piece revolves around Steve, as a black man, specifically going back in time in racist-ass Louisiana. So, yeah.

Warning: this plot encapsulation is going to sound like completely fuckery. You have your two aforementioned EMTs. They do what they do, driving around New Orleans responding to heart attacks, injuries and overdoses. They also happen to be best friends, which I suppose is weird, but ok. Suddenly these weird cases start cropping up, all of which are accompanied by an opened packet of some mysterious designer drug called Synchronic. At the house of a stabbing victim they find an old sword in the wall, there’s a burned body that is seemingly burned with no accelerant and another convoluted death that involves a snake that is no longer found in the area. And then comes the way to pull the two men into the action. They show up at the scene of a party where a boy has died and they realize that — gasp! — Dennis’ teen daughter had been at said party and is missing. Literally disappeared off the face of the Earth. I could go into the weirdo reaction of Dennis and his wife to this news for three paragraphs, but I’ll roll that into the stunted character development bucket. They start to put together the fact that this drug is at the scene of all these calls and Steve jumps into action.

Steve drives around to smoke shops looking for Synchronic. He finds what is apparently the last cache of the drug at a smoke shop where the proprietor happens to have way too much info about the drug, knowing that it’s been discontinued and that this is the last of the drug. Which is basically confirmed when Steve walks out and, coincidently, the creator of the drug happens to be outside and offers to buy the stock off of him, presumably to destroy it. Now, I’m not going to go into distribution, supply chain and all that, but this whole thing is bullshit. And why, may I ask, were people buying Synchronic to begin with? Did the smoke shop tell them it would take then back in time where they’d be murdered by conquistadores or fall from heights? Yeah, not a great selling point. The name Synchronic would indicate that they knew the drug did something with time, yet they put it out there anyway? And, yes, I get that maybe designer drugs don’t go through rigorous testing, but you’d figure they’d at least test one or two of the pills before packaging them and sending them out to… only New Orleans? It makes absolutely no sense.

So, here are the rules of Synchronic, as far as I can figure it.

I’m sure I’m missing something here, but I feel like Moorhead and Benson must have drawn up a list like this and then did their best to try to shoehorn in the plot by bending and breaking their own rules. Or just coming up with excuses like the fact that, due to a tumor, Steve just so happens to have a non-calcified pineal gland. Like the only adult in the planet to have that condition. What a fuckin’ coincidence! And the fact that wherever you happen to be standing sends you to a specific time? Does that apply to the entire globe? To say there are basically an infinite number of times you can go back to? And what constitutes a different space? Like two feet either way? One foot? Not to mention, how on Earth could a pill that some dude created in a lab to mimic Molly (or whatever) end up causing time travel? There’s also this thing with a rock at the end of the movie that I puzzled over for an hour and still can’t make heads or tails of. Some misspelled writing that seemingly doesn’t belong to anyone. Seriously. That’s just a plot hole that we can’t even touch.

But, putting all of that aside, Steve decides it’s on him to go find Dennis’ daughter. So he experiments with Synchronic in his house, going back in time to meet all sorts of things. Mostly asshole white people and cultists who want to murder him. He seems way more distraught by his friend’s daughter’s disappearance than his friend does. Maybe because we’re told Steve is just a womanizing shitbag, while Dennis has been married to his wife for years, has a new baby (in addition to their teen daughter) and is more concerned with his crumbling marriage than his vanished daughter. Which, not surprisingly, is contributing to his crumbling marriage. And this, when you put aside all the time travel issues, is the real problem. We’re told Steve is an insensitive dude hopping from bed to bed, but are never really shown that character trait. He seems like a super-dedicated friend and a generally all-around decent guy. Sure, he’s in bed with a woman at some point, but he’s a single, good-looking dude… We’re told Dennis is selfish, drinks too much, is disparaging of his wife and family and is generally a selfish asshole. But we’re never really shown much of this. This is ultimately supposed to be a movie about friends and the bond they have in the face 0f adversity and whatnot. But we’re never really shown any of the stuff we’re told about. It all feels disjointed.

So when it comes down to it, are you going to walk away from this film with a sense that you’ve been duped by the gnarly trailer? A little, I guess. But are you more so going to walk away with the feeling that the film’s creators are on the verge of something cool? Probably. Like if they could pull all the pieces together, maybe get a little script-doctoring in to punch up the character development and emotional drop they’re clearly looking for, they’d be 90% of the way there. It’s also obvious they continue to skimp on some of the special effects and set decoration, which could be solved with moving some money around. We didn’t need Anthony Mackie in this movie. And apparently that Jamie Dornan guy is a known commodity as well. Mackie’s character also coincidently liked to study astrophysics or something, so he quotes Einstein, philosophers and theoretical physicists on the regular. As an EMT. It’s a flourish that’s completely unnecessary and seemed to strain Mackie’s ability to make sense of it. This is all to say that there’s potential in all this, but the insular nature of their filmmaking finds them inside their own heads and could probably do with some outside assistance to help focus and fix the inconsistencies.