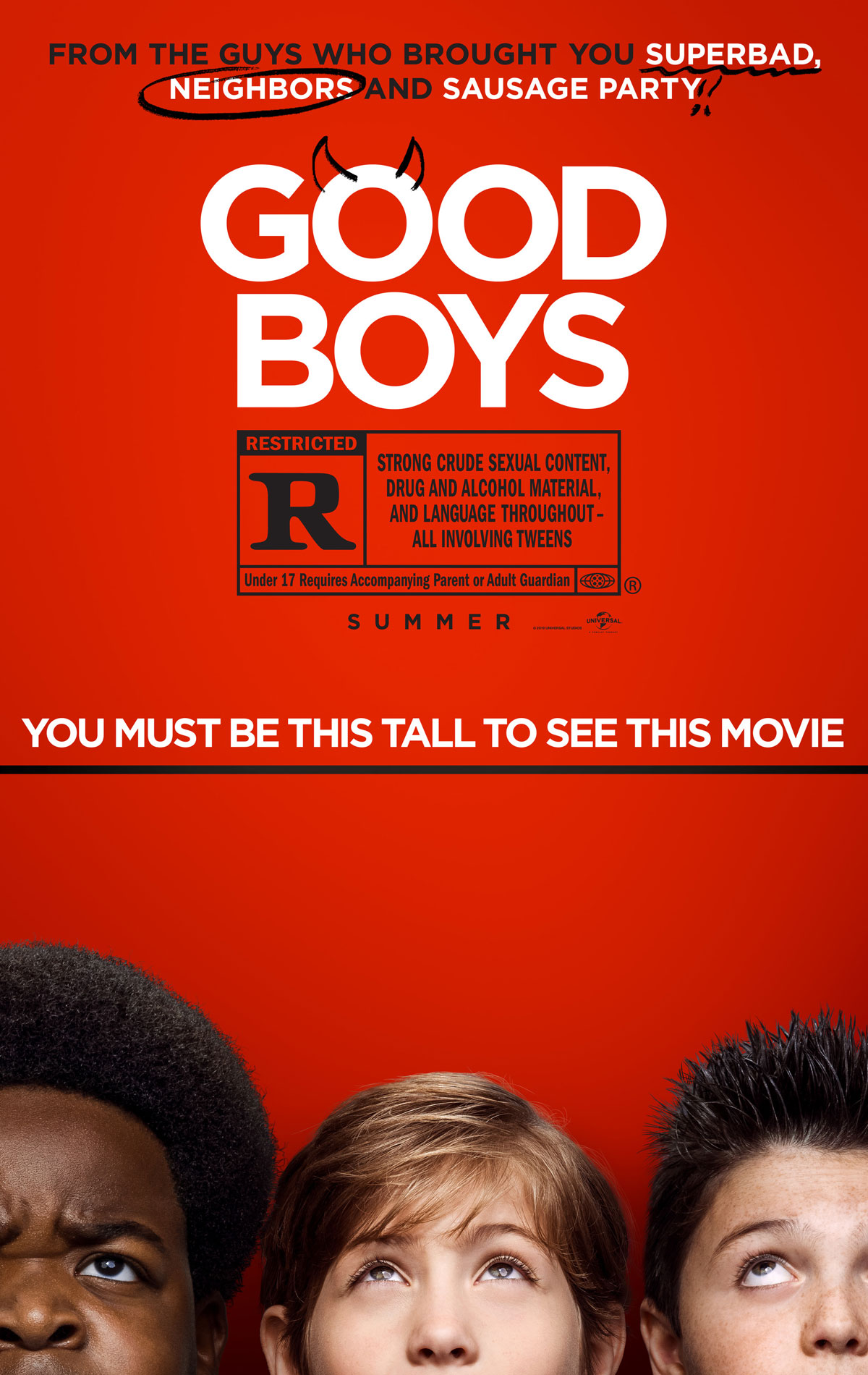 I always feel weird watching movies that star kids. In fact, at my advanced age, I feel strange watching films that star teenagers, college students, young adults and even, sometimes, people in their 30s. It’s a hang-up, I know, but despite my discomfort I continue to do it. Witness the latest, Good Boys. Though, to quote one of the main characters, “We’re not kids, we’re tweens.” So there’s that. Also, this is an R-rated movie, not like iCarly or something. Not that cussing, drug use, sexual content and whatever else goes on in this thing gives me a pass, but it kinda does.

Now, know right off the bat that this film isn’t going to break any ground. Its plot is right out of the default setting on whatever scriptwriting software the writers were using. Not unlike Booksmart and various other young-person’s movies where there is an unbreakable bond between friends that is tested by changing situations, a girl/boy and situational nonsense. We see them hang out, we see what created that bond and then we watch a specific situation spin out of control and how each individual in this pair/trio deals with these setbacks in their own way. They realize their differences, get pissed at each other and break up. But ultimately they come back to that thing that connects them. The end. In fact, you could imagine the pitch for this movies was, “Hey, people loved Superbad. What if we take that exact movie and downshift it a few years and make it with a trio of 12-year-olds?” Film it!

So, if we know this is going to follow the path that countless other coming-of-age comedies in the past have followed, where is the meat of the thing? Well, it’s in the jokes. And how much you like the characters. And I’m happy to say that they found a terrific threesome of kids to play the roles of best friends; Max, Luther and Thor. This is especially important because the plot here is especially weak. Like laughably bad. Here you go… Max has a crush on a girl. He’s invited to a “kissing party,” where he thinks he may get a chance to kiss her. So his friends want to help out, but apparently as 12-year-olds don’t know how to Google stuff. So they fly Max’s dad’s very expensive drone (that he’s not supposed to touch) over the pool of a neighbor girl because they know she kisses her boyfriend a lot. And maybe they’ll learn something. Wackiness ensues. That’s it. Seriously, that’s the plot. Again, that’s pretty much the plot of Booksmart as well, so it’s not alone in its innocuousness.

So. We know where this is going and we know how we’re going to get there, so we have to depend on what we know will ultimately be a bunch of sex and drug humor. Mostly based on the fact the boys are young enough to be innocent and all the young adults and adults around them are the sex and drug-having ones while the boys mostly gleefully and cluelessly move through an adult world of sex toys, MDMA, bong rips, emasculation and consumerism. And it’s this fish-out-of-water scenario that gets laughs over and over again. Because who doesn’t love a fresh-faced twelve-year-old cluelessly trying to use a giant dildo as a weapon on an intruder?

And, again, this is where the talent of the kids comes in. How do they project innocence, but also the intelligence that we know kids can have? How do they not act like little adults, but like actual children? And in doing so not come off as kids acting out the words of an adult writer? Well, the movie and its writers really do find that balance. You can feel the kids trying out the swearing. Their reactions to the adults around them comes off as genuine. And their level of understanding versus their level of smarts rings true. And there’s some really funny shit. They do find a great mixture of physical humor and situational humor. Despite some of the scatalogical and over-use of some of the sexual fetish stuff, the film and humor is smart. The kids are likable and relatable. And they’re bright kids, thoughtful and realistic in their relationships.

Now, once again, the plot is complete nonsense. There is very little that makes any sense in this movie. Like just plain ridiculous shit that would never in a million years happen. And paper-thin as far as narrative goes. Seriously. Looking back, you’d have no other choice but to ask, “I’m not sure how much molly costs, but it can’t possibly be anywhere near that much.” So you kind of have to put that aside and focus on the friendship and the many laughs you have along the way. Kind of like childhood, I guess.