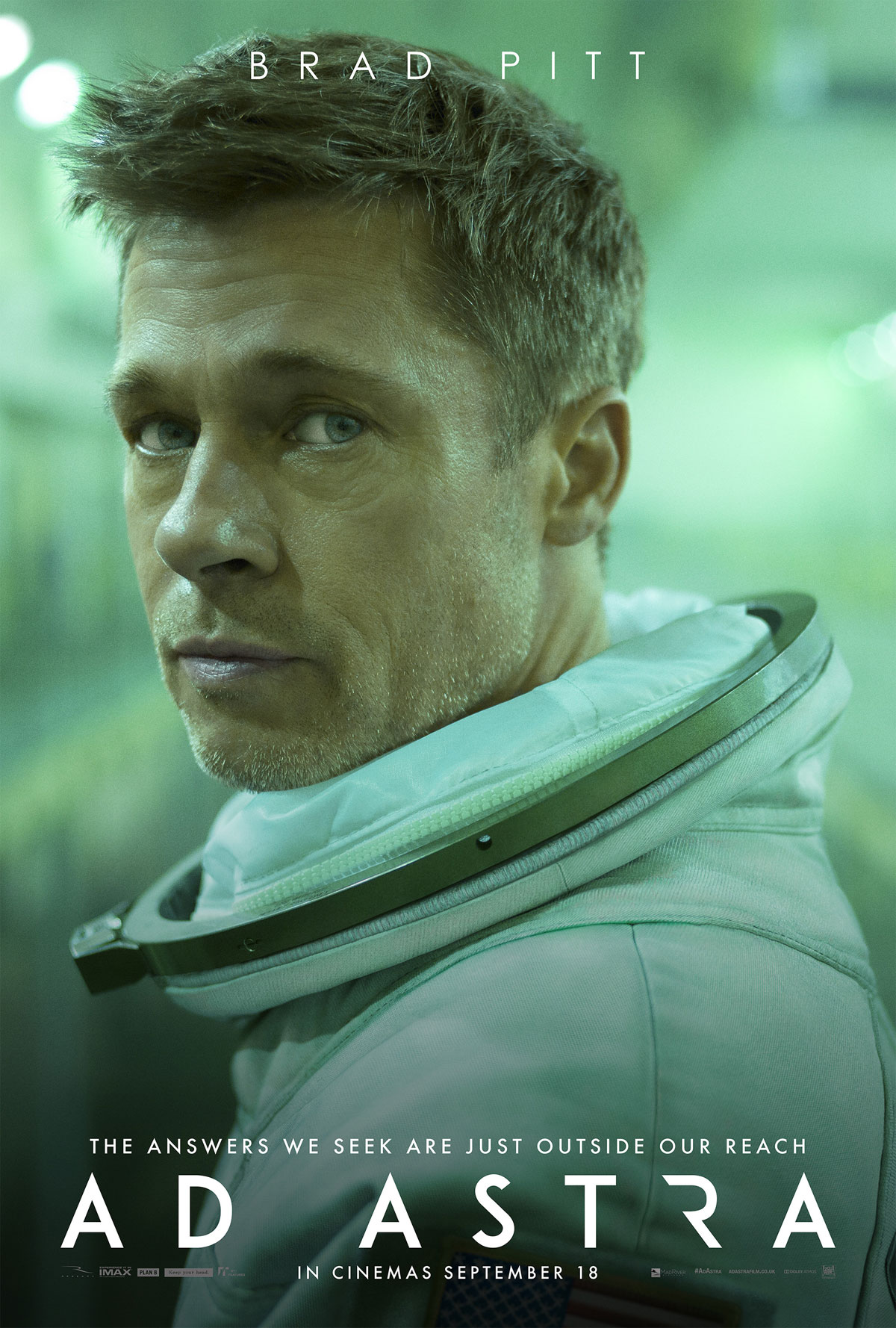 Fathers and sons. Sons and fathers. It’s like a writer’s paradise, that relationship. And so goes Ad Astra, a sci-fi tale that tells the story of that bond — or lack there of — couched in space travel and nonsensical science. And, as you can see from his giant noggin on the poster, it stars Brad Pitt. Not Brad Pitt, the goofy Coen Brothers doofus. Or the manic, cocksure Tarantino Brad Pitt. But the serious, low-key Brad Pitt. The least interesting, most actor-y Brad Pitt who never really makes it out of second gear, and in the process bores the pants off everyone around him. This is not the Brad Pitt we asked for. Nor the Brad Pitt we deserve.

So, Roy McBride (Pitt) is an astronaut. He is the son of ultra-famous astronaut, H. Clifford McBride (Tommy Lee Jones). H. Clifford left on a mission to find intelligent life in the universe back when Roy was nineteen and he and his crew haven’t been heard from in sixteen years and are assumed to be missing and dead. It sounds like he wasn’t such a great father even before abandoning his then teenage son for space. You know, the typical work-before-family thing that makes the father and son trope so prevalent. Thing is, at 50 or whatever Pitt is supposed to be, he has essentially taken the same tack in his life and been a shitty husband to his wife, abandoning her for his work. So she walked.

Anyhow, to make matters worse, these giant electrical surges have been hitting the Earth and breaking shit. Turns out, daddy may be causing these things. He’s alive! So for some asinine reason they need Roy to go to the dark side of the moon to record some messages to “text” to H. Clifford to ask him to stop doing whatever he’s doing. Because Roy couldn’t record those messages on Earth, send them to the people on the moon and they beam them? It’s so contrived. Oh, did I mention that there’s a war going on on the moon? Well, there is! Because it’s an excuse to have a moon buggy race/fight, which looks pretty cool, but is so completely unnecessary it seems laughable. And goes completely unexplained.

I know I’m going deep on the narrative here, but it’s mostly to explain how ridiculous the whole thing is. Needless to say, they get ahold of H. Clifford and it seems his crew isn’t doing so well. In fact, he mighta kinda killed them all. Because Sunshine and like every other horror/sci-fi movie where either a captain, robot or computer suffers some sort of space illness or god complex and decides to off his shipmates. Speaking of killing folks… Roy is ultimately left off the mission to go retrieve his dad because he’s “too close” to it, so he forces his way onto the rocket to Uranus as it’s taking off (which in itself is so silly I can’t even describe) and, whoops, accidentally kills the entire crew when they choke on the vacuum he creates breaking into the ship. One would think this might get him in some trouble should he make it back. But, no, we kind of ignore that later on.

And then there’s some father-son stuff. But not before Roy spends a few months alone on a ship with his thoughts on his way to way outer space. And if you think that’s bad, imagine murdering your crew and then living on a ship with their floating corpses for however long, all while your ship somehow is causing the Earth to crumble. Wait, what? Yeah, the ship that dad is on — a ship that is not like Death Star size, or even Enterprise level, is somehow causing whatever shit is going on on Earth. From Neptune. Yeah, I know, how does that make any sense? It doesn’t. Not one bit. Not in any scientific way. It’s complete nonsense. But, hey, at least it gets us our Pitt/Lee Jones scene we’ve waited for for an hour and forty-five minutes. All this dad stuff is really gonna get worked out. Except it doesn’t. Not one bit. It’s super anti-climatic. Nonsense on nonsense. Makes you think that maybe Tommy had a filming conflict and they only had a day with him before he needed to go film The Fugitive II or something.

So, yes, there is some cool-looking stuff in this movie. The coolest of which is actually right at the beginning of the film. And there’s some potential decent drama between father and son. But the whole sci-fi drama thing gets a little botched, as the filmmakers couldn’t decide to make a family drama or just a neat-looking sci-fi flick. So they kind of trended toward the latter, but forgot the heart. And the science. And the logic to some extent. It kind of tried too hard and not hard enough at the same time. Weird.