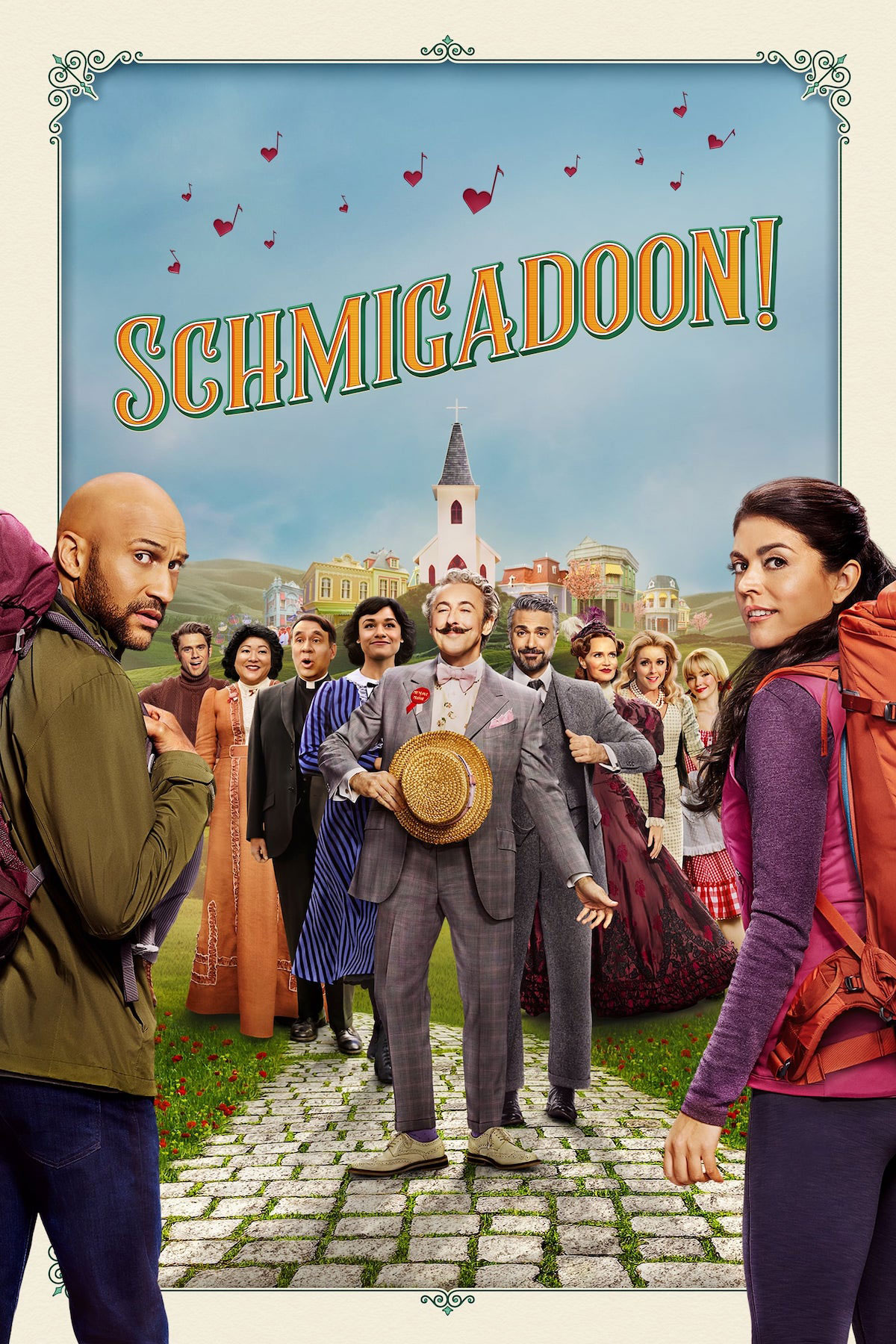 I can’t say I’m much a musical fan. In fact, I might even consider myself a bit of a musical antagonist. I’d call it happy horseshit, but I like horses too much to bring them down to that level. The question here is, does Schmigadoon! like musicals? I mean it is purportedly a musical itself. Or an homage to one. But it also makes fun of them. The absurdity of a chorus of people earnestly singing about their feelings. Their chaste 1940s feelings. It’s all so quaint.

So, why, you ask would I torture myself with a series whose genre is so not my bag? Boredom, maybe? I don’t know. Mostly because I can’t seem to quit Keegan-Michael Key. What can I say; I like the guy. And the whole of the series is directed by Barry Sonnenfeld, which I found both weird and interesting. I thought, “Man, that guy is one of my favorites.” But then I thought about it, looked up his IMDB, and realized he’s actually kind of washed up. The last movie he directed was some horrendous looking thing called Nine Lives in 2016, which I think stars Kevin Spacey as a talking cat! The Barry Sonnenfeld I was thinking of was the awesome cinematographer from the 80s who worked on some of my favorite Coen Brothers movies. He ain’t that guy anymore.

But whatever. It’s not as though we’re looking for Godard here. This is essentially a very long SNL skit, not serious cinema. The plot is just goofy. This couple, Josh (K-MK) and Melissa (Cecily Strong) are both hard-working doctors in NYC. They have a whirlwind romance, which includes lots of fun quips, a common sense of humor and apparently a passion for vending machine snacks. After four years their relationship has grown stale. Melissa feels Josh takes her for granted and he’s just kind of a negative douche. Melissa kills time at night watching musicals on TV. Because, you know, those are always on. To try to light a spark they get out of the city to do this oddball love hike thing, during which they cross a bridge and end up trapped in Schmigadoon. A town that is filled with characters from old Broadway musicals. Why this when only Melissa cares about them? No idea. But it seemingly doesn’t matter.

So, remember how I said I don’t really like musicals? Well, apparently it’s super-helpful to care about, or in some way know about musicals. Because Brigadoon is apparently a musical. And this is based on that. And in the town there are a bunch of characters ripped from other musicals of that era. Easter eggs for the true fans, I guess. Fans of what? Not sure. But the couple is informed that they will be trapped in this idyllic town until they find “true love.” Once accomplished, they’ll be able to re-cross the bridge and get back to whatever it was they were doing prior. Which, apparently wasn’t true love. Just tired love.

The show is relatively plotless from there on out. The two main characters interact with the townspeople, struggle with their relationship and end up ingratiating themselves with those around them. All the while being sung to by choruses of folks dressed like people from the 1800s in ridiculous musical numbers. None of which seem very compelling or overly funny. It’s not as though the show isn’t cute in parts. And Key and Strong are funny and charismatic, but with few exceptions, they shine while others are clearly second-bananas. It’s all very pleasant and toes this weird line where it could get real dark, but with a wink and a nod, we’re brought back into the sunny world. Because, after all, this is a musical, and even when people die there is singing.

This whole endeavor is a little bit of a one-joke experience. The pitch is: What if a big-town couple struggling with a real relationship got stuck in the sunny, unreality of a 1940s Broadway musical? That’s it. So it’s funny at first where they’re basically like, WTF is going on here? But then, as time goes on, the gag is done and we get it. So they have to break their own rules. Because if you were just going to stick with all of the musical characters being those brainless “aw shucks” characters that appear in musicals, there’d be no tension. No nuance. Nothing. So they ever-so-slightly let realism bleed through, only to pull it back when the concept is stretched to its breaking point. What I would have appreciated would have been either them really going for it and stuck to it 100%. Would a character ever do this in a musical? No? Well, then he/she ain’t doing it here. Or — and this is way more interesting — the cynicism, ego and stress of these two people coming into this nirvana infecting the whole place. The astroturf dying. The bright colors dulling. The paint peeling on the perfect houses. Crime. Drought and famine. Death. You get it. That shit would have been fire. (Thank Hipster Jr. for that bit of 2021 vernacular.)

But as it stands, we get some fine acting. And a series that is as innocuous and memorable as Broadway itself. If Broadway had some songs written for a TV show that most people knew would be seen by one Mr. Hipster and like twelve other people who happened to find it on the Apple TV+ menu. A menu I still don’t get. I mean, you’re Apple! What the hell is wrong with you? The UI is absolutely unusable. How is it that I still struggle to find my Apple shows from week to week? Just give me a “my list” and put it at the top of the interface. Sorry, this isn’t about the show. But the way I feel about the user experience is the way I also feel about Schmigadoon!: It’s fine, but it could be so much more with just a little bit of care. Maybe.