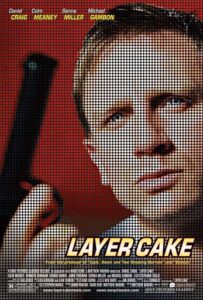 Lock stock and two smoking Snatches. Yeah, you heard me, bloke! This whole Brit gangster movie has become a bloody genre. The nice part is that it’s a genre that doesn’t take itself too seriously–but is just a little too formulaic for its own good.

First, you take a reluctant anti-hero whose main goal in life is to just make it through the day alive. He is most likely a career criminal who is looking to do one last job and make a clean break of it. He’s generally not a horrible person, but has most likely led a life that is less than exemplary, and has caused pain for at least a few people (in this case dealing lots and lots of coke). As with Layer Cake, he spends the movie getting his ass handed to him. He is surrounded by thugs and one suave kingpin type on whose whim his fate lies. There is a peripheral cast of wacky characters, which usually involves an ambiguously gay thug duo who, if they weren’t so dumb, would understand that they were perfect for each other. There’s one crazy dude with no conscious who will just kill at the drop of a hat, and, of course, the femme fatale, who is usually involved with the kingpin dude.

Chicks. They’re always our hero’s undoing. While I could be talking about any number of movies here, including the aforementioned and something like Sexy Beast or even The Transporter, these principals and plot points could equally be applied to Layer Cake. Often there is a bit of humor thrown in, albeit oddball British humor (which is what really differentiates these films from their counterparts). Sure, you have stuff like Get Shorty, The Whole Nine Yards, Lucky Number Slevin and even Miller’s Crossing, but they are missing that particular Brit thing that makes a movie like Layer Cake so very British. Maybe it’s the addition of all those Guy Ritchie crazy zoom shots and voice-over flashbacks (which I’m a total sucker for), but the thing just has characters above and beyond the American gangster twist comedy.

That’s not to say that the plot wasn’t a little muddled. And it is fun watching the future James Bond get his ass kicked. He’s kind of an odd looking guy–it’s almost as if they’ve colorized his eyeballs blue. I’m not sure how that’s all going to work out. Maybe if he had asked the producers to actually give his character a name, he wouldn’t have blended into the woodwork as much as he did. In fact, the lead character, in his controlled actions, was one of the most vanilla and least interesting. This is actually common for these films as well, as the lead kind of flies under the radar, and occasionally takes a beating, while all the loud-mouths and lunatics swirl around him.

I’m not sure if it’s the accents or the fact that each version of this kind of film needs to add more twists and turns than the last (and not repeat any), but there were times where I got a little lost about who was screwing whom and why. At the end it all came together, and thankfully ended in a non-Hollywood kind of way. The DVD showed a couple alternative endings, but they definitely picked the right one. Anyhow this is like one of the worst reviews I’ve ever written, but rest assured that I actually did like it.