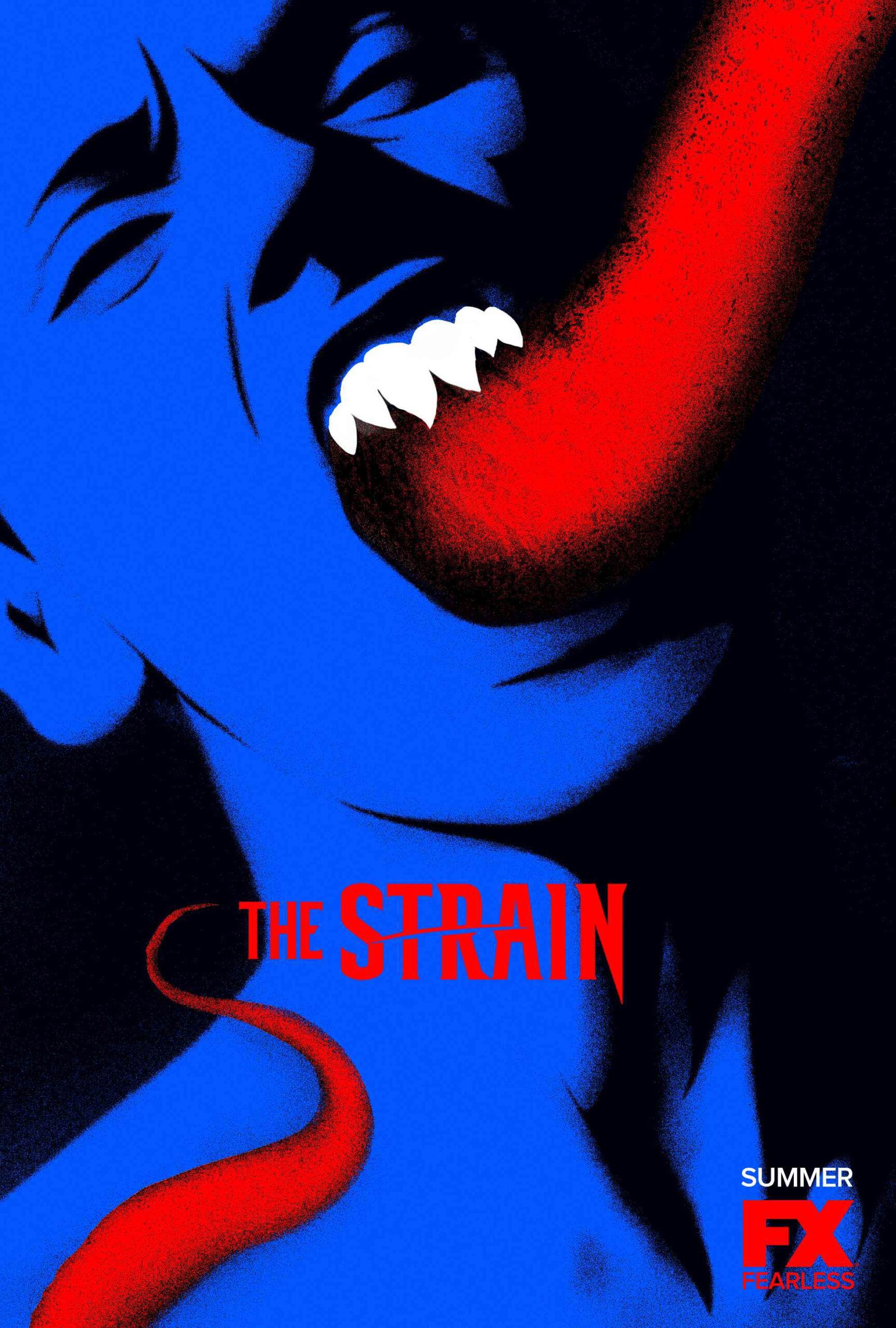 November 9, 2015
[This here contains spoilers. But who cares, really?]

The Strain has been, from the very beginning, a serious test of my mental fortitude and ability to not change the fucking channel out of pure disgust. And not because there are weird vampiric zombie things with giant proboscises that shoot out of their mouths, but disgust with the fact I waste an hour a week watching a show that even the creators of the show think is a big fucking joke. I am especially disgusted, as a long-time resident of the Upper East Side of Manhattan, that they constantly refer to random-ass neighborhoods as if they’re sovereign states. “The Upper East Side will never stand for this!” is a refrain heard more than once as the citizens of said neighborhood are invaded by a crusading Staten Island councilwoman (played by Manhattan-native Samantha Mathis, whose Staten Island accent comes and goes and morphs from scene to scene in such a distracting way as to be laughable). And before invading the UES, she apparently rolled over Red Hook, Brooklyn in a Hitleresque power grab. Red Hook is, apparently, where the rest of the United States is supposed to think the heart of New York beats. Why there? Who the hell knows? To that point, this show is supposed to be filmed in NYC. The city itself, as the tirade above indicates, plays a huge role in the plot and flavor of this thing, but those of us who live in the area can attest, not a single building, street, group of people or anything looks remotely like New York City. You know what it looks like? Canada. And unashamedly so. It’s actually more horrifying than the zombie vampires who have taken over the city. Because, shit, Toronto really looks like the crappy backside of a backlot on a wharf in some sad-sack section of nowheresville.

The other horrifying thing that made its way from season one to season two was Corey Stoll’s awful toupee. It was like an alien made of felt and cat hair. It was like Rip Taylor bad. Yet they kept it around as this distracting thing that you almost want one of the vampires to snatch off his damn head and kill. Welp, season two brought the dignity back to Corey’s scalp, as they shaved the thing in this ritualistic way that left all his fellow characters shocked — but, of course, we were all in on the joke and were super-glad to see the thing go. So I thought once the hair was gone that the show would shift into another gear and we’d be sent on a thrill ride through the mean streets of Toronto! But, no, we were treated to a love triangle between a horny bi-sexual, an asshole lesbian and an inexplicably Russian exterminator dude. And an old holocaust survivor looking for an old book while his old Nazi nemesis also searches for the same book only to come to blows in a cut-throat auction. An auction! I shit you not. The two of them stand there bidding for this stupid book in a church with some gang bangers, with whomever bids one dollar more than the other getting the book — and this is the big showdown that built up all season. And then the Nazi, who is also a vampire, loses the bid because his benefactor pulls his money from the bank during the bidding (leaving him with zero dollars). And as the thing is set up, technically the old Jew only has to pay $1 for the book, but somehow his several-hundred-million-dollar bid stands, despite the other guy having zero dollars. It, like most of the show, makes zero sense.

The show continues on as if the guys writing and directing it don’t think anyone is watching. There is that little care put into it. There’s an annoying son on the show. Because there’s always an annoying son on the show (see The Walking Dead). But in this case even the show’s makers know he’s annoying, but rather than kill him off, they invent some grandparents that are never mentioned until they magically show up (on the phone) to claim him and, God willing, remove him from the main plotline so we don’t have to suffer through his whining anymore. Oh, did I mention that despite the largest city in America being overrun with vampire zombies and the whole area falling into chaos, that the rest of the US seems to be totally oblivious to the fact the world is going to hell? Corey Stoll takes a trip to DC and it’s as if nothing is going on. They’re going about their day, eating lunch at swanky restaurants, going on dates, Tweeting. Whatever. As if NYC falling off the face of the Earth wouldn’t send shockwaves throughout the US, let alone the world. Making this show feel even less connected and more like Toronto than it even is.

Did I mention vampire zombies? Cuz, you know, everyone loves vampires. And zombies! So let’s just kind of combine the two and have the worst of both. Granted, I am a fan of neither, really, but at least if I’m going to do vampires, let’s try to get some that are more cunning than these absolute lunkheads. I know, I know, I’m being unfair to our sun-challenged brethren, but what am I to do when I have to watch these creatures who apparently have some tie to The Master, who is some sort of Nazi-loving spook from back in the days when books had really heavy bindings and controlling an army of infected New Yorkers was a thing. There just doesn’t seem to be any end game for this Master guy. Yay, I control Red Hook, Brooklyn! Now I can launch a land attack and take over the Brooklyn IKEA and my sea brigade can invade Governors Island! And why the hell is The Master hanging out in Brooklyn anyway? Is he Master Hipster or perhaps he’s waiting for the big sale at the vintage big & tall man’s shop in Bay Ridge? Whatever the case, the scale of this thing and the reaction to what seems to be happening to the city is muted in a way that makes the whole thing feel like a giant waste of time.

I thought this show got canceled mid-way through season one, but apparently I was in the news blackout that has apparently hit the rest of the world as blood-sucking creatures take over our country’s most populous city. This series sits in its own cocoon inside its own bubble, and while others go to the gym and write poetry I sit watching this garbage as my brain turns to mush.