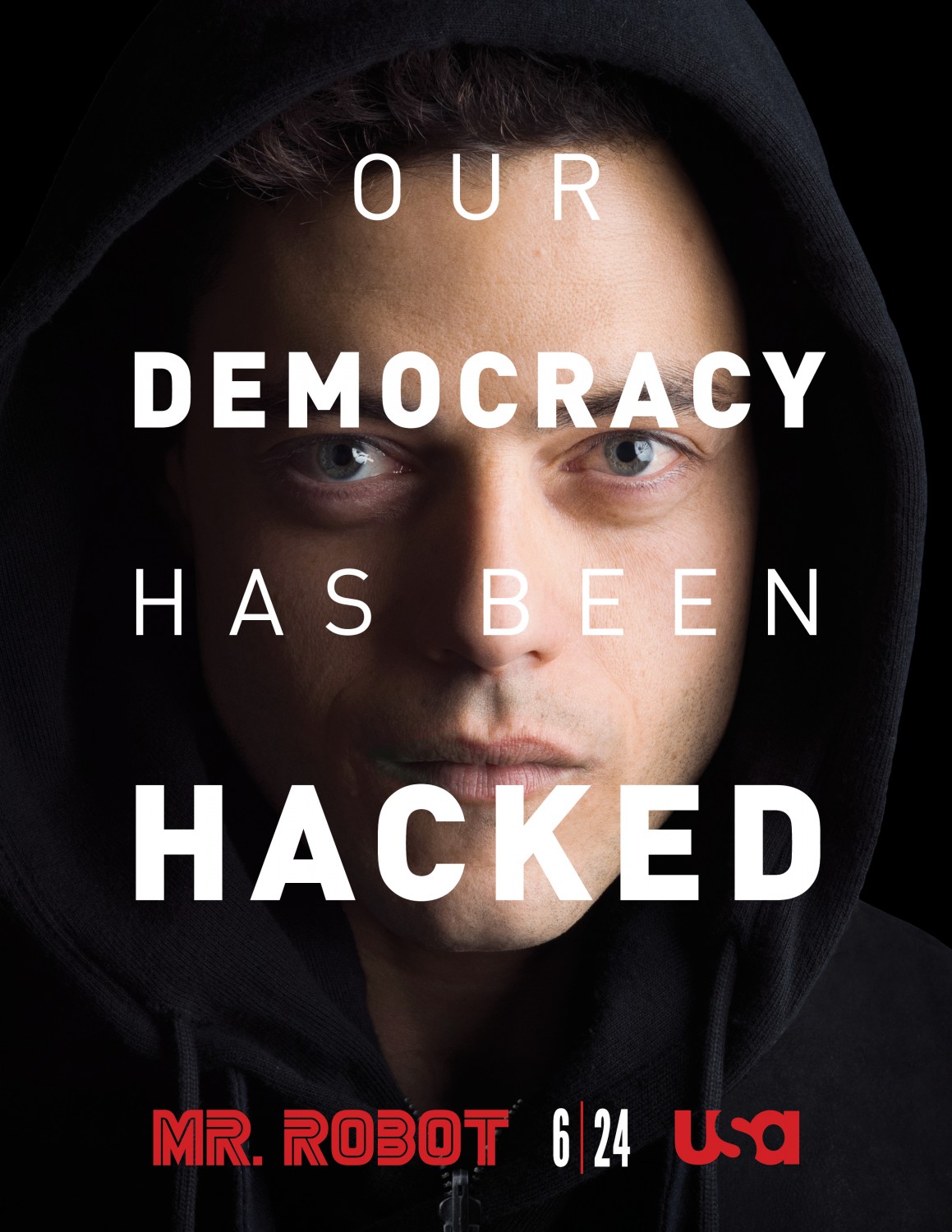 There is probably no other movie I reference more on this site than Fight Club. It’s a movie — for better or for worse — that I feel connected to. Now, I understand from the Internet Machine that the film has been appropriated by bro culture because, like everything bro, they’ve completely missed the point. So now we have Mr. Robot, which has a very, very heavy Fight Club vail over it (including wrapping a seminal reveal in a piano instrumental of the Pixies‘ “Where Is My Mind”), but has mixed in hacking (aka nerd stuff) rather than punching, which will hopefully keep it — even historically — from falling into the bro hole.

From minute one I loved this series. The look of it, all cold and askew, but genuinely New York, gave it a quality unlike most anything I’d seen on TV. Yes, there was some Fincherness to it, but if you’re going to make what amounts to an ode to a film of his, you might as well take from his cannon, including reminders of The Game, Se7en and even Panic Room and Zodiac. But don’t get me wrong, this isn’t a straight rip by any means. Sure, it has the anti-consumerism underpinnings of Fight Club, and a character that is real only to the schizophrenic who embodies him, but this isn’t the lonely tale that one is. Sure, the lead character, Elliot (Malek) is lonely and a loner, but he is materially connected to life by those he loves and those who love him. Even if he doesn’t know it.

That all said, I was worried when I first found out this thing was on USA. It just screamed hokey to me. And when the show started off with Elliot busting a kiddie pornographer with his hacking in the first episode, I could see the lame procedural forming around it and thought my fears about of the USA lame stink being all over it were being verified. But that turned out to be a red herring. It turned not at all into a weekly procedural (Elliot tracks down a bad guy, hacks his life, makes a speech to his face and then the cops show up and arrest the dude.) That version of the show would have been not worth the time. But this was pretty much the first and last time we see Elliot hack a complete stranger just to uncover injustice. Perhaps this was what he was doing on a weekly basis before he got into the whole F Society giant financial hack that freed the world from debt. Maybe not.

One more thing to appreciate about the show is how it treats its audience. It assumes we’re not morons. It assumes we are intellectually curious and don’t need everything telegraphed, recapped and prompted. Granted, it seems that’s the direction most “serious” television is moving these days, but this one feels particularly smart because we are asked to absorb quite a lot. That said, Sam Esmail does an excellent job of creating plotting that is relatively easy to follow despite the technical jargon, mental illness and sometimes — especially in the “dream” episode — blurred lines between reality and the imagined. It’s not like when I watch Game of Thrones and have to pause every three minutes to ask my wife, “Now, Who the fuck is that guy?”

I remember being surprised that so many people got into Breaking Bad. I mean, it was a weird show about a meth-dealing math teacher in a state most have never heard of, let alone been to. But with time and distance, it becomes more obvious that beyond the violence and the drugs, you have a family story. A family in peril. And there isn’t anything bigger for the viewing public than that, as evidenced by their love for The Kardashians and all those Housewife shows and things like Parenthood and whatnot. And when I look now at this show and think to myself that it’s too niche, too grounded in technology and social messages that your average Two and a Half Men audience isn’t in tune with, I realize that at its heart it is a family drama surrounded by all of this and with a dash of trippy intrigue for the geek in us all. And I imagine that this is going to be a huge streaming event for all sorts of people prior to season two. And I anticipate that there will be a ton of fanfare when it debuts. That said, listening to interviews with series creator, Esmail, I think viewers are in for a surprise as we are clearly in for a backward time jump. How far back I’m not sure, but we’re certainly going to fill in Elliot’s backstory (which we’ve seen glimpses of) and he’ll show us when he had his “break” and how he started F Society and became the guy he became. They’re clearly in love with Christian Slater based on the interviews I’ve heard and delving into backstory will give him an opportunity for some serious screentime. I think — and this is just a stupid theory — that Elliot’s vision of his father as Christian Slater is a delusion in itself, and that he’s actually projecting the actual Christian Slater (the cool actor from his young childhood) onto his real father. That would be one of the more awesomely meta things ever. So I just pray it’s true. Though I’m sure it’s not.

There is a lot of good TV these days. Like a LOT. It’s amazing to me that USA has thrown its hat in the ring with such a strong and game-changing entry. I almost wish it had been on a different network so I don’t have to now split my brain yet again and assume that the next new USA show might have some legitimacy. That aside, I’m really glad Esmail decided to turn his film idea into this series and know that this will be the new shit that everyone will be talking about in 2016.