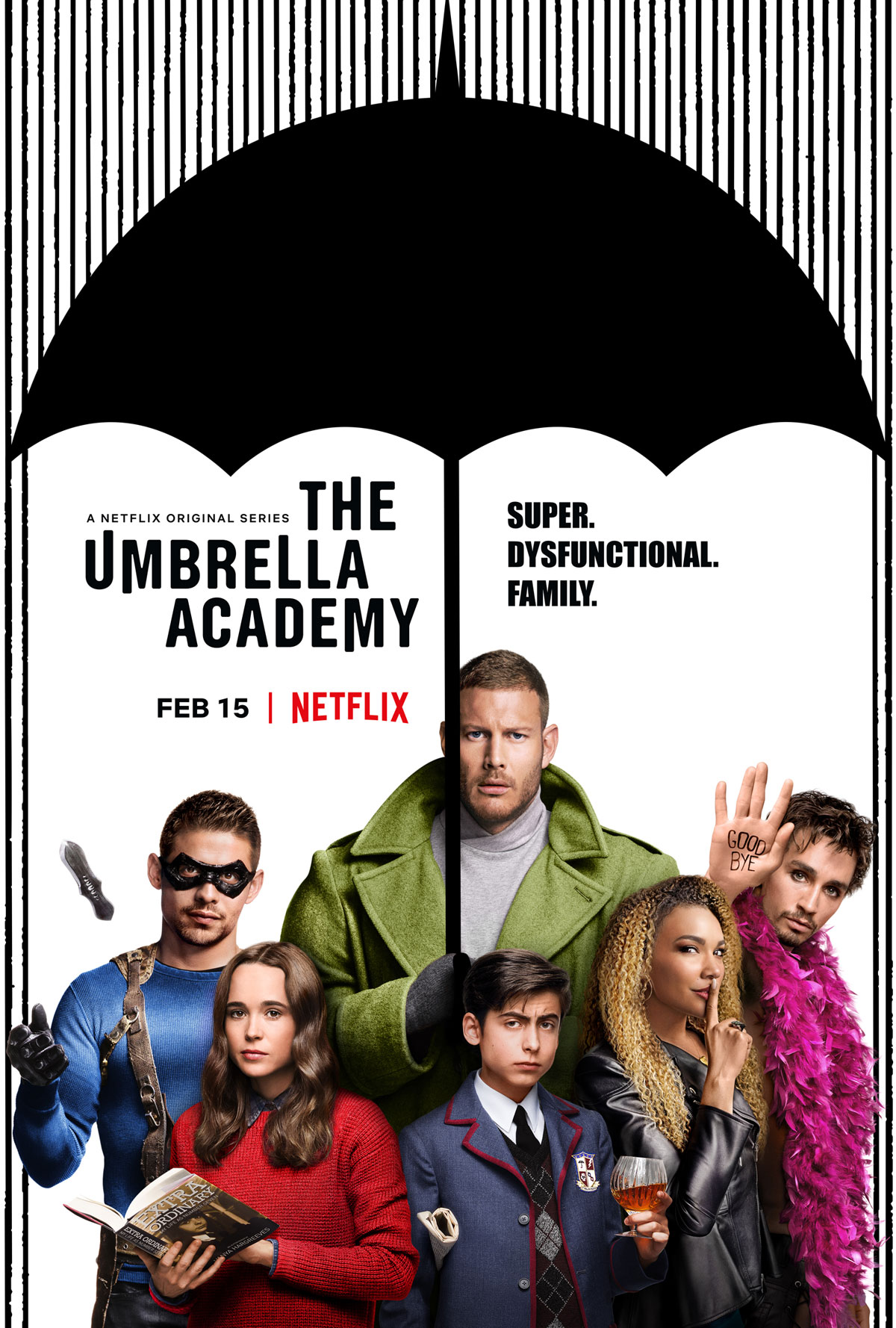 There is very little I won’t do for Hipster Jr. Jr. Including watching a superhero show based on a comic book written by the lead singer of My Chemical Romance. After all, it stars one of the main characters from the “classic” Nickelodeon quadruplets show, Nicky, Ricky, Dicky & Dawn, which I’ve been subjected to many times over the past few years. I think he played Nicky, the sardonic quad. Hipster Jr. Jr. tends to dig Marvel movies and YouTube videos of cats licking their butts and people running into poles and stuff, so I figured that this was a safe bet for semi-family-friendly viewing. And, besides some “shits” and a few violent images, it’s all pretty innocent. Like no nudity, graphic sex or even any f-bombs. So I get to check that “I’m a good parent” box and also, maybe enjoy a goofy series about a family of fucked up people with powers.

I’ll start by saying that I’m not a superhero movie or TV guy. And I was definitely not a comic book guy. I definitely listen to early aughts, fourth-wave emo as a super-guilty pleasure, so I’m kind of enamored with the fact that Gerard Way, while helming one of those bands, also wrote a comic that got turned into a series on this primo streaming channel. So, this show is definitely me stepping out of my genre lane. But what is life if it isn’t taking chances and experiencing new things?

What I have done as part of my father-daughter bonding with Hipster Jr. Jr. is go through almost the whole X-Men filmed oeuvre. And, right off the bat, the similarity between that series about a non-biologically related family of young misfits is pretty clearly similar to this one. Or this one is clearly similar to that one. Though this one is kind of updated for our Gen-X time, incorporating darker humor, sarcasm and some grittier themes  — although not so gritty that it’s off-putting for a younger audience.

The main narrative here is pretty basic. In 1989, 43 women around the world give birth simultaneously despite not being pregnant. This is never explained. They intro it at the beginning of the series, but never really come back to it. Perhaps the origin of this phenomena will be explored in season two? Anyhow, this eccentric English dude, Sir Reginald Hargreeves, goes around and offers money to all the women to adopt their children, eventually ending up with seven of them. He raises them in a mansion in what is supposed to be NYC, but is actually Toronto, I believe. In raising them, he exploits the weird powers that each has, forming a little group of superheroes dubbed The Umbrella Academy. In a flashback we see the genesis of this name and most likely where he made all of his money, but even that is shrouded in a little bit of mystery.

Fast forward to 2019 and all of our living Umbrella Academy kids are screwed-up adults, demented for the most part by a cold, unfeeling father who pushed them to explore their powers and not necessarily live life as children. There are some meta touches, as we see throughout the series that the Umbrella Academy and their superheroness were memorialized in comic books, action figures and other such things. Despite this, it seems in their current incarnations as 30 year olds, they have all fallen on hard times in their own ways, including the aforementioned Nicky, who had been traveling and emerged in 2019 as a 13 year old.

The series looks good. The characters are well developed and the world they inhabit is pretty cool. It’s definitely not our world, however. Whether it’s an alternative reality or a parallel universe or whatever, this is definitely not the 2019 NYC that it purports to be. First, there are no cell phones. There are no computers. The cars all seem to be from the 1980s, and the geography of the area is completely altered. I suppose that makes it easier for the creators to bend things to their narrative, but it’s also fascinating to see how they will twist things next. This is also a series built for multiple seasons. They do put a time clock on season one, as our heroes battle time-traveling assassins to stop an armageddon that only they know is coming. But with the whole time travel thing, and the fact that there are still another 36 children with potential powers out there, we have endless amount of story to tell. Not to mention this season ends on a cliff hanger.

Did I mention one of the time-traveling assassins is Mary J. Blige? And that she’s actually pretty darn good? Weird, right? Anyhow, this may not be my typical watch, but after sitting through these ten episodes, I’m actually looking forward to season two. It’s no Sopranos or Game of Thrones or anything, but it’s certainly unique enough to hold my attention and makes me not regret choosing it to watch with my baby.