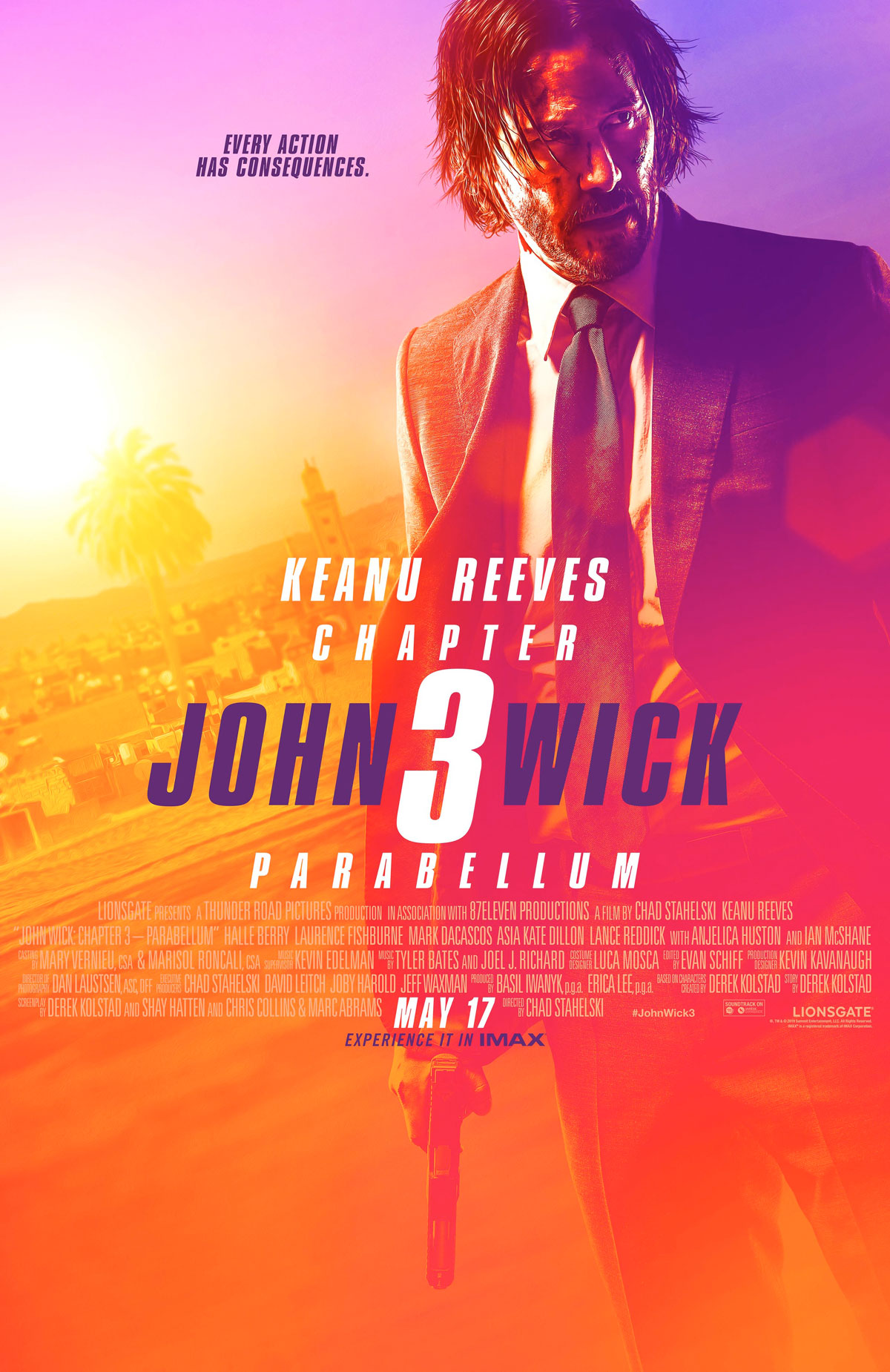 The Keanussance is real. Ok, it’s not real, real, but a guy who was once an acting school punchline has come through the other side as a bonafide action star. Or, more importantly, a real mensch. Everyone loves the guy. So, it’s with great affection that we watch him in John Wick as a professional assassin kill the fuck out of dudes in the most grotesque and gratuitous way since… Well, maybe since forever. I didn’t count the bodies, but suffice it to say that it’s around one hundred. It’s Commando-level killing.

John Wick has been through a lot. Dudes killed his dog. Dudes stole his car. Dudes shot him, stabbed him and in John Wick: Chapter 2 marked him for termination. And man if it ain’t a bitch being an assassin in a world full of assassins, all of whom are just about to be let loose to come assassinate you for a seven-million-dollar prize or so. And this where John Wick: Chapter 3 – Parabellum starts. Literally minutes after the last film, as John Wick runs through NYC trying to find somewhere to shelter before the world drops on his head.

It’s a great setup for a film. This dark, alt universe where there are murderous shitbags on every corner. Where murder for hire is both a way of life and also highly regulated by this shadowy organization called The High Table. This funny mixture of old-world, Samurai-like order and honor and the griminess of street-level thuggery. The funny mash-up of 50s, nineties and super-modern tech that doesn’t exist in a single timeline in our world, but serves to make a super-stylized version of Manhattan that is amped up to ten.

Now, let’s not get it twisted. Keanu hasn’t all of a sudden become an award-winning actor. He was awesome as stoner philosopher, One-d-Tod, in Parenthood and a charming bro hero in Speed. But for every movie like that, you have a Bram Stoker’s Dracula or Much Ado About Nothing where they ask him to do an accent, talk a bunch and… act. So they found, after putting him in The Matrix, that he’s actually not bad when you mostly have him be the strong, silent type. Mostly glaring, walking, running and shooting. Maybe the occasional one-liner. Leave the talking to others.

And while they really hit on this in the John Wick series, they really leaned on his physicality in John Wick: Chapter 3 and made him do almost no emoting. He didn’t have to cry over his dead puppy. Or do as much sad glaring at his dead wife’s photo. Or even get super-angry about his missing automobile. Instead, he spends the entire film running and hiding and shooting and jumping while others, like Laurence Fishburne and Ian McShane do most of the talking. And that’s probably best for all of us. Because they are good actors and, well, Keanu just looks amazing!

If you are opposed to violence, do not come within ten feet of this series. After all, there are hundreds of people coming to kill John and he pretty much dispatches them all. Him and his bullet-proof suit and his cache of small, medium and large weapons. He kills dudes with swords and knives and by throwing them from heights. He gets run over, shot, stabbed and also thrown from heights. And at times even I asked if this level of violence is ok. I mean it’s comic book/video game violence to some extent, but it’s about as gratuitous as it gets. Shit, he kills a dude with a book by shoving it in his mouth. But if you just take it that way, it’s about as fun as modern action films get.

It is amazing that Keanu has starred in two of the more iconic action series decades apart. Both of which also involve Fishburne. The choice of him in this series can’t be a coincidence after the all-time classic pairing of him and Keanu as Neo and Morpheus in The Matrix. It’s this whole meta thing that really brings another layer to the story. There are also echoes of other films. Including a straight-up homage to the Bruce Lee / Kareem Abdul-Jabar fight in The Game of Death when Keanu has to fight an assassin played by 7’4″ basketball player, Boban Marjanović. It’s a pretty excellent scene.

And that’s the thing with this movie. It’s very cool. It’s fun. It looks really unique. It doesn’t live in any sort of reality whatsoever. It’s a very karate movie kind of setup, where we basically move from fight scene to fight scene with some story in between. Lore building, cool-looking locations and lots and lots of shattering glass. There are times where Keanu’s 55-year-old knees look like maybe they’re a little achey, but there are some very original fight scenes, including what amounts to a sword fight on motorcycles. In a lot of ways, the movie is a throw-back to when it was ok for violent men to be sympathetic heroes. And, honestly, I think it’s only because it’s Keanu that it’s ok for America to love them some John Wick.