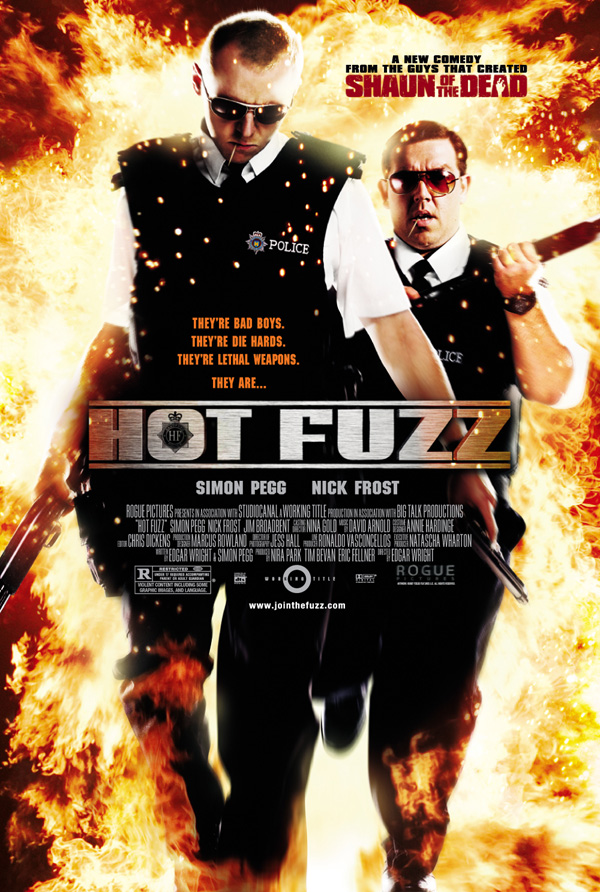 I have to admit I had really high hopes for this movie. I thought Shaun of the Dead was brilliant, and I had heard only glowing things about this follow-up. I thought I’d be barfing with laughter, and absolutely loving the wacky relationship between Simon Pegg and Nick Frost, much as I did in their zombie debut. It seems I was led astray.

Sure, I giggled a few times at the slapstick stuff, and there were a couple laughs here and there at the expense of silly Brits, but overall the funniness was subdued, as the action parody kind of took over the film. Of course parody is always a dangerous thing. Well, parody, or semi-homage, I guess. At what point does a film stop being parody, and become part of the genre itself? With Shaun of the Dead, the line was clear. With this one, it was clear what they were trying to accomplish by placing the typical shoot-em-up over-the-top buddy action film (Bad Boys II, etc.) in a sleepy English hamlet rather than your typical large city like Miami, L.A. or New York.

It’s funny that the bad guy is a teenage shoplifter instead of some hardened criminal robbing a bank with automatic pistols and body armor. It’s funny that our big town cop, Simon Pegg, has gone from busting drug runners to arresting drunk high schoolers and runaway swans. Once that joke kind of runs its course in the first twenty minutes, we’re left with the feeling of “what’s next?” So the thing kind of veers into Stepford Wives territory. It turns into one of those outsider in a town that seems just a little too perfect scenarios–like a Lost Boys thing. In doing this, I feel like the movie loses its way a bit. In other words, it feels like they set out in one direction; to make a parody of all those Bruckheimer cop buddy movies, and it turned into something just kind of silly.

Granted, there is a lot of self-referential stuff in there, as Nick Frost’s bumbling cop character is obsessed with Bad Boys II and Point Break and even screens them at one point for the by-the-rules Pegg. Despite all this, people do seem to like the film. I certainly didn’t hate it, but I’m giving it a low score because of broken promises and general disappointment. All the pieces were there to knock this one out of the park, but instead the thing just felt flat and overly long. Next time, dudes, next time.