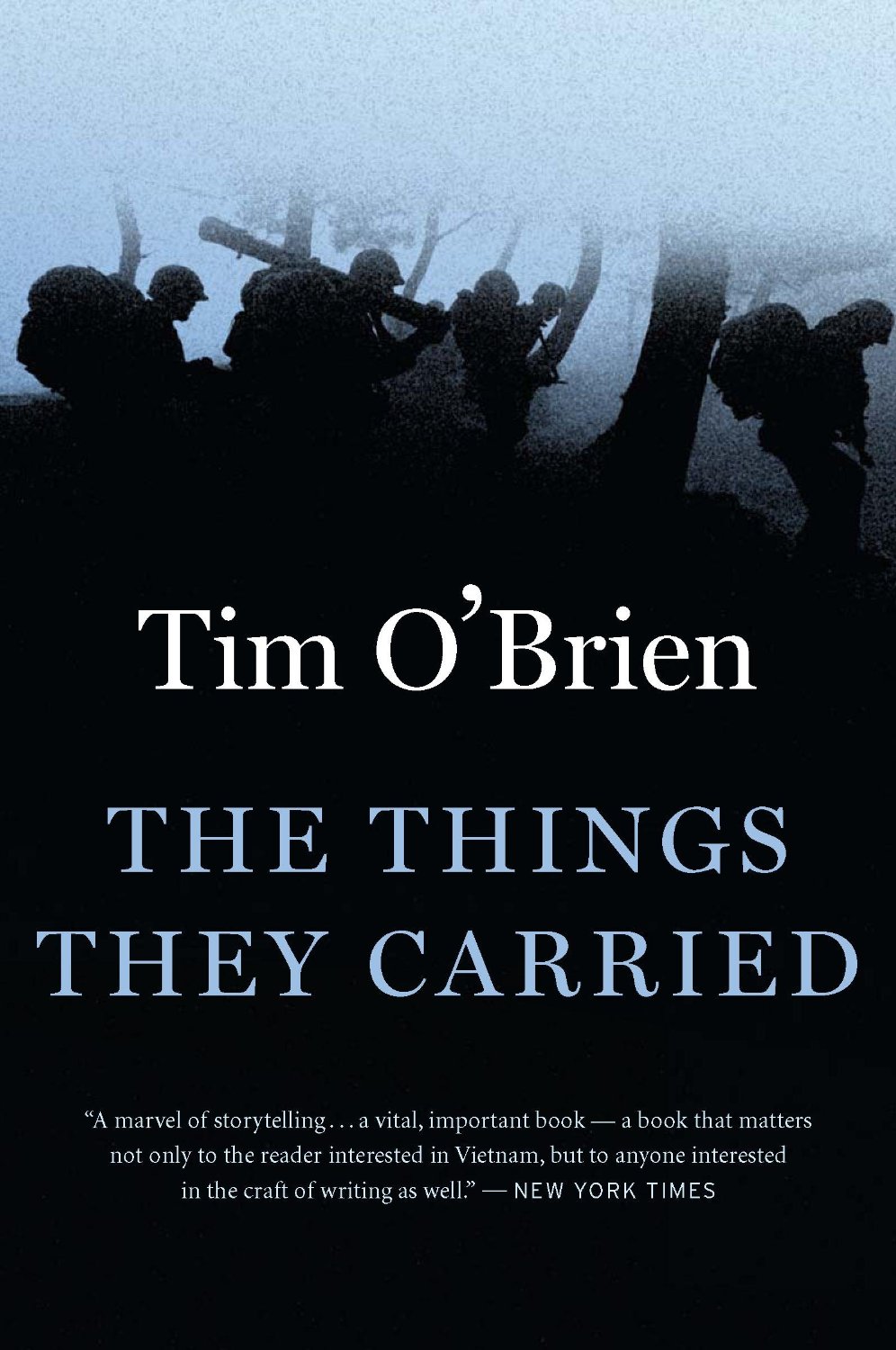 The Things They Carried

Having been born during the tail end of the Vietnam “conflict,” there are certainly elements that have touched my life—a life that almost wasn’t (or potentially) after my dad was drafted. He managed to avoid going after being excused for medical reasons, but there were certainly pieces of it everywhere. My mom worked as a social worker in Harlem and Brooklyn, mostly bringing recent vets their disability checks, and my folks actually met at Kent State, where the National Guard shot and killed student demonstrators. Having no actual recollection of the war first-hand, it’s hard for me to imagine how enraging it must have been to watch thousands of young men coming home in body bags and/or scarred by what they’d seen all because of politics. Those were different times than today, of course, but obviously seeing television clips and documentaries, I can see the horror involved.

I read O’Brien’s Going After Cacciato some years ago, and its fantastical/metaphorical approach to the war made for not only an educational read, but also something transcendent of war. It was something spiritual and Zen and a really really good book. It took me all of these years to get to read this one. It seemed appropriate given the current Iraq situation, and I honestly found it used and it just jumped out at me. This book is certainly a lot more straightforward in its approach to war. It’s an odd amalgamation of autobiographical (O’Brien fought in Vietnam) and fictional accounts of an Army company in Vietnam. The book claims that all the stories are pure fiction, but that seems unlikely. In fact wrapped up in the connected short stories is the overarching theme of stories versus war-stories and what is reality and how sometimes the made up stories are somehow more real than the true stories, as they sum up the experience, while the true ones are just stories.

To call this thing a novel would be a stretch, as it’s really a grouping of stories, all interconnected, along with some commentary from O’Brien about some of the stories that he writes, although even that commentary is fiction about fictional stories—I think. Whatever the case, the tales he tells are gripping and powerful, sometimes funny, but almost always poignant in some way. O’Brien, if he were a pitcher, would be a Greg Maddux type, picking his corners and hitting his spots, never overwhelming with big words or sentimentality. His prose doesn’t swell and build, it just kind of goes along in a very matter-of-fact kind of way that is extremely refreshing. He definitely has a style to his writing, repeating quirks that give it a true signature. His writing, oddly enough, reminds me of Kurt Vonnegut a little bit. It’s breezy and really carries you along, but has a true style to it, these little repeating quirks, that don’t get in the way of the story, but give it some real character and depth that a straight-ahead narrative wouldn’t. O’Brien describes the horror of war in his writing the way the soldiers probably dealt with it on a daily basis, taking it all in and dismissing it for fear that letting it in would traumatize them to the point that they couldn’t move on. The most memorable piece for me in the book was when he, O’Brien—either fictionally or non-fictionally—received his draft notice. He was a guy working in a hog rendering facility in his hometown in Minnesota for the summer before heading off to grad school at Harvard. He got the letter and felt absolutely slighted and scared and unable to explain to anyone in his small, conservative town that he wasn’t the kind of guy who fired guns and crawled around the mud and got shot and dies in a rice paddy. All his fear and all his dread fall on deaf ears, so he heads up to Canada. He stops right before the border at a lodge to ponder his future and his decision. This is a choice that determined his future, his parents standing in their community (deserting was tantamount to treason in their town) and the standing of right and wrong. He spends a while contemplating what to do, and ultimately makes a decision. As with all the other stories in the book, this one comes back a few stories later when he is looking back on the choice he did make and whether he felt in the long run that it was the correct one. It’s his conclusion that carries the most weight, and it’s a conclusion—and what he perceives to be the cowardice behind it—that is the most surprising and eye-opening thing in the whole book. So much of what is taught about the Vietnam war focuses on the political struggles back in the US, but this should be required text for any class teaching about the Vietnam war to show the internal struggle and conflict that went on within the soldiers themselves.