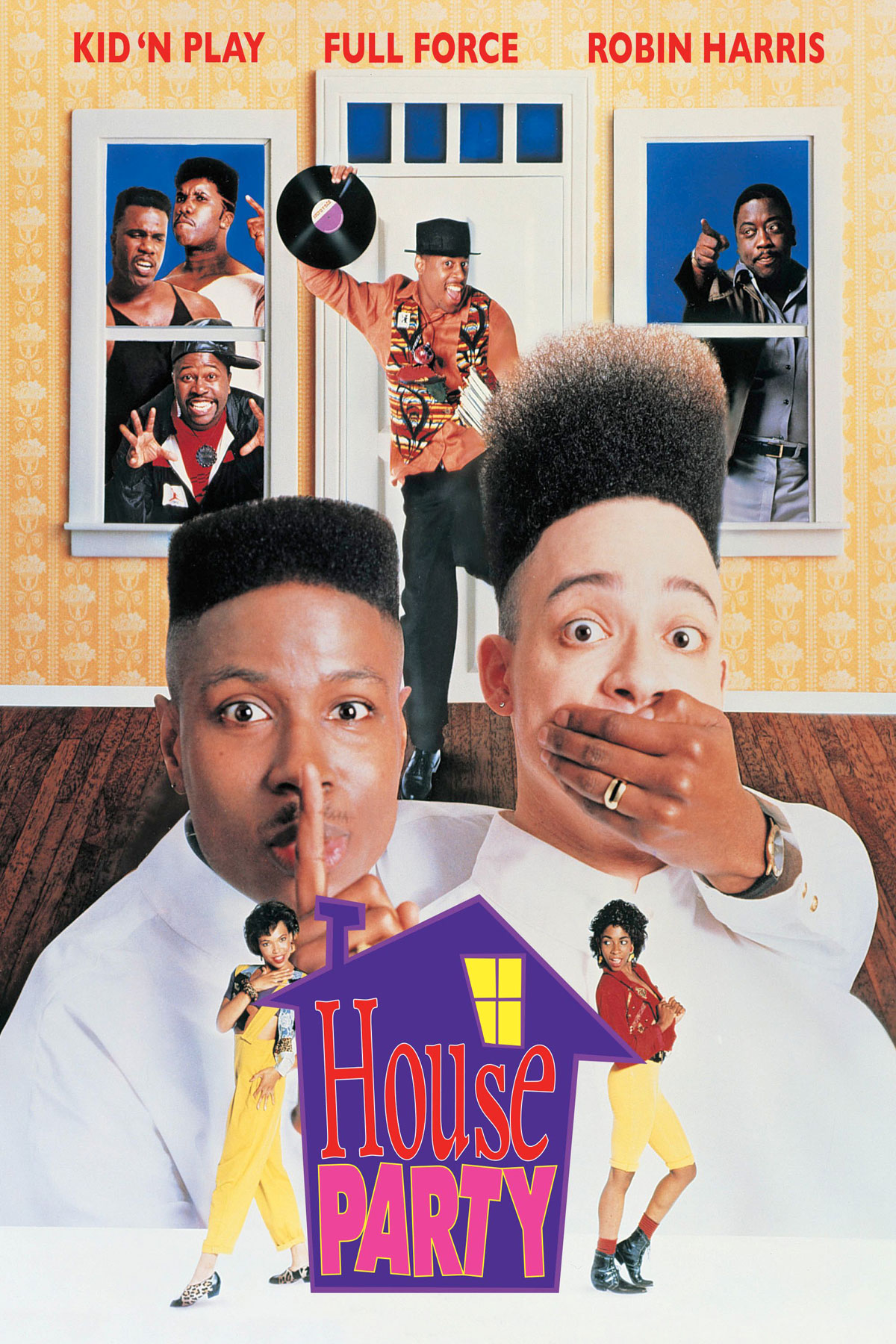 I have no idea why, but I saw House Party in the theater twice back in 1990. I was an impressionable high schooler and for some reason thought of myself as quite the big dancer. Or big-dancer? Whatever, I was into the running man and the Kid ‘n Play and all that. And this movie just spoke to me in a way that I couldn’t explain. Mainly that it was fun. And involved high schoolers. And I guess I kinda wished our high school parties were as fun as this one. Though in my rewatch as an adult, I’m not sure how realistic or fun said party actually is. And it’s also super-clear that none of these dudes and ladies is even remotely high-school aged. Like Kid and Play’s nemesis in this film is a cool 30 years old. Literally, the actor playing this muscle-bound bully, Stab, is 30. And looks probably 35. Of course Kid is definitely not a kid at 26, and Play ain’t playin’ no more at 28. That whole thing is kind of absurd. Especially when you’re asked to suspend reality and pretend you’re nervous that these clearly grown-ass adults are going to get grounded. Oh my!

The first thing to get out of the way is that there is some very of-the-time gay bashing in this film. Lots of gay jokes and an entire, unnecessary and incredibly cringey scene in a jail cell in which several large men threaten Kid with rape. It’s played for laughs — I think — but is really, really bad. You forget how often people said “don’t drop the soap” in the late eighties. It’s almost a ruinous scene, but I suppose you have to chalk it up as pre-enlightened and move on. The other oddball thing, which isn’t bad, but is just weird is that this whole house party thing involves no drinking or drugging whatsoever. There is literally just one dude at this house party filled with teenagers who drinks what amounts to one can of OE and is ruthlessly shamed for it. I mean, I was a [real] teen in 1990, going to parties, and there wasn’t a person in sight not drinking or smoking. Or both. So, what gives?

Speaking of said party. The film begins with the roof being blown off a house. As if the music inside was so loud that it literally exploded. But once we’re actually allowed in this house, at this party, it seems pretty chill. And even, at times, kind of lame and/or boring. DJ Bilal (Martin Lawrence) is constantly having his table bumped by the same jackass, making the record skip during songs. When that’s not happening, he makes some annoying transitions and even goes to slow jams at times. Who does that! The two main women protagonists, in fact, don’t seem to have a very good time at the party, and one even bails early. In fact, the whole party ends abruptly soon after her departure because someone drops a load in Play’s toilet. So we have this party where there’s no drinking or smoking, DJed by a dude who is apparently not a terrific DJ (hired mostly because he’s Kid ‘n Play’s friend and has the equipment), our women aren’t having a very good time and the host pulls the plug on it because someone broke the commode. Hardly epic, I’d say.

So, after I’ve gotten past the fact that a film entitled House Party includes one not very good party, I have to focus on what else is going on. Which is made pretty easy by the all-in-one-day nature of the plot. Play announces at school he’s having a party — which I think is on a Tuesday or something — at his house with his parents out of town. He ropes in Bilal to DJ and Kid to help host. Issue is, Kid gets grounded because he gets in a fight at school with the aforementioned 30-year-old dude, Stab. This whole party idea is in the pursuit of a couple girls, of course. Because what else would it be? The day unfolds with Kid trying to escape his house, Play trying to get all the hotties to the crib and Bilal feeling slighted and used because, again, he just has the DJ equipment and no respect from his buddy, Play. Who, when push comes to shove, is kind of a shallow jerk. Kid is the real “star” here. Even when he later kinda, sorta tries to coerce Tisha Campbell’s character into sex. Ah, more innocent times. But, yeah, we watch Kid try to get around his Pops (the awesome Robin Harris), around the 30-year-old bully and his squad and to the party before it ends. While Play hosts. Bilal struggles with bad breath and media that skips when people dance. There’s also the old man neighbor, John Witherspoon, who calls the cops and yells funny shit out the window at the loud kids, and said white cops who constantly harass Kid and Stab and his gang. Along with Pops and anyone else black who happens to be walking the street. This is presumably director/writer Reginald Hudlin’s social commentary portion. Although it’s pretty ham-handed and played for laughs. Though it is a comedy, I suppose.

I’m not sure what I remember from this movie that would have made me pay to see it twice. Other than George Clinton playing a party DJ for a bunch of rich, black folks in front of this big house saying “Yeah I did it. Might cry two tears in a bucket, fuck it. Let’s take it to the stage.” I used that quote for years. It’s a fun one. But mostly I think it was interesting to see something that looked different culturally in 1990. Something much different than my own experience, but also something that I thought I’d enjoy and be up for. Or down with. Especially as a 17 year old. I was going off to college that fall, after all, and maybe in my head this is what that would be. I mean, it didn’t turn out to be that far off at times. Although, again, there was much more drinking. And we didn’t care who did what in our toilet. In fact, I even went to see George Clinton himself when I was at school. He wore a giant Yoda sheet from what I recall. Anyhow, on rewatch this film isn’t quite what I remembered it to be. I remember the jokes and the hi-jinx, but I swear there was more cool dancing than the couple short scenes that actually exist. And I swear the party was more wild and aspirational. Nope, not at all. And I guess, putting aside the fact most of the actors were a couple years away from their AARP cards while playing teens, it was probably a more realistic portrayal of what a party was like than anything the 80s ever gave us prior. But without the booze.