Visit From the Goon Squad 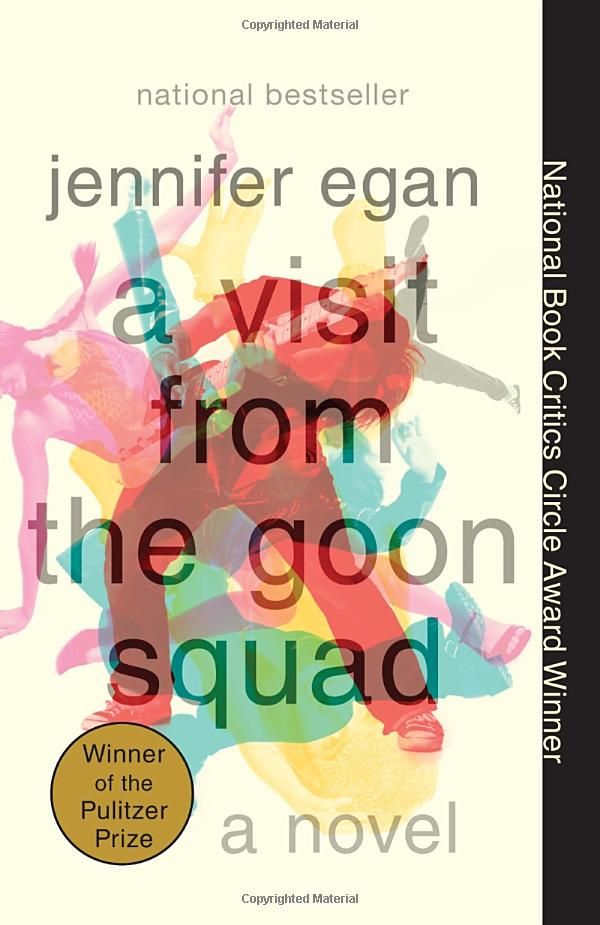 I’m always a little skeptical of books about the music biz. Not because I peripherally work in it, and have on and off since the mid-nineties, but because often they’re clichéd and ultimately kind of embarrassing in their quaint rock ‘n’ roll fantasy meandering. This book, written by a 49-year-old white chick doesn’t bode well on that front, as things are inevitably going to feel dated in their understanding and vernacular. And, on this front, the music industry stuff does kind of ring false, feeling at times like a bad made for tv movie script rather than an authentic peek into the world of the rock star and his followers. The whole way Egan deals with the music piece feels overly altruistic and unrealistic on just about every level. But I suppose I can overlook that part of it and try to concentrate on the book as a book and the characters therein.

First, this book, and the reason I refer to it as such, is not really a novel in the traditional sense. I mean, it’s certainly a novel in the ever-increasing mainstreaming of the post-modern novel, but in the linear chapter by chapter world of usual storytelling, it’s more of a group of short stories than a cohesive novel. But I’ve seen this narrative structure play out in book after book in my library, so dammit, I’m calling it a novel. So, this novel involves an ever-widening group of interconnected people throughout about a forty-year chunk of time. The novel has 13 chapters in it, all told during different pieces of time during these forty years by different people in this group. All the chapters are interconnected in that they involve the same people and pick up on storylines from previous or future chapters. Sounds simple enough, right? Honestly, I thought it was going to be more mind-bendingly post-modern, but if you were to reorganize the chapters into chronological order, the narrative would read pretty straight.

Did I also mention this thing won the Pulitzer Prize for Fiction between me reading it and writing this review? I know, right? I had no idea anyone had even read this thing, as it seemed to have narrow appeal and even narrower acclaim (outside of some gushing fools on Amazon). I suppose it takes all kinds. Though a lot of the prize-winning books I’ve read have been less than impressive. I’m not even certain what the criteria are. In this case I’m sure the geriatrics judging this thing thought her narrative style was all new and special, but as I mentioned, I’ve read tens of novels with very similar structure, so the whole out-of-order, connected storylines thing is really not very novel. They also seem to think she’s all technically savvy and all this other stuff that I certainly didn’t find. But, again, I know enough about literature to read something award-worthy, but it clearly doesn’t mean I understand it.

There are approximately thirteen or so core characters here (thus thirteen chapters), but the man at the center of the narrative is Benny. He’s kind of the one constant throughout, or at least seems to resonate through most of the narratives. We see him in his youth, in his ascent, in his prime and on the decline in and around the music business. He’s by far the most compelling character, and probably the only one who doesn’t feel completely “written.” What do I mean by that? I mean–and this might be an intentional stylistic choice–all the characters in the book feel like characters written for a book. None of them feels quite real. It’s like back when I worked at an ad agency and we had to put together personas. This is Sasha and she is an aspiring music mogul who has a kleptomania problem and lost her mother at a young age. This is Scotty and he was once the handsome tortured, but incredibly talented, lead guitarist of a high school band with promise who rocketed to fame and then blew it all on booze. Even Benny, as the washed up once idolmaker (who seemed to only sign nuns and weird children girl singing groups), feels like there’s a bullet-pointed character outline in Word looming in the background of every page. Again, maybe this is a conscious choice in making these characters so distinct and sharply focused, but most normal humans have dull edges and their personalities and the life they live because of it don’t fit so neatly together. Essentially each and every character peaks and then crashes and then, based on his or her personality, deals with his or her comeback exactly and perfectly in the way you’d expect him or her to. I’m not saying that I needed the thing to meander and aimlessly throw study after study at us, but putting people in these rigid character boxes felt antithetical to the somewhat loose feel of the narrative structure and writing style Egan presented.

There were definitely some parallels here between the Benny character in this book and the washed up rock ‘n’ roll character in Franzen’s Freedom. But, again, it felt like Egan was writing from a place of ignorance. Even just Googling this fact, it sounds like she wasn’t that into music and figured out a bunch of this stuff through research. My question is, why would you write a book that has music so at its heart if it’s not something you feel passionate about? After all, I think an author’s writing is so much stronger when she can embody her main characters. If Egan could live and breathe music as her character, Benny, did, I think this thing would have been so much stronger. Instead it felt like a person who read a few biographies and maybe hit up Wikipedia for what a record producer and a&r person does. I know I’m focused on this, but for me the lack of passion for and knowledge about the subject clouded all else. Additionally, there’s one chapter written completely in Powerpoint. There are two huge issues with this. The first is that it just felt gimmicky and out of place with the more organic structure of the rest of the story. And trust me, I’ve read my share of bizarre attempts to be bizarre (I’m looking at you Raw Shark Texts, House of Leaves, The Tunnel), but in this case it felt completely inorganic. The second issue is that what the fuck high-schooler uses Powerpoint? Seriously. She might as well have been writing with a quill and an ink well. Again, who let the 50-year-old hit the technology button? Anyhow, I’m being overly harsh on this thing because I expected so much more, and had hoped for something revelatory and not just kinda hackneyed and off base.