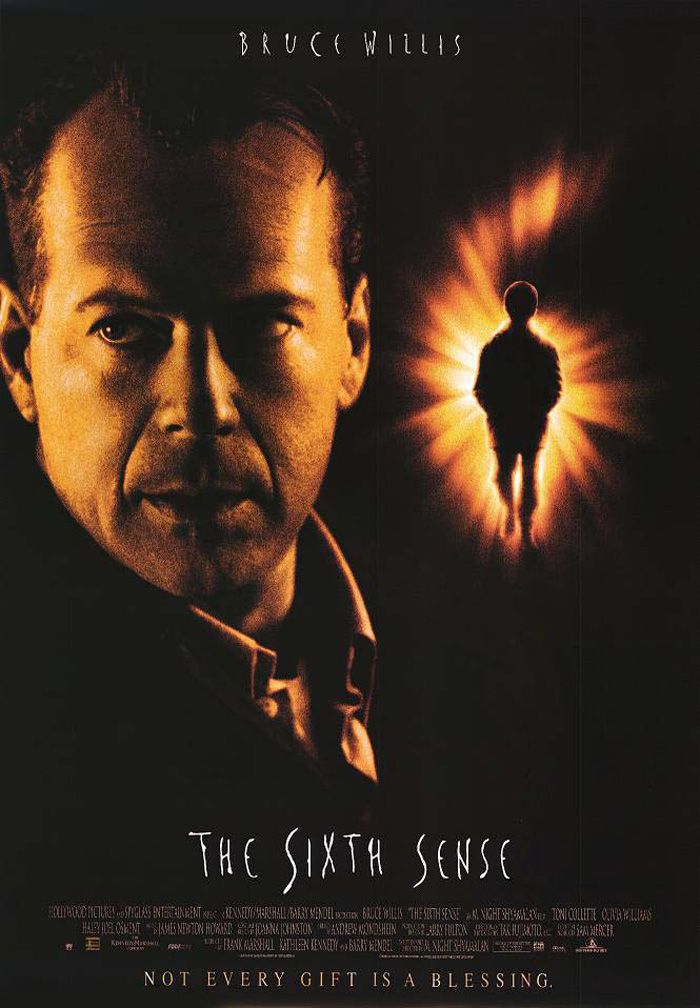 First, I must say that I was not as taken with this film as everybody else seemed to be. I think it definitely had some interesting things going on, but it was ultimately disappointing (read: it could have been a whole lot better). I couldn’t help but feel that this was familiar ground on which Shyamalan was treading, borrowing pieces from such films as Jacob’s Ladder, Audrey Rose, The Dead Zone, Beetlejuice and even Dr. Doolittle. Okay, some of these are stretches, but I didn’t say it was exactly the same, but just smelled a little like them.

So, there’s this kid who can see dead people. My questions is why? Is there a bigger message out there as to what in this little boy makes him the perfect conduit, the perfect sympathetic soul to be the person to channel these sad soul’s issues? I mean, why him? Is he the resurrected son of Jesus, or the evil stepbrother of Lazarus? Why has this “gift” been bestowed upon this kid? See, that would have been interesting. He could have delved into all sorts of cool history if he followed something there, but instead what we get is basically a two-hour Twilight Zone episode. As far as this fabulous “twist” goes, I am a staunch believer in consistency and being true to the plot twist. In all fairness, I haven’t had a chance to watch the film again to make sure they were honest with the twist the whole way through (as they were with a recent film like Fight Club), but I seem to remember a lot of inconsistencies throughout the movie that make absolutely no sense in light of the plot twist at the end.

I try not to give away any plot lines in these stupid commentaries (unless, of course, it’s a lame film that nobody will ever see), but this one is tough to work around. I was a late comer in the whole Sixth Sense phenomenon, and had been hearing people whisper about the twist for months, trying each time to plug my ears. I thought I actually got away with it, but figured out after ten minutes that I must have subliminally soaked up those conversations, and that honestly ruined it for me. I tried to pretend throughout the whole film that maybe I was wrong, maybe I heard incorrectly. Unfortunately, I did hear right and was underwhelmed by the ending’s revelation. Oh well. What I can say is that the acting was decent, if not a little overboard. Bruce Willis was his usual mumbling self and Haley Joel acts as though he gets beaten up a lot in school, but Collette was probably the best of the bunch, completely masking her Aussie accent and playing a convincing tough, single mother trapped in the world of netherworld Philadelphia.

I’m honestly surprised this movie did as well as it did. I didn’t think this would be most people’s thing, but, hey, I loved Barton Fink, so what do I know? In any case, it’s not a bad movie, and I certainly will give it a second chance on DVD. I’m really starting to believe that all movies need to be viewed at least twice in order for people to really know what they think about them. The first time, we spend the entire time just trying to soak up the visual and follow the plot line, unable to dig for deeper meaning and stuff. Also, as I said before, it’s difficult to know if a plot twist has been honest (or merely a stupid surprise, as is the case with The Bone Collector) without viewing it a second time with full disclosure.