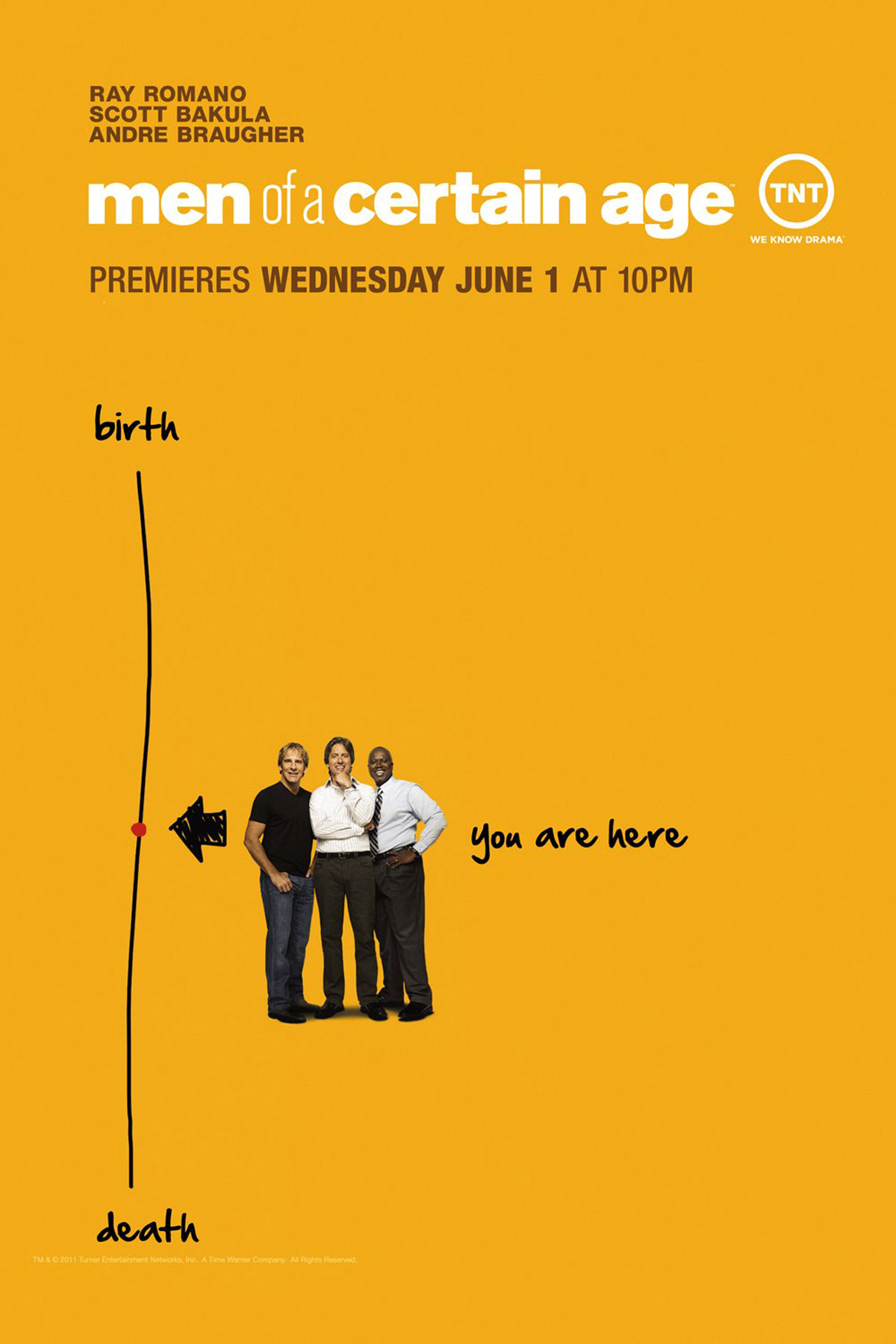 First, the men that are of a certain age are pretty much my age in season one of Men of a Certain Age. This is depressing on its face. Second, these same men supposedly met each other at the same university that I met many of my man friends. Third, they all three live in the city in which I grew up. So there are all sorts of parallels here. Albeit none of my man friends are: 1. The son of an NBA player vying to take over the family car business. 2. An almost-golf-pro who owns a party store. 3. A man-child struggling actor who sleeps with everything with legs. So, we have the age, the Syracuse thing and the Los Angeles connection, which for my money means I kinda, sorta had to watch this 2009 – 2011 series ten years on.

Let’s get the obvious things out of the way first. This is a ten-year-old show on a network, TNT, that has oscillated over the years between being the home of sporting events to reaching to put together second-tier dramatic television. Sometimes with moderate success. Sometimes not. I believe — despite not hearing about this show at all at the time — that this series was actually kind of a prestige play for this network back then. After all, you have the star of Quantum Leap in Scott Bakula, the star of Everybody Loves Raymond in Ray Romano and the star of Homicide: Life on the Street in Andre Braugher. Quite the powerhouse trio of television muscle. In terms of middle-aged dudes who don’t rise above the level of “Hey, I like that dude.” Three guys with respectable Q Scores who don’t seem absurd as college buddies.

What is a little absurd is that these three dudes went to a school in upstate New York, but all settled in LA. It happens, sure, but as a person who mirrors their experience considerably, the odds of that happening is pretty remote. Now, Braugher’s character, Owen, grew up in LA. So we’ll give him that pass. After all, I went from LA to upstate NY and came back for eight months before moving back to the East Coast for good. But Romano’s character, Joe, is clearly from New York, but both he and his elderly father — played by Robert Loggia — end up in Cali? That’s unlikely. I’m not sure we know where Bakula’s Terry is from, but I suppose if he’s an aspiring actor, LA makes sense. Although not a lot of people spend four years at SU to go on to commercial acting work. Ok, I got my geographical nit-picks out of the way. Even though they do sprinkle scene after scene with Orange paraphernalia, and even watch a game together at one point. So, it’s a relevent argument.

Now, getting to the actual show. It’s essentially about three dudes in the throws of mid-life crises. Joe is going through a divorce and coming to terms with his gambling addiction and dreams deferred of a professional golfing career. Owen is happily married with kids, but is struggling with his health and living up to the expectations of his overbearing father, who also happens to be his boss. And Terry is the Peter Pan character who can’t decide what he wants to be when he grows up, so he sleeps with twenty-somethings and bounces around just kind of being flakey and unfulfilled.

The show has the three men meet for breakfast every morning at the La Cienega Norms to discuss that week’s issues. It also acts as a little comic relief, as well as a decent mechanic to set up what that week’s episode will be about. I have to say that the whole Norms thing had me from the jump, as that’s a coffee shop (the now-closed Pico Blvd location) that I spent quite a bit of time in with my high school friends. But my personal feelings aside, these little scenes were actually some of the best. It’s where they bust balls and honestly shows some of the actors’ best work. It’s where we understand that these three seemingly different guys might actually be friends. It feels like the writers are most comfortable in this setting. Where there is little action (save some shoveling of eggs and breakfast meats), but lots of chatter. These were my favorite parts of the show, honestly.

What wasn’t my favorite part was the endless cycle of grown-man issues. And maybe the treadmill feel was exacerbated by the fact I binged two seasons of TV that were meant to be watched week-to-week. Or maybe it’s just because the characters themselves just aren’t that interesting compared with, say, a math teacher who starts a meth empire and becomes an arch-villain. These are just normal dudes with normal problems. And when you compress them into 22 hours they sometimes seem petty and sometimes just seem circular and repetitive. Owen’s biggest issue — aside from liking to sneak snacks in the middle of the night despite his diabetes — is that he can’t get the car salesmen and car mechanics to get along. Joe has a waxing and waning love of online poker and a son who is high-strung and needs talking down when he gets nervous. And Terry likes to sleep with attractive young ladies despite turning 50. So, I’m not really sure what Terry’s problem is.

The point is that with the rise of prestige TV and the insanely escalating stakes therein, we are used to characters dealing with much larger issues than if he should talk to the pretty foreign lady or try to date two women at the same time. And this is more likely my 2020 brain than anything the show’s creators (of which Romano is one) did wrong. They amped up the drama on occasion, even having Joe lose a tooth in a fight with a bookie at one point, but generally they stuck pretty close to the whole typical middle-aged issues of dealing with family, jobs and regrets. Lots and lots of regret. Because as we age we start to look back on our lives to see what we would have and should have done differently. And all three men have their things they would have changed if they could. But, as with any decent tale, we watch them come to terms with their mistakes and regret and learn to either change or live with what they’ve wrought.

And, yes, I know that doesn’t sound funny. Because it’s mostly not. Because getting older isn’t that funny. And although this show is ostensibly a comedy, it’s more in the bittersweet Parenthood vein than the former sitcom of its creator and star. But it only goes about 70% of the way there. The children never really have serious problems. Neither do the stars. I mean, they have issues, but they never kind of “go there.” Which certainly blunts the impact. It’s a pleasant show. It’s generally well-acted and very occasionally funny. But mostly it’s a reminder that they are now me. And nobody wants to be reminded of that shit.