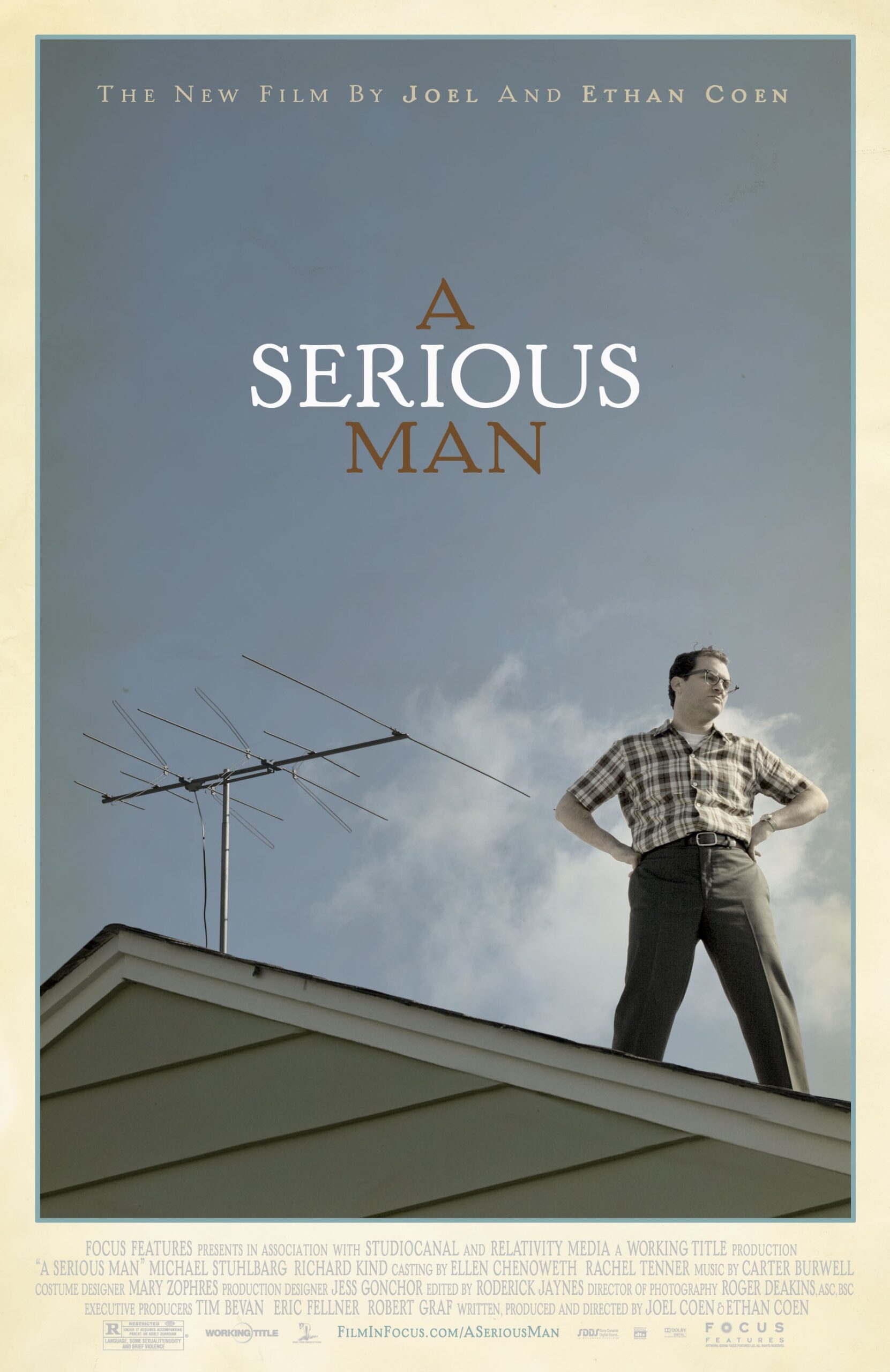 Finally. Finally the Coen Brothers getting back to what they do best–a symbolic, intellectual movie that is both entertaining and utterly dense at the same time. Harkening back to Barton Fink and Fargo, A Serious Man combines the mysticism of the former and the plot devices of the latter. Not that there’s anything wrong with some of their other “serious” movies, but this one just felt like a Coen Brothers’ classic.

Larry Gopnick is clearly cast in the roll of Job. He is a man put upon by his wife, his children, his students, his brother, his bosses and just about everyone around him. And he must suffer these trials all the while wondering why he, as a serious man, is being put through these trials. He goes to rabbis for answers; he gets stoned with his beautiful neighbor looking for answers. He even considers taking a bribe from a student in order to overcome his problems. It’s all very biblical in its Jobiness. I’m not familiar enough with the story to get into detail, but I have a recollection that Job, despite his trials increasing in ridiculousness, must take them on while remaining stoic because he understands that this is God testing his metal and that he is satisfying God by not questioning but merely surviving. The problem is, this isn’t the bible, and real people like Larry have mortgages, daughters who need nose jobs, sons who need Bar Mitzvahs and wives who kick them out of their own houses to move in their smarmy, fat bearded boyfriends.

The interesting part, and one that I know the Coen Brothers looked into, but I’m too stupid/lazy to, is that Larry is a physics teacher. Thus the argument of religion versus science. How can a man of science truly believe that he is being cursed by God or some other supernatural power? After all, he is a serious man, and not one that is flaky and believes in such nonsense as supernatural film flammery. I’m sure there is also some principal of physics at play here, as it’s just like the Coen Brothers to mix their biblical stories with a scientific theory. Brilliant! So, as a man of science, he tries to see his rabbi for some sort of logical explanation. Because that’s what scientists do. After being stymied in his attempt to see the “senior” rabbi, he is adrift. The funny part is that his son, who finds all his answers in weed, eventually gets that meeting with the senior rabbi after his Bar Mitzvah, and we see that there is no answer to anything and that in fact the rabbi has little more advice for him than to “be a good boy.” So much for the wisdom of the ages.

Meanwhile our man of science and man of waning faith wrestles with a moral conundrum in the form of that aforementioned bribe given to him by a student for a passing grade. This money burns a hole in his soul. How could a serious man accept that which he did not earn? But how could a serious man live at a hotel called the Jolly Roger separate from his family with his schizoid brother, cuckolded and broke? While he looks for an answer from faith, what he truly needs is to be that serious man and close ranks. The end, in typical Coen Brothers’ fashion, is ambiguous in the fact that despite Larry deciding to man up and be that serious man, his trials, just when they seem to be at an end, only amplify to a deafening crescendo in the closing minute of the film. Is this the answer then? Go against what one knows is right and take the “easy” way out of one’s trials and be struck down by God? Or is it all a matter of that scientific theory that I know nothing about (but he and the Coen Brothers probably do)? Whatever the case, it seems that fate and/or scientific theory has a hand in what is going to happen with Larry and no matter what decisions he makes, what advice he gets and how serious a man he turns out to be, something or somebody has it out for him — and has it out for him bad.