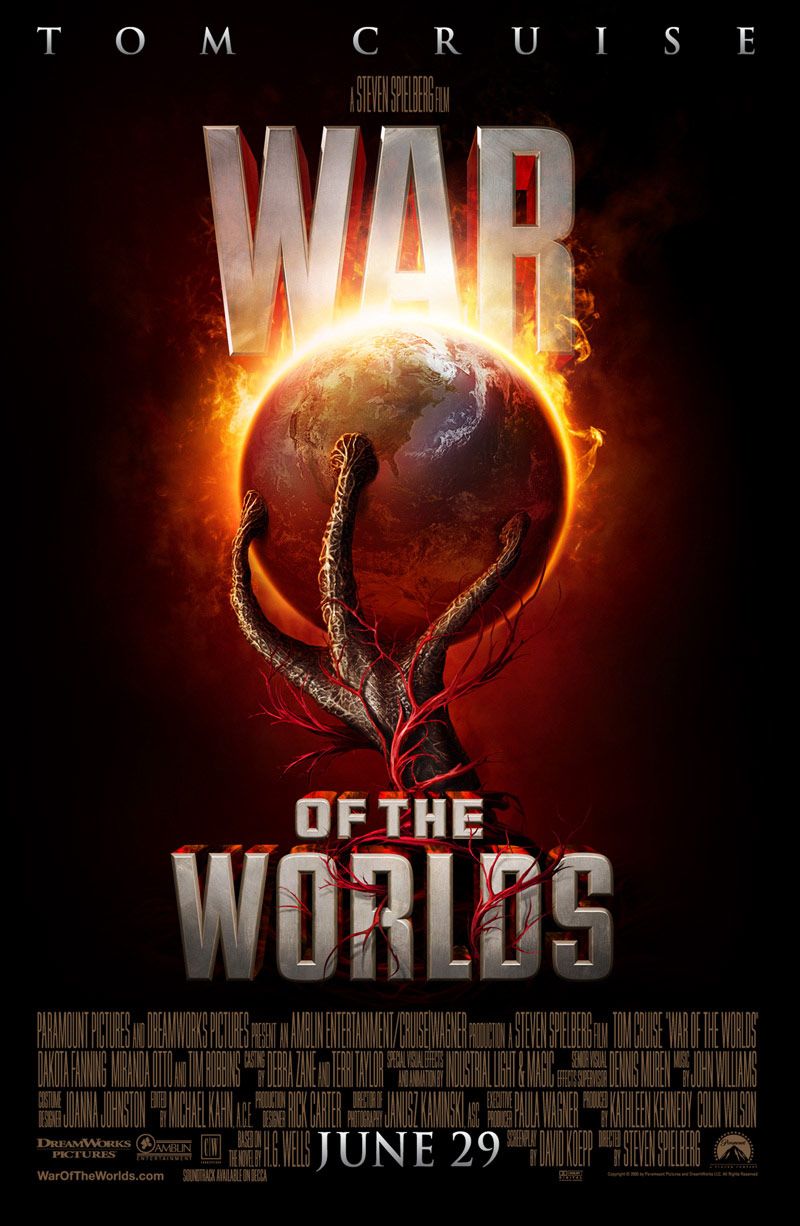 War of the Worlds

I hated it better when it was called Independence Day. Wow, this thing was an utter and complete mess. Maybe my standards have become too high — or maybe everyone else’s have become too low. I mean what happened to the man who made E.T. and Schindler’s List? This was schlock. This was mindless and completely not thought through. Oh god, it’s getting worse the more I think about it.

I knew things weren’t gonna go my way as soon as I heard the lame Morgan Freeman voiceover intro (which, of course, was bookended by an even worse outro). Seriously, though, if you take the plot of Independence Day and sprinkle in a dash of Signs and take all the bad elements of both (including the Ewok dance-like ending of ID4), you still have twice the movie this one was. There is a scene where Cruise and Dakota Fanning are stuck in a basement with a paranoid Tim Robbins that I swear goes on for an hour. It’s insufferable. The editor must have fallen asleep, because this isn’t the only scene like this.

There is a large chunk of the movie where our protagonists, along with a bunch of other folks, are trying to board a ferry; a scene where they seem to approach the boat from the same point at least ten times. It’s confusing, overly-long and poorly edited. But back to that basement part. From what I read, Spielberg decided to copy his asshole pal George Lucas and shoot on digital video. I don’t care what they say, the look suffers. Gone are the subtle tones and imperfections. The picture is too clear and television-like. That scene in particular looked like a cheesy set, as you could see every nook and cranny, rather than having dark corners and shadows. And, look, I understand what can only be described as one of the worst Hollywood endings of all time can be blamed on the original War of the Worlds (as it ends the same way), but isn’t Hollywood the town that loooves to change movie endings? Aren’t they the ones that changed the ending of the Keifer Sutherland remake of the original Dutch film, The Vanishing, so that everyone is happy and the bad guy gets what’s coming? Why couldn’t Spielberg break ranks with not only Hollywood but also himself and give us a Miracle Mile ending? Why couldn’t we see what kind of deadbeat dad Cruise could truly be?

Speaking of Cruise’s character… I almost bought him as the absentee dad and New Jersey dock worker–if he didn’t look like f’n Tom Cruise and talk like a man who’s been sitting in a Scientologist reading room and not cussing up a storm with a bunch of Jersey blue collar dudes. I mean, are we suppose to buy the fact he doesn’t have an accent? And then comes the game of catch in the backyard; the game of catch where it becomes painfully obvious why Cruise has left the baseball movies to Costner and Charlie Sheen. Despite his supposedly being a throwing badass, he looks as though he’s tossing the ball with the wrong hand. I haven’t seen anything that awkward since Sam Jackson’s running scenes in Attack of the Clones.

That aside, his character has never heard of hummus and really has a knack for avoiding alien lasers. Another odd thing is everyone in the movie’s fascination with standing really close to cataclysmic events rather than running away like they should. The entire first scene in which Newark is destroyed (yes, Newark), people stand around while giant things come out of the earth and level entire buildings. It’s not until they start vaporizing people that some of them start running. Why in the hell would you want to get closer to a giant sinkhole than you need to be?

The most egregious thing in the film (which also came off a little offensive) was Spielberg’s really obvious, over the top references to September 11th. He had dust covered people (including a horrible scene involving Cruise that was oddly comical without meaning to be) and giant banks of missing posters and lots of various other scenes that intentionally evoke 9/11. Did I mention I saw this for free–along with everyone else in the Ziegfeld? Despite the cheap night, there was still a giant moan from the capacity crowd at the ending, and some serious grumbles from folks filing out afterwards (and it wasn’t just because it was pouring outside). Turning up the volume to ten and having tons of CGI lightning does not a movie make–and if anyone should know that, it should be Spielberg.