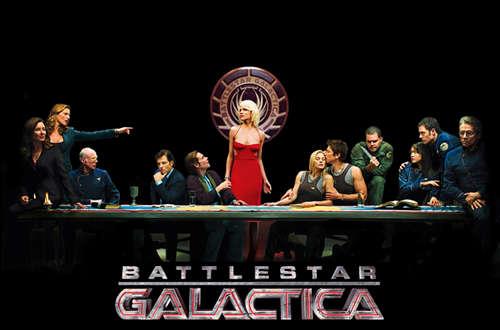 I’ve already extolled the virtues of the Roku, and this, my second go ’round with watching an entire television series from episode one until the series finale (the first being Lost) was an awfully enjoyable experience technically and convenience-wise. Using Netflix streaming, I could pause when I wanted, stop an episode halfway through when Ms. Hipster nodded off and start right back up the next night. And I didn’t have to wait through the summer for the series to start back up, a week for the next episode, didn’t have to wade through commercials, wait for DVDs in the mail or anything else that could interfere with my viewing pleasure. Sure, it takes away some of the build-up and suspense, but what the hey. If I’m going to commit to watching 77 episodes of anything, it better be on my terms.

Now, I was a fan of the original Battlestar Galactica series. I know that makes me like 100 years old, but we had very little in terms of entertainment back in those days. I recently watched a couple episodes of Buck Rogers and realized how just incredibly horrendous it was. It made the Flash Gordon movie look like an ILM wet dream. So, in a nostalgic mood, and based on highly positive reviews from trusted sources over the past few years, we decided to dip our toe in the modern Galactica water.

Did I ever mention that Edward James Olmos was an actor I actually “studied” in one of my criticism classes back in college? Well, I did. And also growing up watching his prototypical police captain performance weekly on Miami Vice I knew we were in for a good time. The man — who is apparently a notorious pain in the ass — never met a close-up he didn’t love. And how do you force close-ups? You talk real quietly and mumble a lot so they have to get right in on your face to understand what’s up. And then? And then you fucking explode and clear all the shit off a desk and throw yourself around. He’s the actor’s version of grunge music. Get real quiet and then, blam, hit ’em with the screaming. Amazing for music. For acting, not so much. But so, so entertaining for drinking games and making fun of when the series is in one of its many lulls.

EJO (as I like to call him) is one of the very few name actors in the series. Mary McDonnell is arguably a name, but she could be any middle-aged actress who looks like she might or might not have been Amy Madigan at some point. This was actually a plus for me, as even a couple characters like Dean Stockwell and Lucy Lawless, who rotated in (and out) were kind of a distraction. Despite this, the acting, while over-the-top at times, was relatively decent for a sci-fi series. With marked acceptions (I’m looking at you Sharon the Cylon).

The gist of the series is that there’s a war between the Cylons and what is left of the human race after the Cylons pretty much nuke them out of existence. Granted, these aren’t Earthling humans, but a human race that is essentially alien (to Earth), but may or may not be related to our modern-day human selves. And, unlike the old series, the Cylons have moved on from being shiny robots (though those still exist) and have taken on human form and have assimilated into the Galactica’s populace. Or so every paranoid thinks. So the humans, spread across a fleet of spaceships spend the series “jumping” from place to place trying to both find the mystical Earth and avoiding getting blown up by the Cylons. That’s pretty much it.

Mixed in there is lots of political and emotional and religious stuff. And the word “frack,” which is basically the equivalent of “Smurf.” You know, “Smurf this,” “Smurf that,” “Smurf you.” In fact, if I didn’t know any better, I would swear that what started out as a story that clearly was meant to mirror the events and aftermath of 9/11 turned into an almost uncomfortable (at least for my non-believing self) quest for God. Granted, a muddled quest for God, but one that almost preached pre-ordained religious fate and angels and shit. A strange turn, to be sure. And then there’s the British scientist dude who sells out the human race, has this imaginary Cylon in his head, somehow becomes president and cries in almost every scene he’s in. And then he becomes this weird leader of a harem of religious followers. It makes almost no sense. And while I enjoyed my time upon the Battlestar Galactica with Kara ‘Starbuck’ Thrace and Apollo and stuff, the series ultimately made about as much sense as religion ever does.