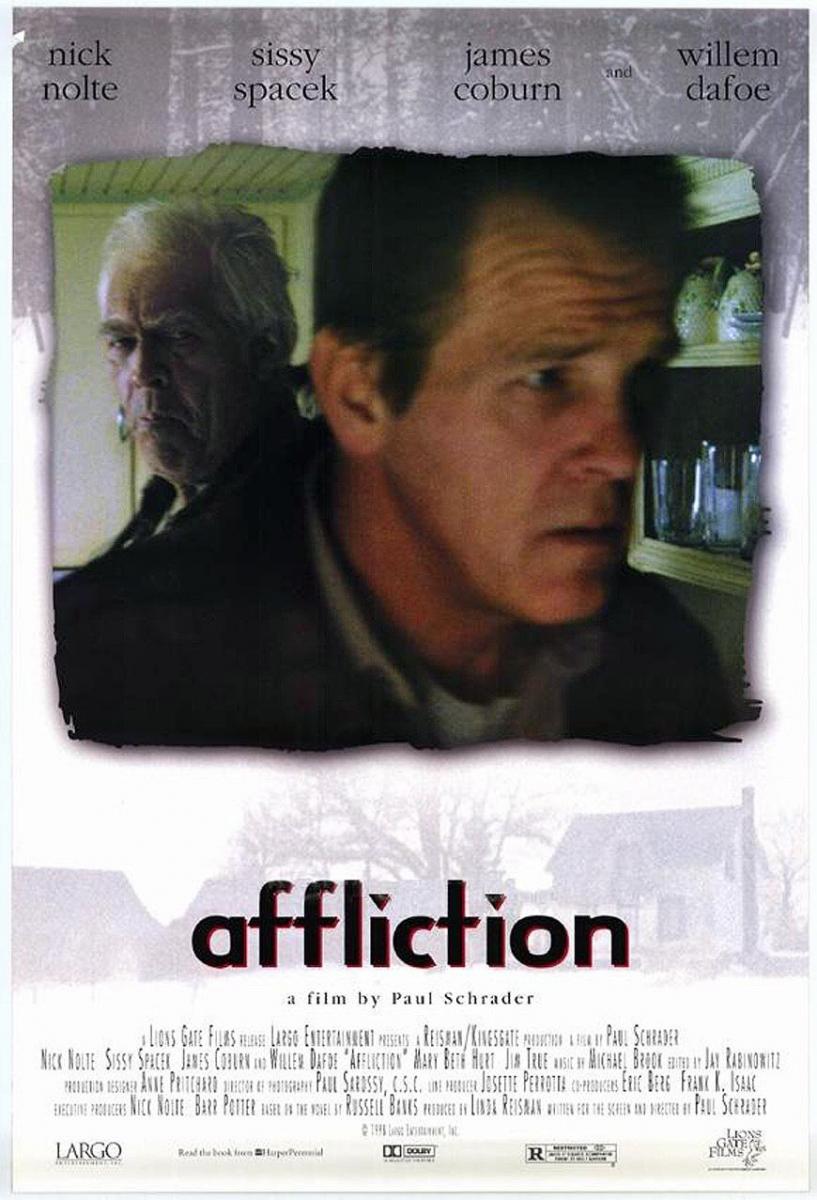 Sometimes films just try too hard. Thus is the case with Affliction, a movie that beats us over the head with a message I’m not quite sure I get. The beginning scene didn’t exactly bode well for the movie, as Wade Whitehouse (Nick Nolte) drives in his truck in front of one of the worst jobs of blue screening I’ve seen since the soap-box derby scene from The Little Rascals. Taken from the novel by Russell Banks, who was the writer of The Sweet Hereafter, this film has a similar feel and pace to that film. Everything seems to be shot through a fog, in slow motion, on Valium, with an anchor tied to it and sunk in wet cement. It leaves you almost wishing for an explosion and a Will Smith cameo. Almost.

James Coburn won an Academy Award for his role as Notle’s abusive, alcoholic father, whose life is both despised and mirrored by his son. In flashback scenes shot in some sort of fake super-eight-looking footage, an apparent French-Canadian Coburn yells at his young son, shoves his wife, drinks and basically rants and raves a little. Somehow, in the present day, Coburn is no longer French-Canadian and hasn’t died from his drinking — and, actually, doesn’t look that bad (and this is a guy who drinks hard!) He plays the typical drunk abusive father and really wasn’t overly impressive.

Nolte, on the other hand, is really very good in his role as the tortured soul. There are times when his scratchy voice drops out of range and I had to turn up my TV to max volume just to hear what was happening, but he maintains a degree of angst that seems real and genuine. The casting of Nolte and Coburn together is, despite some cliched dialogue and overacting from Coburn, perfect. The two end up looking alike, speaking alike and walking alike. I think that’s more the actors themselves than their acting ability. Dafoe is kind of a throw-away character as Nolte’s wimpy brother, and the girl who plays Nolte’s daughter needs to stop acting this instant, as she is the most annoying kid since Master Bates from The Toy. Oh, and let’s not forget some stupid side plot about a murder that goes nowhere and is explained away by two lines of irritating voiceover by Willem Dafoe.