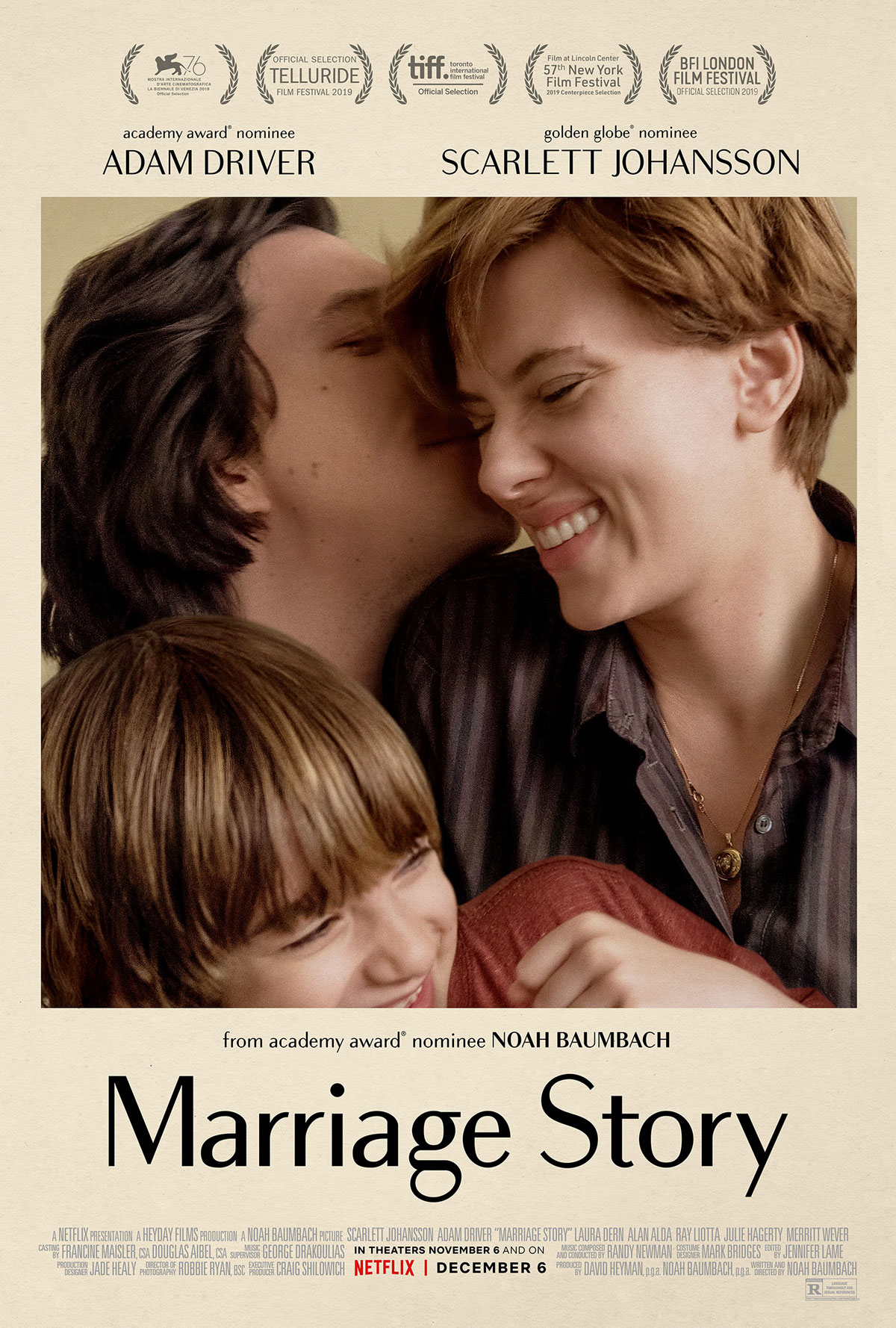 I recall someone saying that they should technically call this Divorce Story. Accurate. And then someone else I know asked why in the hell anyone would want to watch a movie about the slow-motion car crash that is the dissolution of a marriage. After watching it, I kind of asked myself the same thing. We all know what divorce is. With few exceptions, most of the kids I grew up with in LA from a young age ended up with step parents. Some of them step parents several times over. And while I didn’t experience divorce first hand, I certainly get it. Shit happens. People grow apart. And things end.

So, like my friend asked, why would I want to watch a scripted version of this drama? Especially when we already have Kramer vs. Kramer and the horribly mean-spirited War of the Roses? Do we really need the 21st century version of either of those films? Honestly — and I know this was nominated for an Academy Award — the answer is probably not? I know Baumbach excels at writing these relationship films. And I’ve seen most of them. I’m probably 50/50 in terms of liking them. His style is supposed to be part naturalistic and part play-like pretentious. The second part is probably unintentional, but his generally privileged, liberal white characters do all have this intellectual homogeny about them that feels very much part of a singular world.

In this case, I know most of this is modeled after his own divorce from actress, Jennifer Jason Leigh. Despite that fact, some of the reactions of the characters seemed to ring false to me. Both Adam Driver and Scarlett Johansson’s characters are supposed to be educated, intelligent people. Yet they both are taken completely by surprise that divorce isn’t like a super-simple process. And that once lawyers get involved things get hairy and way more complicated. Have they never had friends get divorced? Have they never watched a television show or a movie? Seriously. We can’t expect that these two people would be that naive. And this conceit kind of ruined the rest of the film for me. I just didn’t believe they’d be that clueless. Maybe we’re supposed to believe that because he’s a self-absorbed, artsy playwright type and she’s an equally self-absorbed actress?

But if you ignore that fact, you have what amounts to a script you just know screamed Academy Award. Driver gets to emote and punch walls. Scarlett gets to deliver devastating Baumbach one-liners. But it all feels a bit trite to me. And maybe it’s because I grew up with a therapist mother who probably overshared the details of others’ divorces with me, but none of this was surprising or even new. It all seemed pretty rote. So I’m not really sure what I was supposed to take away from it. And, sure it gave an opportunity for the two leads to flex some non-Star Wars and Marvel muscles, but there’s something in the tone that just felt off to me. Like Baumbach had something more to say, but backed off because of the obvious connection to Leigh.

Besides that, I’ve always been a little critical of Baumbach’s directing. There are things he does that I don’t really like. I think he thinks some of his camera moves and editing feel “indie” or 70s-ish or something, but I find them distracting and kind of half-baked. I also know that he’s about efficiency, with most of his films being on the shorter side. But this one, even at its much longer length, still felt unevenly edited. Especially as Driver hires and fires lawyers, it felt like something ended up on the cutting room floor in several scenes that shouldn’t have. So there is an abruptness to some of it that broke up the flow of the film in a strange way, especially toward the final act. Driver also sings a song at one point that goes on for an awkwardly long time that felt out of place with the rest of the movie and kind of took me out of it. And, yes, I know it’s an artsy way to tell a story and there’s some Broadway connection there that I know nothing about, but opinions like mine are obviously subjective and, often times, stupid.

Even with all these complaints, I enjoyed aspects of the movie. I enjoyed the acting. It moved itself along at a brisk pace and didn’t feel overly long even at well over two hours. It was great to see Julie Hagerty. And Merritt Wever is always delightful. So there’s that. Look, maybe for some (or most) this felt like an honest and real exploration of the divorce process. It just didn’t hit me there. But as a film it was totally fine. The characters were interesting and were presented in what felt like a pretty even way. Fault was spread relatively evenly. It does feel like we’ve seen Laura Dern do this character before, so I’m a little baffled by the Oscar, but maybe it’s one of those cumulative things. Because she’s good, but she always is. Anyway, the movie is on Netflix, so everyone can go judge for themselves. But I just don’t quite get the hype.