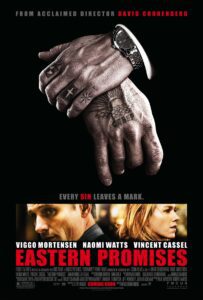 Naked Viggo; I’m sure my mom would be excited to see “the blouse man” doing roundhouse kicks and eye gouges with a couple Russian mobsters while in the buff. Me, not so much. Of course most people now know Viggo as Aragorn from The Lord of the Rings trilogy, but my mother will never give up on him as the guy who sold frilly shirts to the lonely Catskill housewives in A Walk on the Moon. Of course, he has lately become David Cronenberg’s steely muse, giving a deep edge to Cronenberg’s ultra-violent tales of twisted morality and ambiguity.

The funny thing is that watching some of the DVD extras afterwards, Mortensen comes off as the nicest guy on Earth, laughing like a kid and telling a story about how bad he felt when he accidentally scared a couple of Russians in a London pub when he left the set still in character and all tatted up. He seemed like he was mortified about it, and went over and even explained to them that he was an actor, and not a crazed Russian criminal. So, how did this sensitive everyman (the guy paints and writes poetry for god’s sake) become the incarnation of evil? Well, that’s where Mortensen works, even as violent and relentless as his characters sometimes are, the filmmakers know enough to give him a warm, human core that belies his square-jawed, piercing exterior.

Eastern Promises, like A History of Violence before it, is at its root a character study and morality tale about how far a person is willing to go to make things right. How far outside of their base character are they willing to stretch in order to do the right thing? Cronenberg takes this to the extreme, of course, embroiling these characters in situations that call for stabbing dudes in the eyeball, slitting throats and debasing women, but the ultimate result is to bring a greater good. Isn’t it?

That’s where Cronenberg’s movies (at least his new batch) are ultimately a little frustrating. We kind of want our filmmakers to take a side. We want them to proselytize or express an opinion on things, but Cronenberg leaves things ambiguous to the point that we’re not sure what to think. And it’s not that he presents a situation that’s black and white, and then just doesn’t tell you which way to think; he’ll purposely present scenes that call into question entire chunks of the characters’ motivation, leaving us with a feeling of being duped. This is especially true of the ending of this film. Trying not to give too much away, we get one half of our mind settled with one story arc, but the other–in an obvious homage to The Godfather II–leaves us wondering when the sequel is coming. Or, rather, have we been taken in by this character the entire film, and now his true motivation has been revealed? We have no f’n idea, and I think Cronenberg likes it that way.

Look, I don’t need closure around every piece of a movie, and perhaps the reason he leaves the ending ambiguous is because the character himself is undecided what he’s going to do. Oooh, when I think about it from that angle, that’s kind of cool. Never mind–Cronenberg is a genius!

I know I tend to watch and then describe films as taking place in a weird vacuum, and being claustrophobic, but it definitely applies to this film. There are only a few central characters, and a lot of the described action takes place outside of the narrative. We have, for instance, a Russian Mob boss who seems to spend 24-hours a day in his large restaurant. We never see him interacting with anybody outside of his son and Viggo. He doesn’t seem like a guy who’s running a large criminal syndicate. Where are the clandestine meetings, the truck hijackings, and the shootouts with the cops? There’s none of that. We never really get a sense from Armin Mueller-Stahl’s character (who always plays either a Nazi, a German Jew, a Russian or a Russian Jew) that he’s that evil of a guy except from third-party accounts and one scene where he abuses his son (but it’s out of love). We just don’t get a real sense of the breadth of the organization, what their criminal enterprises consist of, and how they execute their business. But whatever.

While I liked the film somewhat, and the acting was decent, I always find Cronenberg’s movies to be missing some essential element. It’s like he’s too standoffish with his subject matter. Maybe it’s because he knows every twenty minutes or so, somebody is going to be splattered with blood, or gouged, kicked or raped, and he’s afraid to get too close. Or maybe it’s his extremely straightforward filming style. The things almost feel like stage plays; they’re so sterile at times. But whatever the reason, there’s a connection that feels like it’s missing at times–a deep-rooted connection that would really involve you in his world more readily, rather than keeping you at arm’s length. I think if Cronenberg could put his head together with another director who could add some warmth to his films, the things would really be amazing. Until then, we’ll have to settle for semi-good violent thug films.