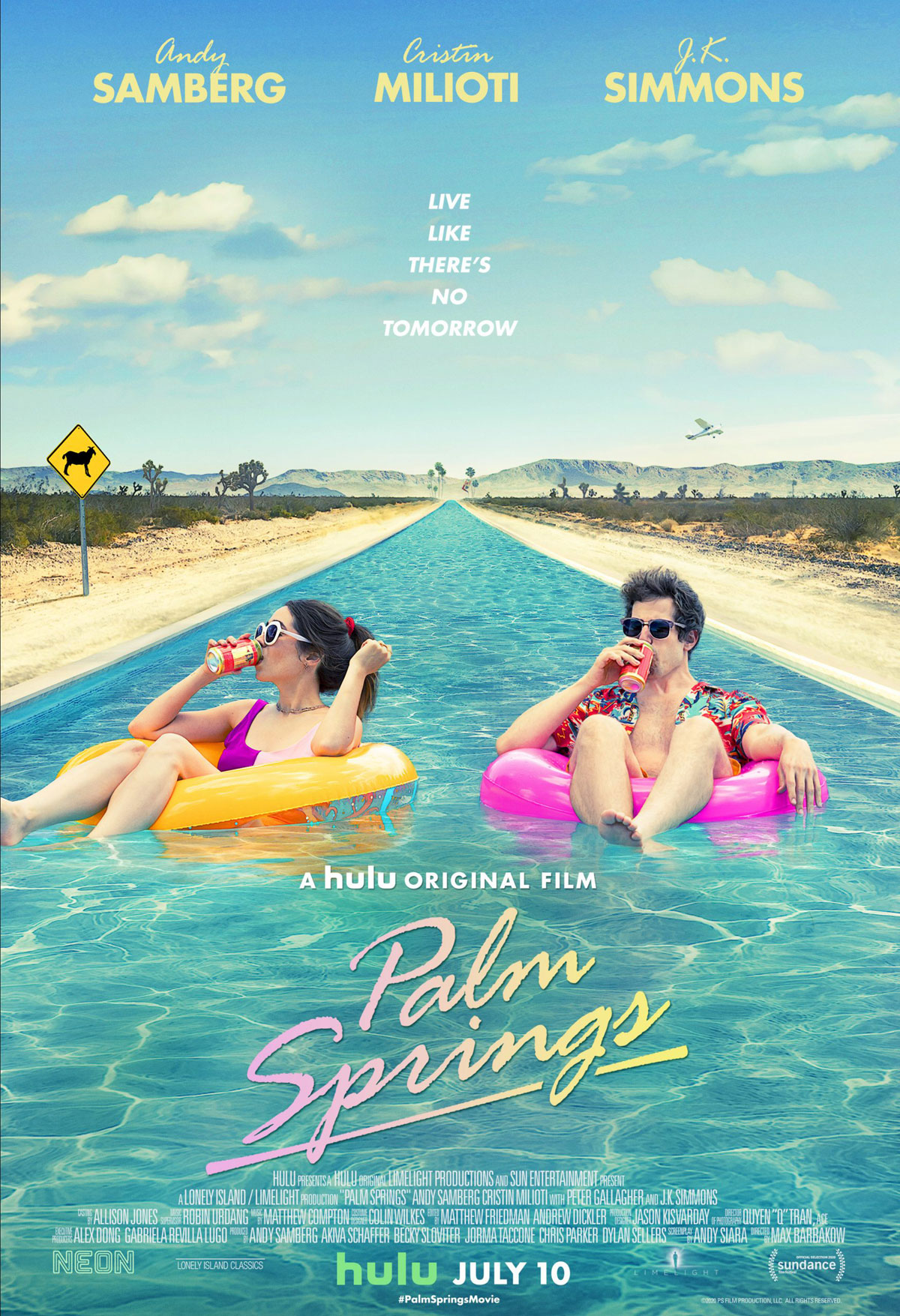 Is this to be our new normal? These movies like Palm Springs with their high-concept / low-concept, middle-of-the-roadness. A soft R rating because it’s an adult movie with adult themes, after all, but definitely aiming straight at the heart of pop film culture. A romantic comedy couched in a time loop. A little sci-fi(ish) shell that tells that familiar story of resistant love. A Groundhog Day turned on its ear, doing away with most of the moral quandaries and ambiguity and just getting to it.

Your first trick is finding your new Bill Murray. And while I always found Andy Samberg kind of goofy and annoying, he won me over with his undeniably likable character on Brooklyn Nine-Nine. And, unlike Murray’s character, we join his Nyles (no last name) character while he’s already been in his time loop for decades. He recounts how he fell into the loop, but we don’t get to watch along with him as he discovers he’s stuck. That is left to his eventual loop partner, Sarah (Cristin Milioti). He is already a well-worn cynic when we join him in progress. Well, not a cynic per se, but more of a nihilist. And Samberg is a decent vessel for the whole “I don’t give a fuck” attitude, while still keeping it light.

So, if you’ve seen one of these movies, you know what to expect. The characters repeat the same day over and over again. They try to stay awake, but inevitably fall asleep and end up waking up in the same bed on the same day. They try to kill themselves, but wake up in the same bed on the same day. In Nyles’ case, he’s been looping for so many years that he knows each and every move of each guest at the wedding party he’s attending with his girlfriend in Palm Springs. At some point in his journey he accidentally and drunkenly pulls another dude into his loop, Roy (J.K. Simmons). And Roy is pissed. And then, eventually, the same thing happens with Sarah. Who is also pissed. Though her anger doesn’t manifest itself in homicidal rage like Roy, but she is less than happy repeating what turns out to be a pretty shitty day for her. After all, it’s her perfect sister who is getting married that day.

So now that you have the shell, the romantic comedy center is the real heart of the thing. And it’s pretty darned typical. One character starts off hating the other, but over time comes around to understanding that maybe he’s a decent dude. The thing that makes this a little different is that while most rom-coms have like a one week timeline, this one could, in theory, last decades. The thing is, they could have done something different here. They could have played with time and switched up the rom-com tropes. But, no, the dude who wins her over is eventually found out to have been lying about something fundamental about his character, which breaks the couple apart. And, again, in rom-com fashion, they spend some time apart, which somehow makes the heart grow fonder. But whereas the typical comedy might make that a couple months, this one makes it long enough for one character to seemingly earn a degree in quantum physics. But it’s still the same thing, as love overcomes whatever past indiscretions one or both parties committed.

So, beyond the fun the movie has with some of the time items, it really comes down to the couple in the romance. And while I can’t speak to the smoldering chemistry between the two (it’s not really that kind of movie), they certainly have good comic chemistry. Samberg is a charismatic drunk layabout. And is certainly believable in the part. He does tone down some of his twitchiness, although next to Milioti anybody seems chill. Because she is a manic ball of fun. Like Nermal on a pound of cocaine. And their energy definitely gives those vibes of the 1940s road films. Nyles isn’t as well drawn a character as Sarah, but you kind of know the guy. His story is less interesting. Granted, it does feel like these two characters should have been about ten years younger than they are, but I think they just figure nobody would think of Samberg as being 42 based on his boyish weird looks. After all, it’s kind of a cop out when someone is still a lost soul into his forties…

So, while this is, at its heart, a pretty typical rom-com, I am a fan of the genre. I know, I’m a confusing person. I’ve watched both No Strings Attached and Friends With Benefits. Both of which came out in 2011 and starred Black Swan dopplegangers Natalie Portman and Mila Kunis. I dare you to remember which one is which. But as far as this movie goes, it’s a very decent version of that breed of film. It’s breezy and bends the narrative just enough to not make it completely predictable. The performances are entertaining — even with Peter Gallagher essentially playing his Sandy Cohen character from The O.C. — and there is enough ambiguity and sci-fi in there to spurn conversation about the meaning of some of the scenes. Including a couple where they seemingly throw in dinosaurs for no apparent reason. Or was there one? Ultimately it doesn’t matter (thought it’s fun to speculate) because the leads do a great job of keeping us entertained for the movie’s entire 90-minute runtime.

Look, it might be a minute before we’re really back in theaters. Which is great for idiots like me who rarely get to them. So we get movies like this one that are kind of built for the streaming ecosystem. Those funny, funky little films that hit a wide swath of the general public. They’re not niche films. They’re not overly complicated genre pieces. They’re pop films with pretty mainstream ideas. But they’re original works. Not based on books (comic or otherwise) or remakes of old television or movie IP. It’s something that feels like it’s been missing for going on a decade or so now. And I, for one, welcome it. I don’t need everything to be Tenet. Sometimes we just want to sit back, have a few laughs and enjoy watching a couple funny people banter.