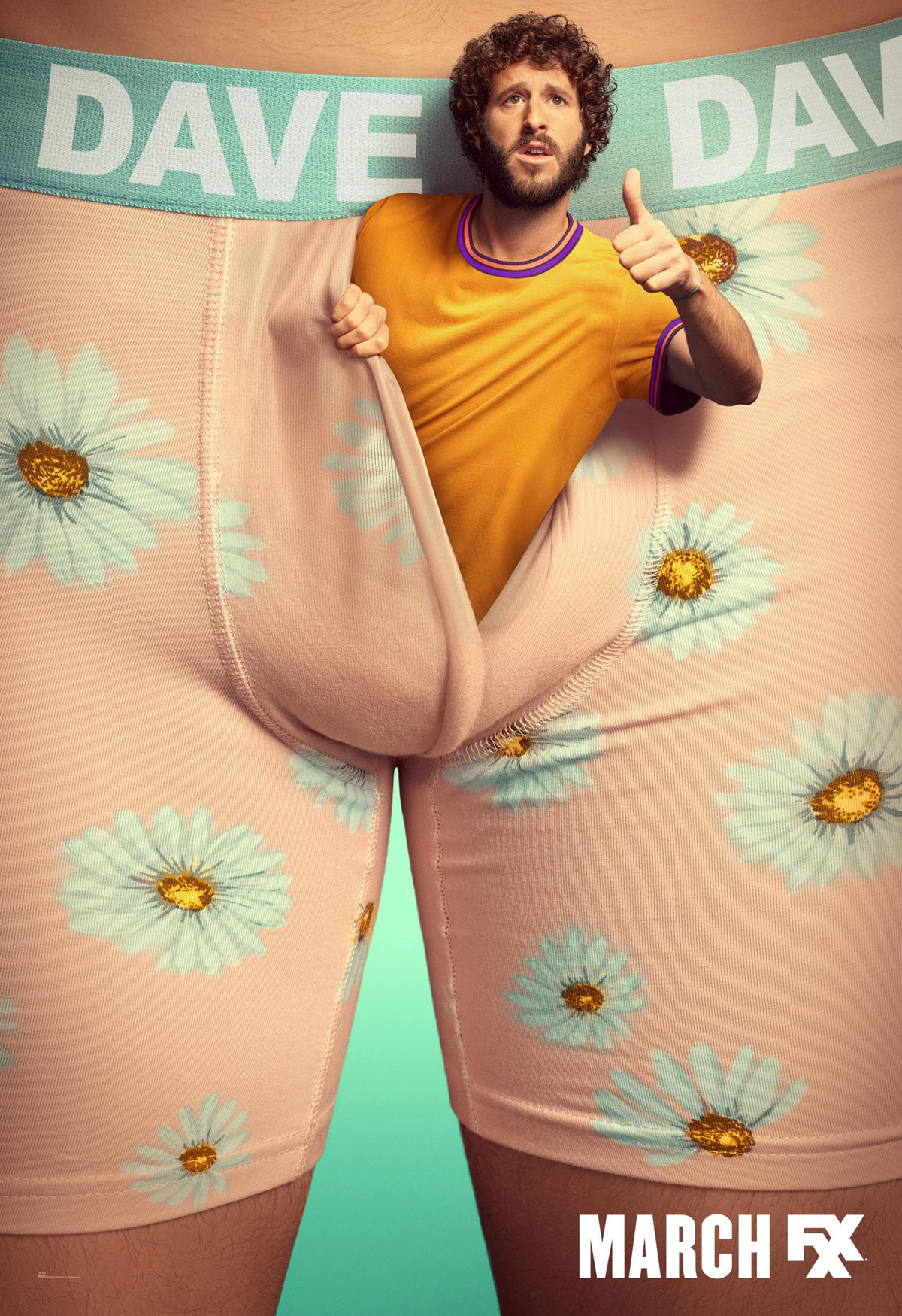 You kind of know what you’re getting yourself into when you watch a show starring a dude whose rap name is Lil Dicky. Dave Burd, the titular character in Dave, is a former copywriter turned rapper turned television writer/actor. I imagine he sat in meetings at his ad agency making people laugh with his word play. Though I can’t imagine that his lyrics revolved almost completely around his penis the way they do in his pro rap career. I work for the same company he did and I know they tend to frown on that kind of stuff. At least these days.

The show is a semi-autobiographical look at not-so-lovable loser, Dave, who has essentially banked his future on the belief that he is the second coming of Kanye. An upper-middle-class dorky Jewish nebbish isn’t exactly what most people think of as the next big thing in hip hop, but Dave has an overriding sense of self-confidence that is both confusing and completely unearned. He procrastinates and, while supremely confident about his rapping, fails to write on a regular basis and is a complete mess in his personal relationships. It is unclear at times how he pays his rent or affords food.

Despite this, he has a small cadre of friends and believers in his ability. Or maybe they feel bad for him. It’s never quite clear. His girlfriend puts up with his selfish behavior and general slackery for some unknown reason, despite seeming like a pretty okay person herself. Dave definitely suffers from some Costanza / Larry in Curb energy and constantly — and I mean constantly — talks about his deformed dick. He talks to his two best friends about it. He raps about it. He eventually comes out to his girlfriend about it. Luckily we never have to see it, but I feel like he eventually describes it to just about everyone he meets.

This is the not-great half of the show. There is some good, funny stuff in there, but way, way, way too much sexual hangup talk. And Dave nudity. And talk about dicks and scattalogical stuff — including a shot of him literally having explosive diarrhea in a puddle. It’s unsubtle and some if it is more weird than entertaining. I’m also kind of a prude when it comes to this stuff. But based on the show’s poster and his rap name, I suppose I should have expected it.

The thing is, the dick jokes are only half of the show. The season is front-loaded with this stuff, but in the back half it really takes off. His relationship with his hype man, GaTa, is especially good. It’s a relationship that exists in real life, and despite neither of them being actors, really comes across on screen. GaTa seems like a cartoon character when we first meet him; fast talking, constantly making up fantastical stuff and seemingly manic. But oddly loyal to a fault. It’s not until later that everything we thought we knew about him was an underlying symptom of something larger. And the show really humanizes him and drops an emotional bomb in the middle of a sitcom you just thought was about dumb stuff.

Like GaTa, Dave’s friend/producer Elz (Travis Bennett) gets his own bottle episode of sorts as well. And he too is rounded out as a character in a way that is endearing and really well done. To understand these seemingly secondary characters is to understand why they might put their faith in Dave/Lil Dicky. Why they recognize in Dave what Dave sees in himself. The damaged kid who had no other choice but to blindly believe in his own skills. He’s an unlikely hero. In fact, he’s kind of an asshole. Barely this side of likable. But he surrounds himself with people who are. So. in doing so, we have to assume that they see something in him we can’t.

And, yes, it’s fun to see the guest stars, which include the likes of Justin Bieber, Macklemore, Benny Blanco and rappers, Trippie Redd, Young Thug and YG among others. But watching this awkward guy make his way through the world of mostly African American artists and constantly be the fish out of water is amazingly cringey at times, but also remarkably relatable. It’s never entirely clear whether we’re supposed to think Lil Dicky is a good rapper or is going to be the success he thinks he’ll be (despite seemingly trying to torpedo his own career in multiple ways), but the meta-ness of Dave Burd getting a show deal, having videos with tons of celebs in them and generally making a name for himself where others have failed makes us have to believe he’ll end up in a good place.

In real life he clearly fancies himself the white Donald Glover. And I imagine thinks of Dave as the next Atlanta. Well, he’s no Childish Gambino and he’s going to need some time before he’s up to Glover’s level acting-wise. He’s a better actor than some other non-actors of the past who have gotten their own shows named after them like Jerry Seinfeld’s, uh, Seinfeld and Norm Macdonald’s Norm. Let’s say he’s somewhere in the Louis C.K. Louie territory. But this is Dave Burd’s Dave. And though his character may have some of the same predilections as the real life C.K., he is unique in the landscape. After all, he raps for a living.