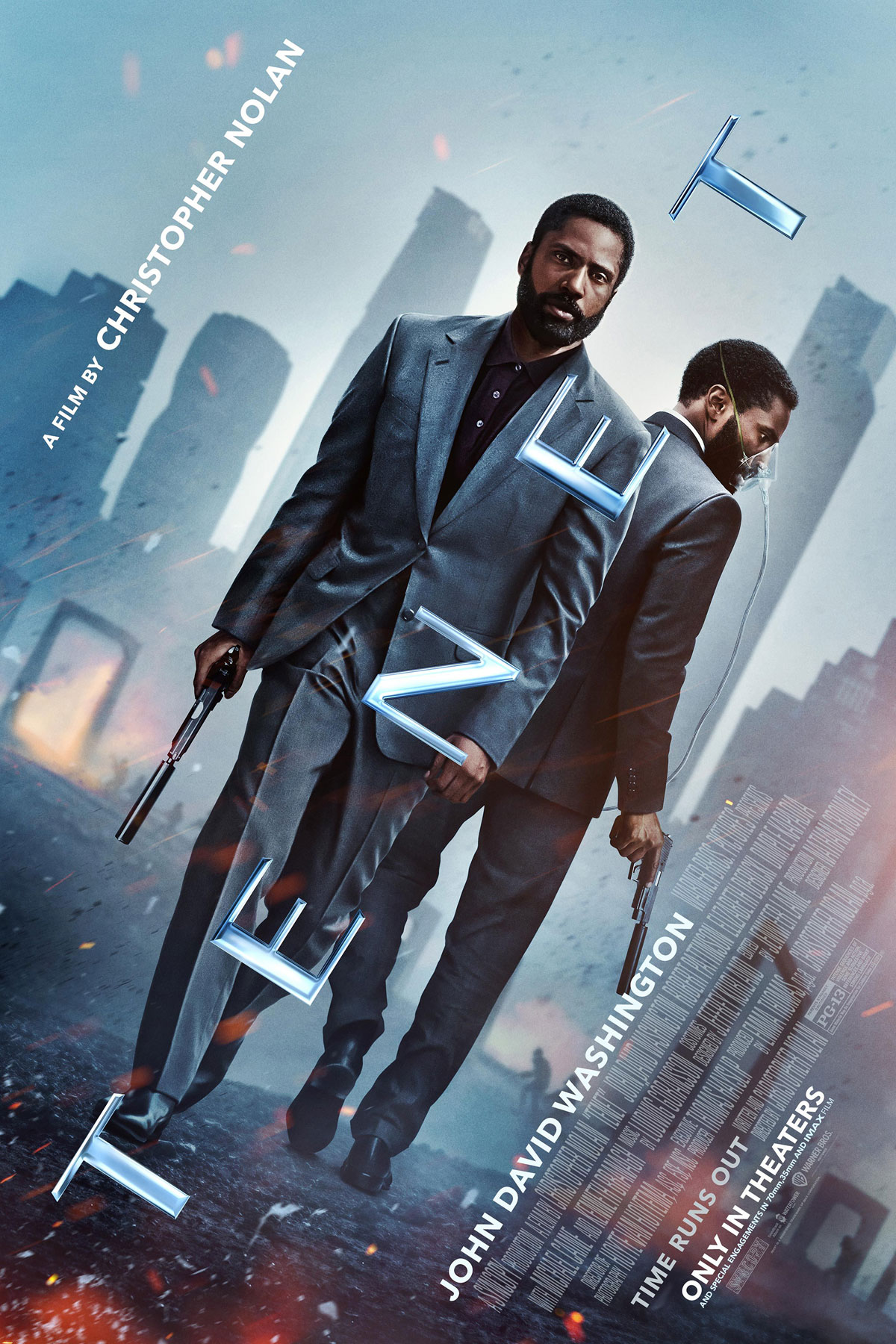 There are so many things about Tenet that have Mr. Hipster written all over them. With eight films, I’d go out on a limb and say that Christopher Nolan is the most oft reviewed director on this site. It all started for me with Memento way back in 2000, of course. And since then he’s experimented with time and dimensions and memory like no other. And, with Tenet, he kind of combined the nature of all of that. So you’d think I’d be really, really into it. But apparently I’ve gotten dumber (or less patient) in my old age and had so much trouble following the gimmicky nature of this thing that it ruined any enjoyment I might have had beyond the obvious spectacle of it all.

Look, I enjoy a challenge. Actually, I think I enjoy a challenge. Maybe I used to enjoy a challenge. I don’t know. But there’s a difference between a challenge and work. And Tenet feels like work sometimes. Most of the time. So much work, in fact, that connecting with the characters or the situations or anything else is next to impossible. The fact that the main character is named Protagonist (John David Washington) should be your first clue that character development is not even remotely a thought here. It’s all about the crazy, twisty-turny, folding-in-on-itself plot. The whole thing feels like an overworked diagram on a white board come to life. So if you like that sort of thing, this might be your bag. A movie that almost begs to be watched multiple times in order to have even 65% of an idea of what’s going on. Which, at two and a half hours, is a lot to ask of an audience.

I’m not even going to attempt to capture the plot here. Or even try to explain it. Other than to say that there’s something called entropy. I don’t really know what entropy is, but I’ll just pretend it’s the flow of time. Which I don’t think it is. But let’s say that typically the entropy of time flows from left to right. In Tenet, there’s a machine that allows people and objects that go through it to instantaneously start traveling from right to left. Thus working their way backward through time. So it’s not time travel per se. It’s just reversing the entropy of their existence. Or something. So when you’re traveling from right to left, you’re essentially swimming upstream against normal left-right entropy, so everything you see is happening backward. And you can keep going in perpetuity. So if you’re moving normally and you hit October 20, 2020 and then go through the machine, you would start working your way toward October 19, 2020 and then just keep going forever in that direction. Until you die of old age, I guess. So you could theoretically keep going backward past your date of birth… Which is weird. And not particularly relevent to this film. But still interesting. Also, because you exist in the past, when you reverse things, you can run into yourself. It’s a whole thing that involves paradoxes and shit that is mostly speculated by fans online and not really at all explained in the movie. Or maybe sort of?

And this is the issue, really. The inversion thing is such a critical concept and a key to understanding what the hell is going on in the film that the general lack of scientific rigor and the inability for expository thoroughness just makes for a really confusing time. Yes, it looks cool. But every Nolan movie looks cool. But in the scene where the Protagonist is taken to a lab and there is some actual expository stuff explaining how one can “invert” a bullet, it comes across as so over-the-top gimmicky that I definitely looked at the screen askance. The word askance, in itself, being pretty gimmicky. They do try to make things a little easier to understand who’s inverted versus who isn’t by coming up with some dumb law that says you can’t breathe air normally when you’re inverted, so you have to wear an oxygen mask. So people without masks are moving forward normally. Those with masks are inverted. Though I don’t recall anyone ever running out of oxygen despite the fact they’re clearly carrying very, very small tanks. Seems like a pretty big liability that if you get your mask ripped off you basically drown. Also, if your breathing is reversed, wouldn’t like blood flow from your heart also reverse and kill you? Like why would breathing be the only negative side effect? Because it’s selective sci-fi, I guess.

Man, as I write this, I feel like I have to go and watch it again. To be fair, I was too busy being dazzled by the Nolan of it all to focus on the minutia. But I was also not overly compelled by Washington’s character or performance. Nor very convinced by Branagh’s bad guy Russian accent. The two more interesting characters were Debicki’s and Pattinson’s. I’d seen Debicki and her praying mantis-like presence in The Kettering Incident and wondered what she’d been up to. Besides apparently playing the 5’10” Princess Diana in The Crown, despite being an incredibly spidery 6’3″. And Pattinson continues to pick pretty interesting parts on his way to his franchise turn as Batman. In fact, I think some of my detachment around the whole thing was, on balance, because I didn’t understand the stakes. I didn’t get what the hell Branagh’s Sator character wanted. And why he was willing to end everything for it. Or even, really, how he was going to end it all. And why and how he had this whole weird army of bad dudes at his disposal. It all felt very in the service of the inversion dynamic and dismissive of cogent explanations.

Ultimately I feel like this film was made with post-discussion in mind. The Reddits and the YouTubes. The discussion of its brilliance. Rather than being brilliant itself. Things left for speculation by the long tail rather than explained in the moment. It’s a document to be poured over, not to necessarily be enjoyed in the moment. This is what I took from it, at least. Until, like Inception, I end up watching it ten more times and having my own theory about if the top stopped spinning or not.