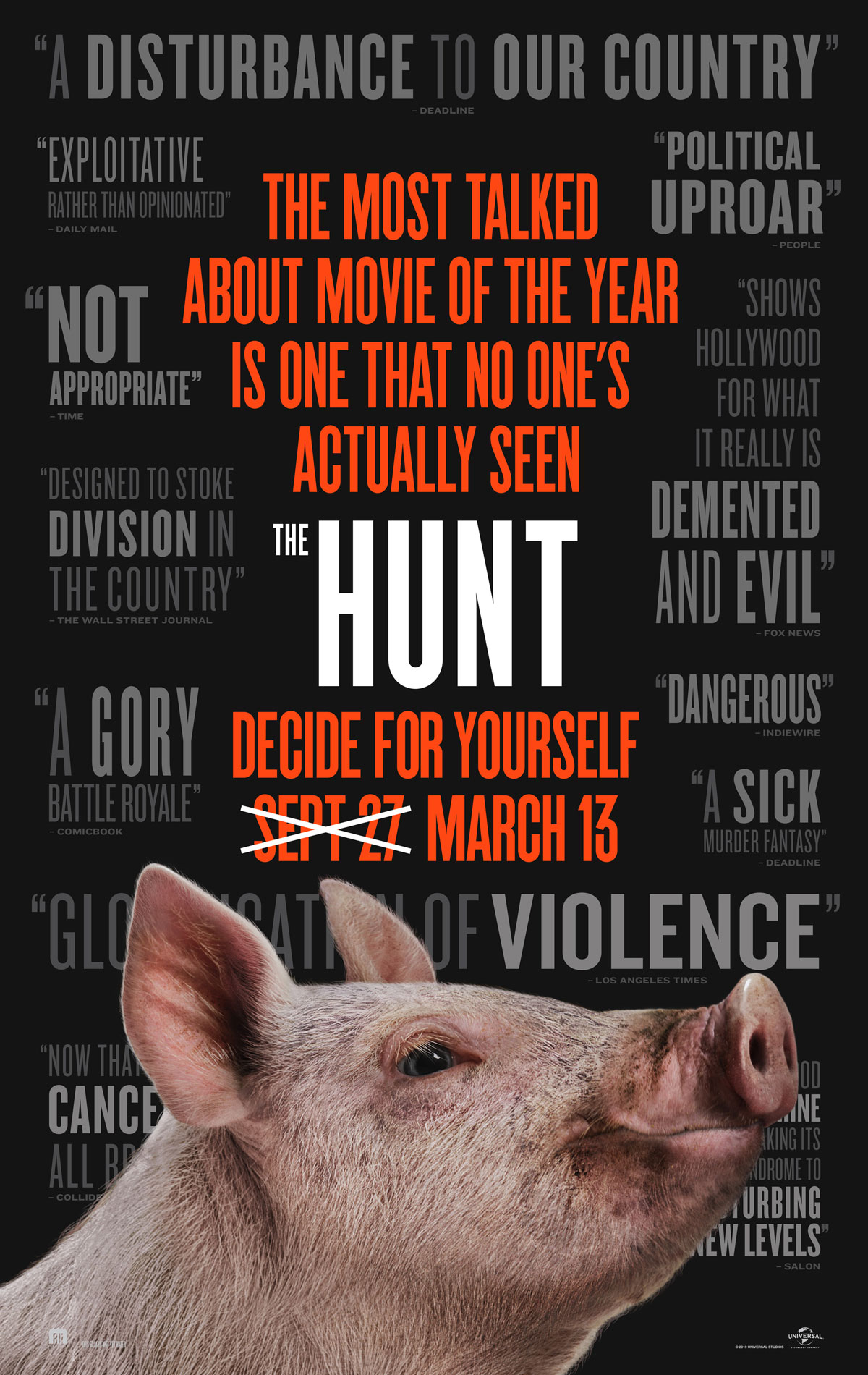 There was a time when “message” movies were subtle. Social commentary was subtext. Or whatever that word is that I learned in criticism class a million years ago. For instance, ostracized and locked-up aliens were the stand-ins for blacks during South African apartheid in District 9. Ok, not so subtle, but there is a long tradition of sci-fi and horror flicks using those genres to tell a more meaningful story under the surface. Be it about politics, mental illness, racism, etc. What the makers of The Hunt did was kind of turn that on its head and go maximalist with it. So I suppose it moves from political satire to a farce? Or like some sort of lefty fantasy? Honestly, I’m not really sure what the hell the intent here was other than riling people up in order to get some free publicity before its release. And, boy, with a clown in the White House and a group of fanatical followers who loose their fucking minds before even seeing things (because Hannity tells them to), they certainly got what they wanted.

Because if Trump’s goons actually watched the film, they’d realize that it’s actually kind of on their side. I mean, I’m sure we know where co-writer Damon Lindelof’s politics lie. But the bad guys here aren’t the basket of deplorables, but rather the “liberal elite” who are hunting said deplorables for sport. And, sure, some of those right-winger folks spout some racist-ass stuff and are generally caricatures of any Tucker Carlson or Info Wars audience any night of the week, but they are fleeting. It’s the entitled liberals who see themselves as soooo special who are really the focus of the film. And I’m sure mirror some of the folks that Lindelof and crew have run into at their “Hollywood Elite” parties. And, maybe, just maybe, they’re holding up a bit of a mirror to themselves as well.

So here’s your subtle plot: a bunch of rich people gather at a manor to hunt Fox-watching folks from red states. They knock out and then load a bunch of Walmart-ers onto a plane and then into a cargo container, give them some weapons to make it a “fair” fight and then proceed to let them loose on the ground of the manor in order to blow them to hell. Just rich people doing rich people stuff, I guess. But like waaaay over the top. As if the lib dream would be to snipe and firebomb the OANN army. The blood lust, the carnage, all in the name of political righteousness. The movie goes out of its way to make both sides look silly and hypocritical. But in making the rich blue staters look like such ridiculous mustache-twirling baddies it’s almost as if they’re saying they’re actually not mustache-twirling baddies. Even if they complain about oat milk while blowing some dude’s head off.

The movie itself is supposedly a horror movie. I’m not exactly sure how it slots into that genre, though. Other than the fact there are some gruesome deaths with exploding heads and whatnot. But horror? I honestly don’t watch a lot of scary stuff, so maybe I’m just not in the loop. This feels more like a very long episode of Black Mirror. A long, not very good episode of Black Mirror. The not good part isn’t necessarily the action — which is bang-bang and relatively well shot — but the cleverness of it. Its all too-too to the point of goofiness. Which is weird for a Lindelof project. He’s usually really decent at puzzle building, feints, misdirection and big emotional reveals. But here there’s none of that. Sure, there’s a twist of sorts. But everything just seems to exist to kill people in new and fun ways.

This thing really made a splash when it first got postponed and semi-canceled. But, like The Interview, the hype and noise around it turns out to be so not worth it. It’s just a movie. One that people have probably already forgotten about. Mostly because the reality of our time under President Deplorable was more of a horror movie than anything anybody could have possibly put on screen.