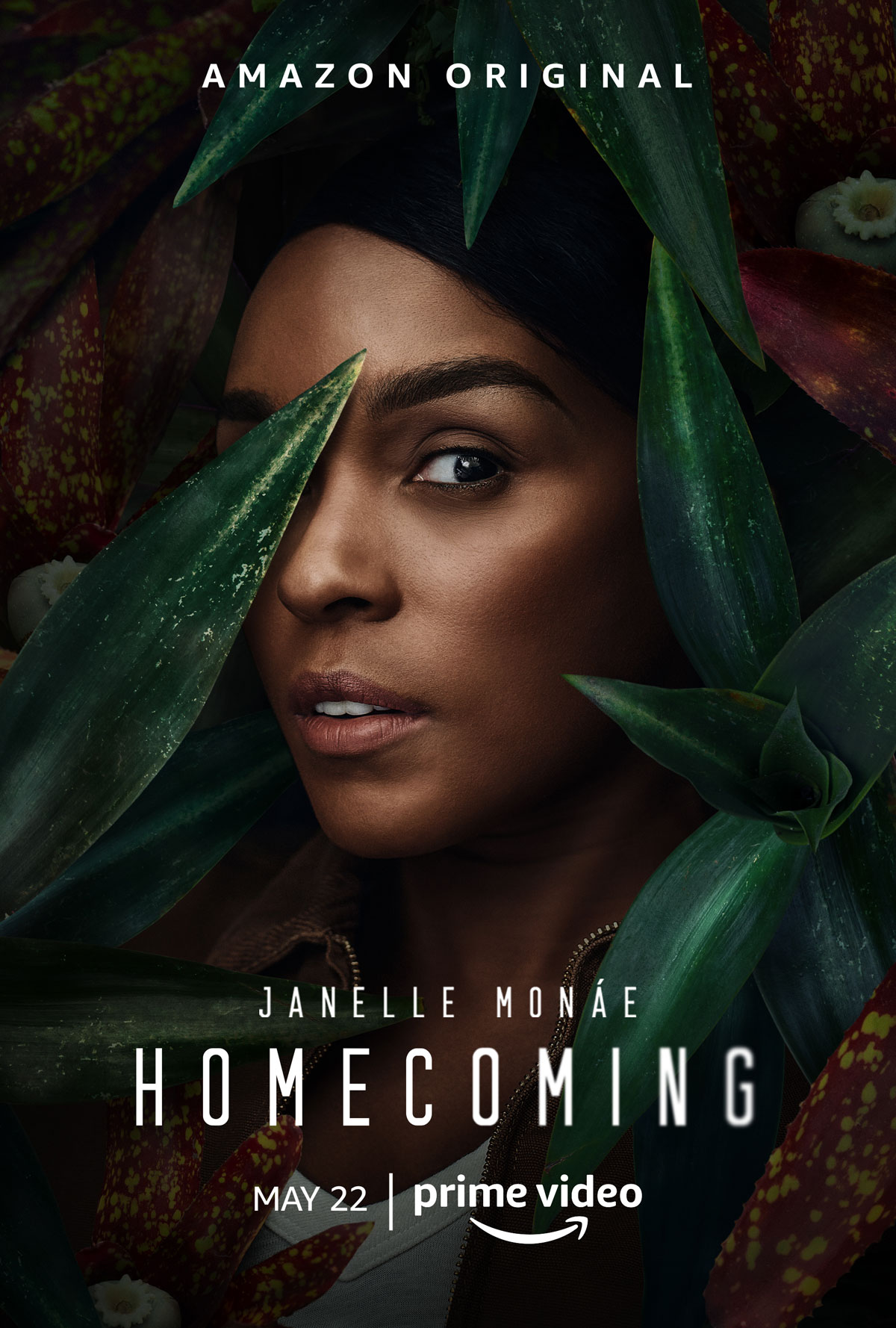 The first season of Homecoming was based directly on a podcast also entitled Homecoming. Now, the second season of Homecoming the television show plots its own course, taking on a narrative completely independent of the original podcast. I enjoyed the first season for the most part. It imparted a really strong visual sense based on Sam Esmail’s very distinct directorial vision. The story was a little muddy, just as the podcast was, but it was overall a pretty entertaining season of television. The second season, however, employed none of Esmail’s originality or sense of style and essentially tried to stretch what would be one episode of Black Mirror into seven half-hour episodes of TV.

Instead it feels like Amazon looked at the series as a good opportunity to create an anthology where they could hire a “hot” actor, put her face on the poster and kind of figure out the plan later on. In this case they put forth Janelle Monáe. It is undoubtably an inspired choice. Though certainly a bit of a risky one from a business perspective, considering you had Julia Roberts on the poster in season one. But it took the show from a generally homogeneous, Gen X place to a more diverse millennial audience. It’s not that Monáe isn’t a star in her own right, but, frankly, she ain’t the star that Roberts is. Not yet, at least.

So they swapped in one A-list older white person for a B-lister in Chris Cooper. Whom, gun to my head, I couldn’t tell you wasn’t Lt. Dan in Forrest Gump. Even though I literally just watched him in Little Women and horribly overacting in the Stephen King show, 11.22.63. Poor Gary Sinese must lose jobs to him all the time. And while he adds a little bit of gravitas to an otherwise young or little-known cast, his character isn’t really developed enough to move the needle. Although at least he doesn’t dial it up to 10 too many times in his limited scenes as Leonard Geist, the CEO of the shady Geist Corporation from season one.

[General SPOILER for Season One] Season one focused on a program for returning soldiers suffering from PTSD called the Homecoming Program. The program, such as it was, essentially fed them a drug that erased the trauma from their brain, allowing them to get past the PTSD and be re-deployed to the field. That was the program’s intention, at least. Government contractor, the Geist Corporation, ran the small test program and obviously strived to make it work in order to get a huge government contract.

Season two brings us into Geist through a relatively minor character, Audrey Temple (Hong Chau), from season one. It turns out Audrey is really just an assistant at the company, despite our understanding from the end of last season. [Shit, I guess this is all a SPOILER as well.] Her girlfriend is Alex (Monáe), who has a job that I’m really hoping doesn’t exist in real life. She works for companies to essentially talk employees out of suing them for things. Sexual harassment, discrimination, etc. She poses as an HR person, or at least a sympathetic third-party, and manipulates people into dropping their lawsuits or complaints. It certainly sounds like a real thing, but I’m hoping there aren’t people shitty enough to do that for a living.

Anyhow, through some total nonsense that would never happen, Audrey becomes embroiled in the aforementioned aftermath of the failed Homecoming program and has to run some cleanup to help the Geist Corp. out of a spot. Geist himself, despite being the developer of the mind-altering crop from which the drug is made, claims to have no knowledge of the Homecoming program, which was formerly run by the sniveling Colin Belfast (Bobby Cannavale). I guess we’re supposed to believe that because Geist is this ornery, but altruistic farmer dude who runs a biotech company whose main business is apparently making soap? Even though, again, he’s the dude who plants, cultivates and manufacturers the plant that goes into the drug used in the Homecoming project. Okay…

So, just when Audrey thinks she has the situation under control, our old friend Walter Cruz (Stephan James), a soldier from the Homecoming program in season one, starts making a stink and threatens to expose the program and derail the company by doing something. Though, whatever that thing is, I don’t know, really. As luck would have it, Temple has the perfect person to put on the case to go find out what Cruz knows and talk him out of making said stink: her girlfriend, Janelle Monáe! So convoluted, it’s hardly to be believed. And, again, sorry for that spoiler, but it’s pretty evident from the moment Alex/Jackie wakes up in that canoe with no memory of what transpired in her life to that point.

Anyhow, there is so very little that makes sense in this iteration of the series. The United States military gets involved in the Geist Corp, with the sole participant a goofy/wacky sergeant (or whatever her rank) named Bunda (Joan Cusack). Just tonally, it’s all over the place. The message is garbled and poorly executed and the logic in the plot is verging on absurd. Though it almost seems like the creators of the show know this. The whole thing feels rushed and half-assed. There are talking scenes with Monáe and Stephan James that are decent, as they’re both compelling looking and their acting is interesting, but even there the script spirals out and leaves you scratching your head. It’s as if they kind of wrote the thing as they went along.

It is true that they found a couple compelling actors in Monáe and James. The camera loves them, and they seem to have good chemistry. Chau is an odd choice in her role, but she’s quite excellent in keeping things going. Her nervous energy and subtle shifts in confidence are admirable considering how poorly drawn her character seems to be. In fact, that’s really the problem with all of the characters, save Alex. Their motivations and arcs makes no sense. They’re almost schizophrenic. Even Cruz, who was a relatively complex character in the first season, is a totally different man in this one. And not because he’s evolved, but because he basically serves to shoehorn in plot points. Just like the Bunda character. They knew they needed this military person who wanted to exploit Geist’s discovery for nefarious purposes, but threw in this weird character in Joan Cusack, who played it like a bad mixture of principals Vernon and Ed Rooney. It’s pretty terrible.

Ultimately, the show creators has some good elements to work with here, but fell down when it came to putting together a coherent narrative and bringing all those good parts into harmony. Plus, they have an ending scene that felt like a high school play in which the players seemed almost unfamiliar with context and content with which they were asked to work. It’s a giant mess predicated on a stupid premise and an unbelievable outcome. My eyes rolled so far back in my head I could see my stupefied brain ceasing at its inanity. After all that, though, I’m happy I watched it. If for nothing else to experience Monáe and hope that she puts her potential to good use in the future as the lead in something a little more worthwhile.