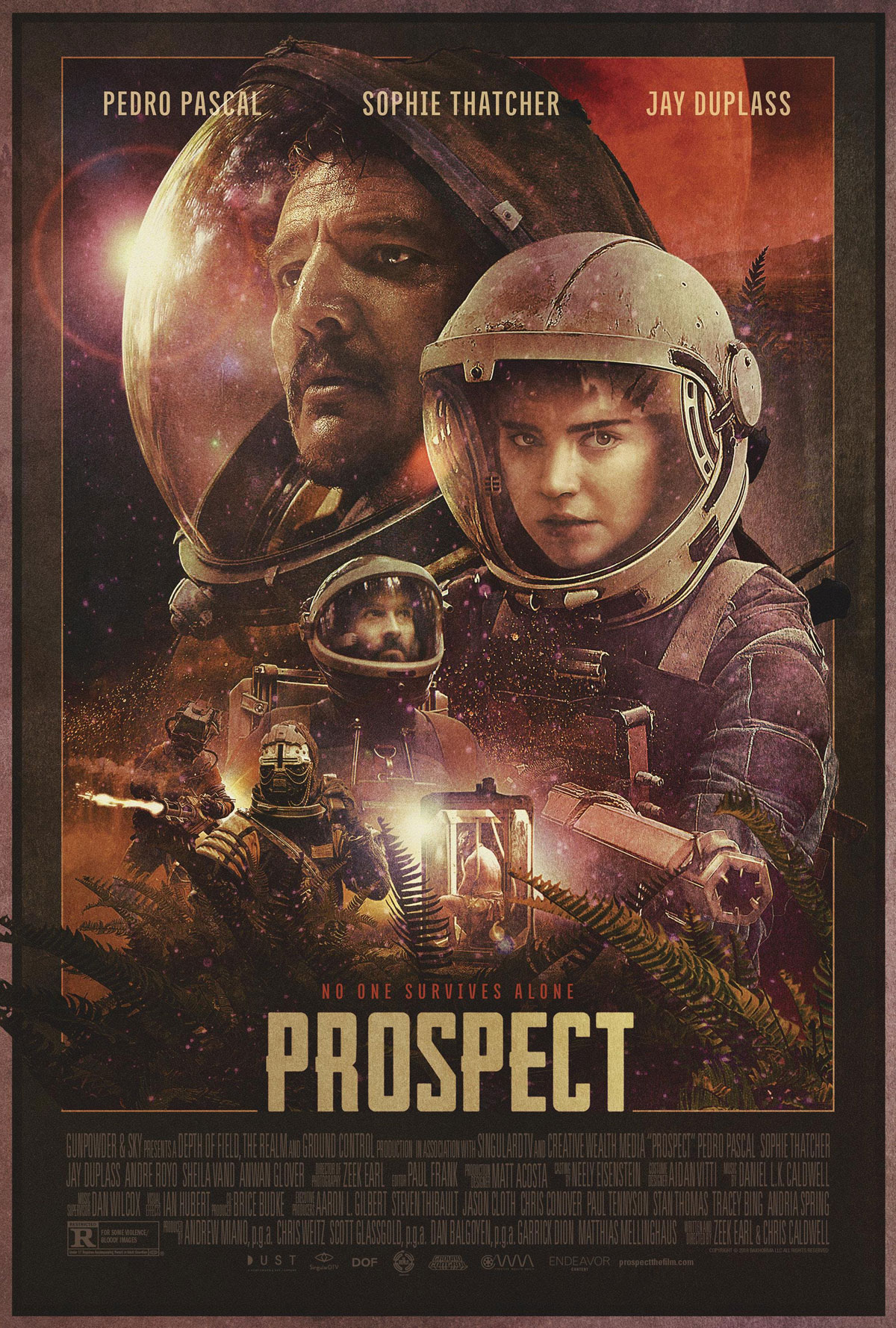 I guess my new thing is indie sci-fi. Or, more so, random sci-fi that I’ve never heard of until some streaming service recommends it to me because I continuously watch the other random sci-fi it has suggested. I suppose that’s exactly what algorithms are supposed to do. And that shit works on me. The latest is this oddball gem from 2018, Prospect. A movie that stars the man who seems to have invaded my media life of late, Pedro Pascal. The dude is everywhere.

Make no mistake, this is a low-budget affair. That certainly doesn’t mean it can’t be cool, though. In fact, making a sci-fi film on a shoestring may actually make it cooler. Mainly because they rely very little on CGI or any of the other things that tend to ruin modern space movies. Instead, they clearly poured their cash into practical props and, uh, Pascal’s salary, I guess? So rather than rely on the razzle-dazzle of computer-generated aliens and lasers and space ships and explosions and stuff, we get a more visceral, gritty approach to telling a futuristic story. Not that there aren’t some special effects, but the majority of the film feels like it could have been shot in the old west rather than an alien moon. The alien moon, in fact, being a forest in Washington state.

And here’s the thing about this movie: it does indeed feel like a bit of a western. Mainly in its relatively simplistic plot and the narrative itself. It boils down to, well, prospecting. There’s a dude (Jay Duplass) and his daughter, Cee (Sophie Thatcher). They seemingly live a nomadic existence aboard what amounts to a celestial train. Instead of just getting off that train when it stops, they release from the train in their drop pod and steer themselves down to whatever planet or moon they need to visit. And then when they’re done, they pod back up to the train before it leaves and continue on their circular journey around the universe. Otherwise living, it seems, in that drop pod, which remains attached to the train until they drop whenever they need get money from prospecting.

Now, what are they prospecting in this case, you may ask? Well, it ain’t gold. Instead, it’s this weird alien material that is organic, seems to live on this one moon and is very valuable. And difficult to abstract. In fact, only certain folks have the ability to extract said material without ruining it. So Jay Duplass is hired by some company to drop down to find the queen’s lair (which I misinterpreted as the queen’s layer), which is some mythical vein of this stuff that is going to make him and this company very rich. Two problems for Jay: 1. He is clearly addicted to some sort of futuristic space drug and is not making the most rational decisions 2. There are bandits down on this moon just waiting for prospectors to come along so they can rob them. Ezra (Pascal) is one such bandit. Well, he’s mostly a bandit because he was a prospector as well who is stuck on the planet because his drop pod was somehow rendered inoperable. This sets up the western thing, which eventually leads to a raid on a camp of mercenaries and more prospecting. And, when you think about it, it’s very much like what I imagine tons and tons of westerns are like. Although that’s not a genre I really wanted or needed to spend a whole lot of my time on.

At the heart of the story is Cee. A teenager raised by a father in a very confined space whose soul mission in life is to get money and apparently fuel his space drug addiction. While she has been raised in a very not-loving atmosphere, she still desires what most teens desire: music and fantastical books and affection. Her father sees all of those as a waste of time and instead trains her in survival skills and shooting stuff. So when she goes with her father down to this moon and encounters the oddly brutal, but sympathetic bandit in the guise of this odd Southern gentleman, Ezra, she is intrigued. I’m more intrigued about why they make Ezra talk like he’s in a Mark Twain novel rather than a normal human being, but I suppose it was a choice. Certainly a weird one, but a choice. Anyhow, as these things always go, Duplass ends up dead and the teenager and Ezra have to rely on each other to survive and get back to the space train before it leaves the station. Again, how many times have we seen the gristled bad guy dude and the savvy teen girl form an unlikely bond to survive in the wild wild west?

The pacing of the film is a little on the slow side. There’s an intricate method to prospecting this weird material, and we get to watch it step-by-step what feels like several times. It’s kind of interesting (and a little gross) the first time. But we get it; you guys spent a lot of time thinking about this and creating the practical effects for it, but we don’t need to see it that much. Inside the drop pod, there’s a ton of attention to detail in terms of the set design, but there is also a lot of superfluous flipping of switches and turning of knobs that borders on silly after a while. There was also a ton of time clearly invested in the weapons and the space suits the characters wear the entirety of the film, but very little in the way of explaining their purpose. Granted, the weapons are pretty cool and I think maybe magnetically propelled in some way, but we’re never really given a clear explanation of how they work and why they have the effect they do. Same goes for the suits and what exactly they’re protecting them against. I think there’s “dust” in the air — which seems to be a total trope in modern sci-fi films — which we can see and that filters in the suit somehow filter them out, but I’m unclear whether they’re plant spores or what. And why, somehow, just going inside a wimpy tent protects you enough that you can remove your helmet and breathe just fine. Spores, I guess.

Ultimately, this film is more a cool experiment in austerity than it is as a movie. There are little bits and pieces to take away as intriguing — including the introduction of Sophie Thatcher — but there are also too many weird quirks and sags to make it a success. In fact, in the final battle scene, there’s some dude in a glass box that exists and does some pretty critical stuff that I literally could not figure out. It’s like he was there to look interesting and then intercede in a coincidental and fortuitous way for our protagonists. Which to me just felt like either lazy plotting, bad editing or just a poor choice. Whatever the case, the whole thing is most likely a calling card for directors Chris Caldwell and Zeek Earl to prove what they could accomplish with not a lot of resources in order to land something bigger with a lot more.