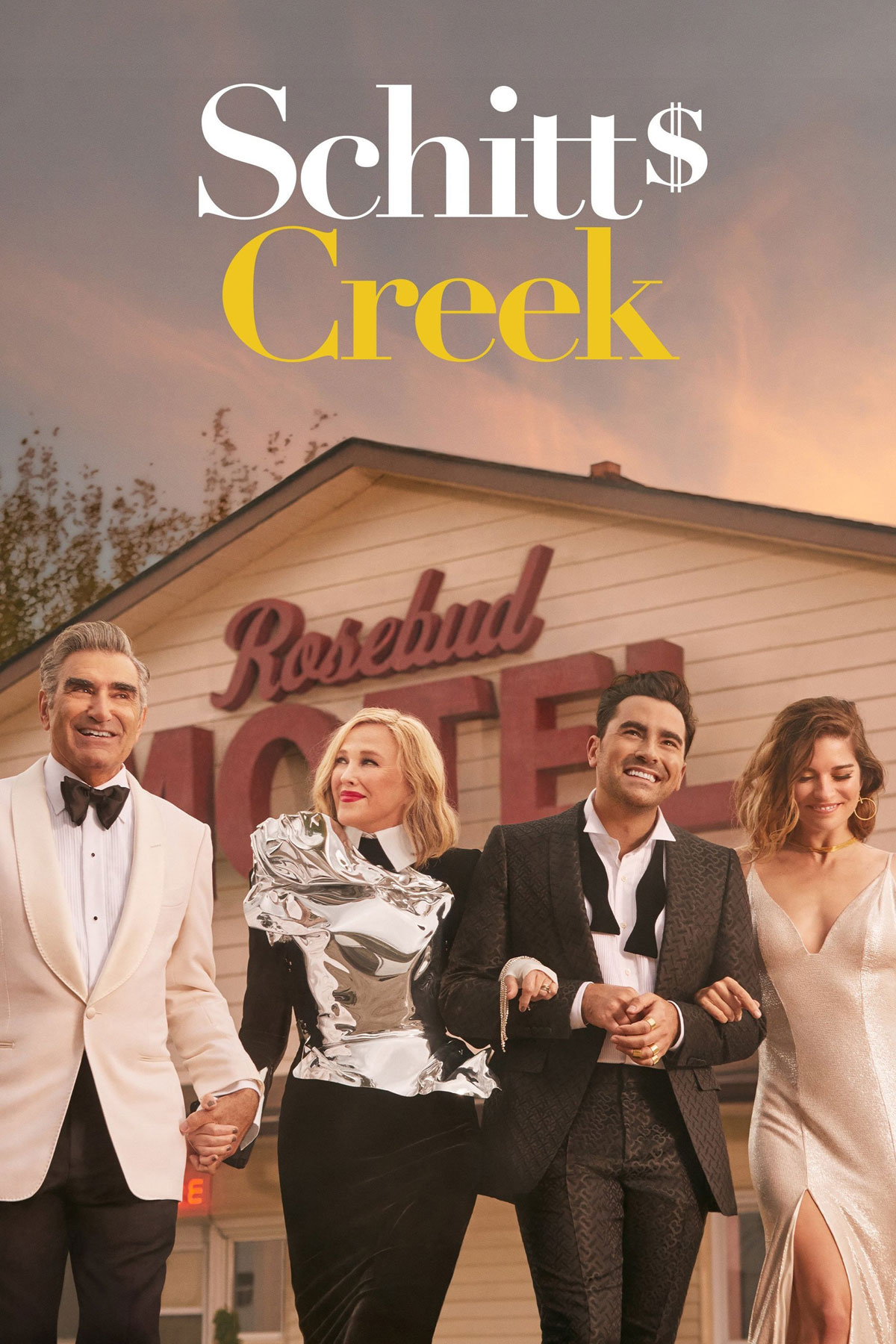 So, we really like this show, do we? There wasn’t a week that went by that I wasn’t told by some vague acquaintance, “Man, you gotta watch Schitt’s Creek!” I swear even the dude at my favorite halal cart bugged me to stream this show as he spread that lovely hot sauce on my chicken over rice. I’ve found that these series that seem to appeal to a broad audience do not necessarily appeal to me. My tastes aren’t snobby or weird, but I just so happen to be a curmudgeon when it comes to unfunny shows that purport to be everything from “hysterical” to “the funniest thing I’ve ever seen” to, like Schitt’s Creek, the savior of television as we know it. Because, ultimately, this show was meh.

And, frankly, sometimes it was worse than meh. It was predictable. And half-assed. And just straight-up boring. This for a series I watched six seasons of. I’m a conundrum. But a very stubborn one who is a completist and probably a little OCD about my viewing habits. Otherwise, why would I keep up a website for 20 years where I just catalog everything I read, watch and listen to? Even if it sucks. And it’s that, and only that, that kept me going on this one. Well, that and the fact the Hipster family watches TV every night while we eat dinner. And this show has less bloodshed, nudity and gross shit in it than most shows on TV, so it made for a decent distraction that wouldn’t make us barf or embarrass us as parents in front of twelve-year-old Hipster Jr. Jr.

Now, is this a reason to keep going with a series? Just because its vanilla innocuousness wouldn’t o-fend? I mean, not really. But I kept recalling those same conversations with Schitt-heads. The one that said you had to give it a little time and that the show got way better in the second season. Or was it the third? I couldn’t recall. But we just kept watching wondering when the thing was really going to shift into another gear. And there we found ourselves at the season finale wondering when the thing was gonna launch itself into the stratosphere. Turns out never. Nope, it cruised along in third gear for six seasons. A solid C+. Kind of cheesy and definitely unremarkable in just about every sitcom category. Shit, Bless This Mess was a much better fish-out-of-water, snobs-move-to-the-sticks sitcom than this. And that got canceled after two seasons. Proving that people were very desperate for entertainment during lockdown.

I’m sure you know the deal here. Rich family from NYC loses everything when their money manager makes off with their money and are forced to move to a town called Schitt’s Creek, PA that the patriarch, Johnny Rose (Eugene Levy), somehow bought as part of the crappy portfolio of investments his money manager put him on to. It’s a little yadda-yadda’d how he owns an entire town, and what that really means, but essentially it’s an excuse to take these jet-setting snobs and put them in a rundown motel surrounded by the likes of the town’s moronic mayor and founding namesake, Roland Schitt (Chris Elliott). At first the family is disgusted and freaked out by their predicament, but as we know will happen, they eventually grow to love and integrate into the out-of-the-way Pennsylvania town. Which is most definitely not Pennsylvania. Honestly, I know this thing was shot in Canada, but I thought back and I don’t recall it snowing even once in the years the family is supposedly living there. You know it snows in Canada. It most certainly snows in PA. So it must have been a conscious choice for it to never be winter or early spring there. Nope, it was always either t-shirt or light sweatshirt weather. Such a weird thing. And just another example of the shade of beige this series took on.

In addition to the complete lack of seasons in PA, it’s empirically obvious how limited the show’s budget is. Despite being single-cam, the entirety of the show is shot in the two motel rooms, the one town cafe and a couple other spots, including the motel office, the town hall and eventually the store that David Rose (Dan Levy) opens. We never see any of the other motel rooms, really. Characters talk about going to other towns, which we rarely see. We get glimpses of other spots, but they’re usually just a single setup and don’t last more than an episode or so. And, yes, I know this is a sitcom and not some big-budget HBO offering, but after six seasons, it starts to become pretty claustrophobic and one-note.

And, look, the one positive mark I have for it is consistency. So many sitcoms change writing staffs or lose a main cast member a couple seasons in, or get notes from the network or something and just go off the rails. They generally just go all machine-gun joke spray awfulness. The tone, the writing, the cast on Schitt’s Creek just hum along. If you liked season two, you’ll like seasons four and six. It’s the same thing, over and over again. Seriously. I think back and I cannot outline a single story arc that is in any way anything other than a flat line. Even the things — with the exception of Moira Rose’s (Catherine O’Hara) sojourn to Bosnia and Herzegovina — that I recall are so mundane and pedestrian that they all kind of meld together. And maybe it’s the Canadian of it all, what with their aversion to “drama,” but the show often feels like it’s coasting. The stakes are so super-low that nothing is in-and-of-itself compelling. Sure, the characters have a couple low points in their relationships, but those are about as shallow as Schitt’s actual creek. (Which, weirdly enough, I think we only maybe see for one second in one episode.) Case in point: the relationship between Alexis Rose (Annie Murphy) and the town veterinarian. We spend an exorbitant amount of time on that romance, and all I walked away with was a vague notion that he only dates her because she’s the only age-appropriate, semi-decent-looking option in town. And she only dates him because… well, likewise. But I think we’re supposed to feel something when they split? Hmm, not at all. Vanilla.

Anyhow, Eugene Levy plays himself. The kind of stiff, awkward guy. Catherine O’Hara plays her usually loopy, eccentric space cadet. But with a weird speech affectation, and, in later seasons, a flowery vocabulary and syntax that the show’s writers must have had fun constructing, but was pretty ludicrous. And inconsistent. Chris Elliott is always a weirdo, and always will be. Though he’s not allowed to be as weird as he can be, so his character feels a bit neutered. Annie Murphy is good, but her ditsy act gets a bit old after a while. She’s about a million times better in her newer role on Kevin Can F**k Himself. As she gets to show some range and not just be a floppy, self-absorbed ne’er-do-well. Frankly, I don’t really get the Stevie (Emily Hampshire) character at all. She’s a wall-flowery wet blanket. I suppose she’s kind of the straight man in all this, but shrugging and scrunching up your face 276,547 times in six seasons doesn’t an interesting character make. Dan Levy — who co-created the series with his father — is the most engaged performance-wise. His David character feels like a real human and is given a backstory that you could sense was reasonably authentic. Plus, he actually has some comic timing. Even if he too is asked to act with his face a lot. He’s a dude you recognize in all this. And is actually given a bit of an arc, while most of the others just kind of hang around the motel and exist.

Now, I’m not going to spoil the ending of the series. But suffice it to say, that the show continues on its very low-stakes path. Nobody is punished for bad behavior. Nobody really learns a lesson, really. Ultimately, nobody is changed by the experience. Except for David. Which I suppose is good. But otherwise I found the ending confounding and silly. I kept waiting for the bad news. And waiting. And waiting. And perhaps I’m scarred by modern television and its downcast outlook, but this one was just too much puppies and rainbows to feel meaningful in any way. It feels like the ending just undoes the entirety of the experience. And the lesson is somehow that privilege begets privilege. Or maybe I’m missing the point. But it felt weird to me. Also, sorry to go on an unrelated rant here, but did nobody in this town think that perhaps they could use a second eating establishment? Seriously. I was so tired of that cafe set basically being the lunch spot, the dinner spot, the romantic date spot, the business meeting spot, the work-from-home spot. Someone could have made a killing with one of those build-a-bowl salad places.

I’m going stop now. Mostly for the fact that everyone has seen this show. It won some awards and will probably remain popular on Netflix until the CBC starts their own streaming platform and terminates the foreign rights. Or however that works. And it seems most folks have a different take on this series than I do. To that I say, good for you. Good for you, sir.