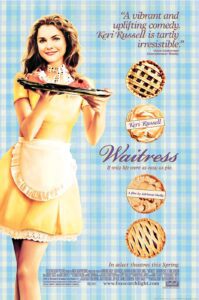 This thing had all the earmarks of a successful indie movie. It had some marginally recognizable actors, a simple premise about simple people and some built-in buzz due to the untimely death of its writer/director/supporting actress, Adrienne Shelly. Not only was Shelly murdered, but it was front-page stuff because of its bizarre nature. And, of course, there’s the whole Hollywood story that the press eats up about how she died right before her great triumph that would have catapulted her into the stratosphere was released.

As usual, I have to be the buzzkill and temper the enthusiasm and runaway speculation. While Shelly did make a cute movie with some quirkiness in it, she also made a film full of cliched characters, schmaltzy sentimentalism and a hokey ending that would put John Hughes to shame. The funny thing is that while writing this it took me several seconds to remember who the lead actress was in the film. While Kerri Russell is cute and a decent actress, she is just entirely unremarkable. She kind of blends in with several hundred other thin, blonde actresses of her ilk that line the credits of films and TV. I remember everyone else from the cast, but she just kind of slips your mind for some reason.

Jeremy Sisto, playing Russell’s controlling, backward husband is by far the worst thing about the movie. He is terribly miscast as a violent Southern working stiff who wants his woman ready with dinner when he gets home, a temper like an asp and a K-Car in the driveway. All I could think of was his character from Six Feet Under, which suited him much better. He should be playing psychotic intellectuals (like in SFU) or like hipster dudes. He and his southern accent just came off as fake. And his character and dialogue was straight out of the starter’s guide to abusive husbands. The character was written as subtly as Freddy Krueger. It’s funny that this was such a miss, as the casting of the rest of the film was terrific.

Shelly was great as the mousy waitress co-worker of Russell’s, as was Cheryl Hines as her other brassy co-worker, who was clearly based on the Flo character from Mel’s diner (and Shelly on Vera). Nathan Fillion is an underrated actor, whose hangdog looks make him look like a slightly confused Jason Bateman. He’s very good as the awkward gynecologist with a heart who eventually becomes our heroine’s paramour. It’s nice to see an actor actually pull it back and not go for the laugh or the big scene, but rather keep in the flow of the movie and maintain.

I’m sure the most common thing people mention about this movie is the use of the voice-over asides, which involve Russell’s character dreaming up pies to make to fit the situation. So there’s ‘I hate my husband’ pie and ‘Gotta poop’ pie. Okay, that second one is fake. These are kept up consistently throughout the first half of the film, but are all but dropped the second. These little things seem so integral to our character’s personality that it’s jarring to all of a sudden be shut out from her thoughts. Bad editing perhaps? More likely a freshman filmmaker whose career was cut tragically short.