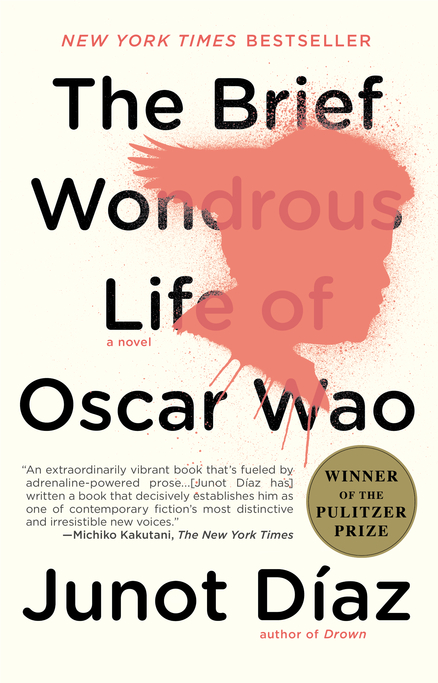 So chalk this up as another book that absolutely everyone loved that I thought was an overrated steaming pile of nothingness. Part of this may be my own doing in expecting something as clever as Edwin Mullhouse, which was just off the charts great. This book presents this Oscar Wao (a self-proclaimed ghetto nerd) as having a wondrous life. Was he like Forest Gump or something? No, he was a fat Dominican kid who wanted nothing more then to get laid and couldn’t. That’s pretty much it. Pretty wondrous, right?

I read Junot Diaz’ book of short stories, Drown, many years ago and thought to myself, “my god I’m too Caucasian to be reading this.” And here I am again finding myself not giving enough of a shit to struggle through the pigeon Spanish that Diaz doesn’t really seem to want to share the meaning of with those of us not attuned to particularly Dominican Spanish — which is about as close to the Spanish I learned in school as driving a go cart is to racing in the Indy 500. The language at times is impenetrable, and while this wouldn’t normally bother me, I found it particularly distracting in this case, as it seemed buried in those words were the heart of the story — the heart being exactly what seemed to be missing. Sure I learned all sorts of Dominican history, and got a serious dose of Dominican culture (neither of which I was particularly informed about), but for that I would have rather read a non-fiction book or watched a good documentary. So what was left once we tore away the husk of a history lesson and looked at the core of the story? Again, there was a confused kid who lived inside his own head, may have had a touch of Asperger’s and basically made a mess of his life — a life, if broken down into its parts, that is neither wondrous nor particularly interesting.

Also not interesting is our narrator, who is at the same time a key and a peripheral character in the story. And perhaps therein lies the problem. When this guy, who amounts to a family friend and sometimes boyfriend of Oscar’s sister (and is the polar opposite of Oscar) is actually in Oscar’s life, we feel we get a decent sense of him, but in tying this somewhat unreliable narrator to the entirety of Oscar’s life, we are, for a large chunk of it, looking from arm’s length and relying on what amounts to hearsay from this known player. That, plus the fact the narrative spirals off on a chapter by chapter basis to cover other characters’ stories, and is littered with tons of footnotes, works to distance us from Oscar on such regular basis that we forget why we’re supposed to care about him by the time the story comes back around to him.

And then I come back to the cultural thing. Perhaps the title is meant to be sarcastic or telling in a way that I’m not aware of. Perhaps his life is wondrous because he’s a Dominican man who can’t get laid — how bizarre and wondrous! Or maybe it’s wondrous because he’s a heady guy surrounded by dudes who clearly aren’t. Dunno. What I do know is Diaz spends at least sixty percent of the book describing the female characters’ bodies — mostly their breasts. It actually gets a little tiring hearing about this one’s boobs and that one’s boobs. We get it; dudes love tits. And if you got ’em as a Dominican woman, you can apparently rule all men around you — until it really comes down to it and they decide to smack the shit out of your pretty face. Lovely. Seriously, though, if a Jewish author wrote a book filled with all Jewish characters like this, the JDL would have people picketing his house calling him self-hating and a traitor. Now I know that Trujillo dude was an evil dictator, and all his cronies are evildoers, but there doesn’t seem to be one person in this book whom doesn’t either act with his dick or lady parts on a pretty regular basis.

Expectations are a bitch, and this book sat on my shelf for quite a while gaining more and more mystique as people mentioned liking it. Proves that nice surprises are sometimes better than the hype.