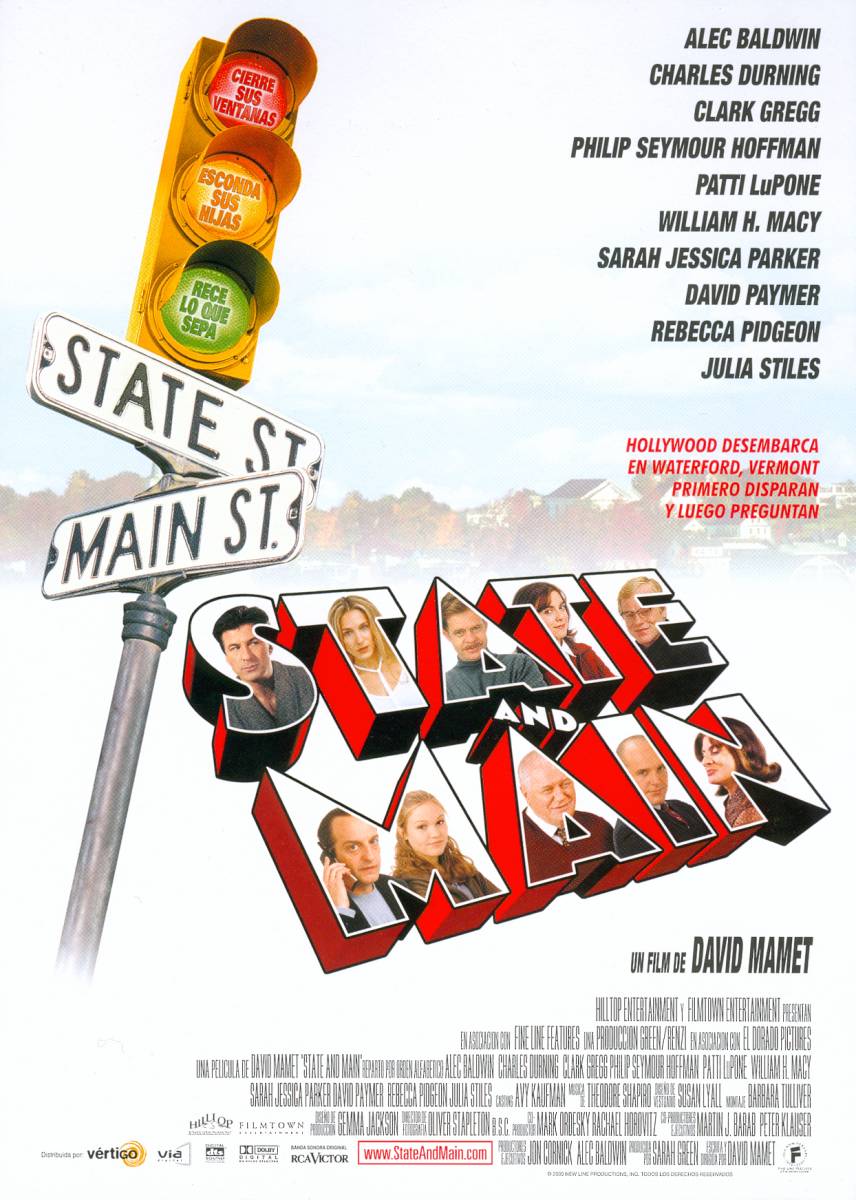 If you’ve ever seen a David Mamet film, you know exactly what you’re getting yourself into — a dialogue heavy film that will either put you right to sleep or amaze you with its witty repartee and acting right out of the Royal Shakespeare Company. State and Main is a little more lively than some of his other films like the positively sleepy The Spanish Prisoner, but it still depends heavily on the interactions of its characters and the subtle subtext of the dialogue.

As an actor, I’m sure people are thrilled to be in his movies, as he really gives them a chance to flex their theater muscles. Mamet is and always will be a playwright, and as such writes his movies as if they were plays — complete with monologues and very play-like dialogues. In a Hollywood filled with shoot-’em-ups and dialogue that makes Joe Eszterhas look like Thomas Wolfe, it’s actually nice to hear some intelligent words coming out of characters’ mouths for a change. It would also be nice to see a play like this on Broadway for a change, instead of yet another fuckin’ musical, but hey…

Mamet also has a penchant for getting great performances out of his actors. It helps that he generally hires pretty decent actors to begin with. William H. Macy is just awesome. The guy plays the perfect champ/chump. Here he plays the movie’s director, who has to deal with a cast of malcontents and a crew of eccentrics. He is both the lovable loser, the fast talking dealmaker, the used car salesman, and the gibbering idiot who knows how to pull all these diverse personalities together. Mamet gives him some great lines, including one when he is asked how the film crew is getting along with the locals: “Like dogs and dykes.” Yeah, I don’t get it either, but the way he says it, it’s as if it makes perfect sense. Listening to the audio commentary on the DVD afterward, both David Paymer and Macy express a fondness for the line, but also have no idea what it means. Now, that’s dialogue. Macy’s character also has to convince the female lead of the film not to leave. He tells this ridiculous story about this old-time actress that leads absolutely nowhere and basically has a horrible outcome, but it somehow convinces the actress that she needs to honor her contract and stay on the picture. You ever notice in typical scripts, a character always has a perfect story or anecdote at hand that fits another grieving or distraught character’s situation? Not here — and that’s what makes it funny.

Anyhow, the whole “big film company comes to a small town” idea isn’t exactly original, but Mamet makes it original by making his characters original. Phillip Seymour Hoffman is excellent, as usual, as the insecure screenwriter who must, of course, change his script to conform to demands and circumstance (the movie is called “The Old Mill,” but the town no longer has an old mill) all while battling his fear of selling out, finding love and wrestling with his demons. The overriding theme of the movie is purity, and every character wrestles with his/her own purity issues. The big male movie star (Alec Baldwin) loves the purity of teenage girls, the big female movie star (Sarah Jessica Parker) no longer wants to bare her breasts on film, the screenwriter (Hoffman) doesn’t want to compromise the purity of his craft, etc.

By the way, I know this sounds funny, but I think Alec Baldwin is an underrated actor. He’s very funny in this movie as the over-hormonal superstar. He plays it as if he’s a mix between Babe Ruth and a puppy (apparently it is his love of underage girls that forces the film crew to move to this new Vermont location from the old New Hampshire spot.) Enter Julia Stiles, and, well… David Paymer has been in a million movies, and does a great job as the violently temperamental and vicious producer, which he based on, as he says in the DVD commentary, a producer or two he has worked for. My best guess is that he based it on his experience working for Scott Rudin on Searching for Bobby Fischer (but, of course, I’m a little biased). Anyway, the film itself is a little on the light side, but the acting is great, the dialogue is good, and I didn’t even fall asleep.