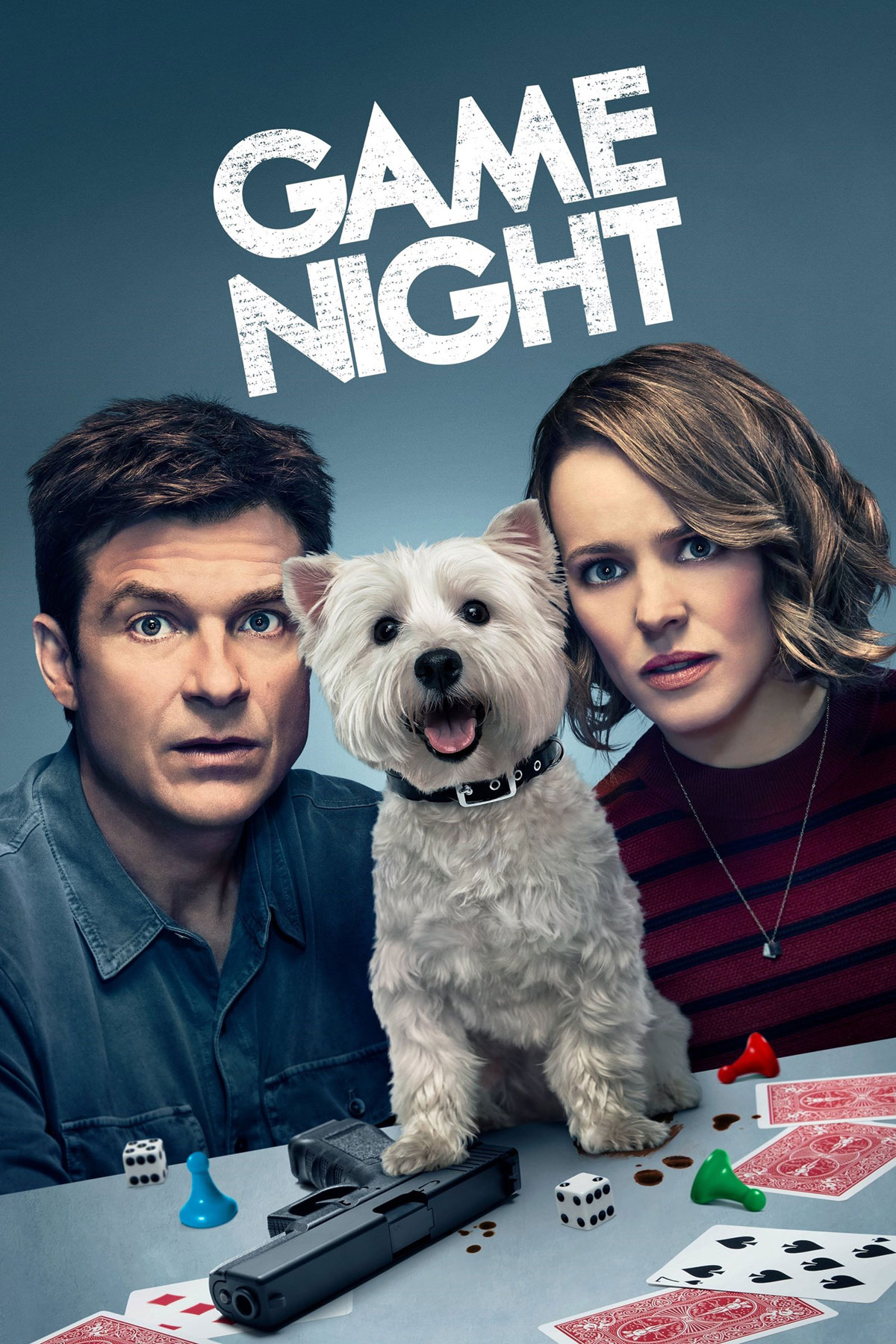 It seems like there used to be movies like Game Night made on the regular. The R-rated (or hard PG-13), adult pseudo action-comedy that mixes witty repartee with a couple or an individual who gets in over their heads. There’s a bunch of cussing, some slapstick, probably some scatalogical humor and always a dog. Just off the top of my head, there was Date Night, Keeping Up With the Jonses, Couples Retreat, Horrible Bosses and even stuff like Pineapple Express. There also seemed to be at least a hundred movies where one unwitting member of a couple is brought into the secret CIA, FBI or assassin life of his or her partner that leads to total wackiness. You know, True Lies, Grosse Pointe Blank, Mr. & Mrs. Smith, Central Intelligence, and on and on. Now, Game Night aligns more with the former category, as it’s ultimately a straight-up action comedy, but it also borrows some of the elements of the latter by kind of lampooning it a little bit. Max (Bateman) and Annie (McAdams) are awesome game players. They’re competitive and ruthless when it comes to gaming. They bend the game to their will. They trash talk and are basically the masters of their domain. But… this doesn’t mean that when the game turns real they’re going to be proficient at being what amounts to action stars. And therein lies the comedy.

Max and Annie are a typical modern, suburban couple. Childless and fancy-free. But, it turns out, they aren’t childless on purpose. Max apparently has a low sperm count because his older brother, Brooks (Kyle Chandler), is cooler than him… Yeah, that whole thing makes next to no sense, but we’ll go with it. Also, Bateman is almost fifty and is just thinking about having kids for the first time? Anyway, we’ll ignore the unreality of that whole setup and move on. Max and Annie host a weekly game night at their house that seems to bond them together in their competitiveness. There are several other regulars there, the ages of which are all over the map, but again, we’ll ignore that little fact. One night the cool brother, Brooks, shows up out of nowhere and offers to host the next week’s game night at the huge house he’s renting in town and offers his Corvette Stingray as the prize. The Corvette Stingray that he knows his low-sperm-count brother, Max, covets. Thus, presumably lowering his sperm count even more. It’s a power move that’s kind of funny.

Flash to the night of the “game.” It’s an interactive game that involves people breaking into the house, kidnapping Brooks and dragging him away to an unknown location that the participants have to find. Of course, it turns out it’s not really a game, but reality, because, surprise, Brooks isn’t the awesome dude everyone thinks he is, but is, instead, kind of a shady guy who gained all his wealth through shadiness. It’s unclear if any of the participants in the night’s activities has seen David Fincher’s The Game, but it’s clear the makers of the film have. The setup isn’t dissimilar. We’re now thrown into this scenario where we don’t quite know what’s real and what isn’t; what’s part of the game and what’s actually happening in real life. Which, of course, is perfect fodder for Bateman with his dry sarcasm and perfect Gen-X skepticism about just about everything and McAdams’ more high-strung physicality and ability to act with her face.

There are funny setups that involve the couple’s bizarre cop neighbor, Jesse Plemons, and plenty of small scenes with our main couple, but there was clearly some indecision about how dark to take the movie. The movie is literally dark, as it takes place exclusively at night and in dark bars, offices, streets and warehouses. But it also tries to break out of the goofy comedy movie thing a little by overcomplicating the plot, as if it was Lethal Weapon or something. It didn’t end with a crazy, drenched fight scene on the front lawn, but it did dip a toe into that territory, only to quickly withdraw it and rely on more traditional comedy-movie tropes. I’m still not quite sure how I feel about that. It was funny, sure, but it’s tempered with some of the clumsiness around the attempts to legitimize its “action” bonafides. It just feels like it could have been funnier if they’d lightened up a bit, uncomplicated the plot and taken more advantage of the supporting cast, which is great. Perhaps that’ll all come to fruition when they inevitably put a sequel on the table. Let’s just hope it doesn’t become the next The Hangover Part II.